Chocolate is so photogenic, I don’t understand why we don’t see it portrayed in movies and TV shows more often. Here’s my evidence that we need more watchable chocolate:

Movies with chocolate in them

Frozen, 2013. Animated retelling of the Snow Queen fairy tale in which 2 estranged sisters briefly bond over their mutual love of chocolate before a big misunderstanding separates them again and a bunch of other stuff happens. If you haven’t seen this movie yet, you have surely heard its songs sung by every preteen and younger girl on the planet.

In Search of the Heart of Chocolate, 2008. Documentary by Sarah Feinbloom, with local SFBA interviews and highlighting Chocolate Covered, the great chocolate resource on 24th St. in SF.

Chocolat, 2000. Juliette Binoche is a chocolatier who disrupts  a small conservative French town with a great chocolate lifestyle, and Johnny Depp is a free-spirited drifter who adds to the disruption. Lots of beautiful chocolate-centric scenes.

Forrest Gump, 1994. Probably the most famous quote about chocolate appears in this movie about an accidentally influential man, who first utters the quote with his mouth full of chocolate.

The Chocolate War, 1988. Based on the book of the same name, drama about the hazing of a new student at a private school, which includes selling or refusing to sell chocolates.

Consuming Passions, 1988. Dated black comedy by a couple of Monty Python alumni about a deadly mishap at a chocolate factory resulting in candies for the cannibal in all of us.

TV episodes with chocolate in them 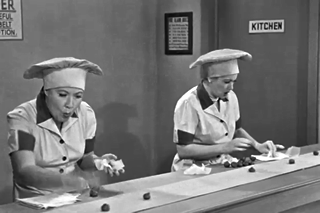 Who can forget this classic “I Love Lucy” routine?

Job Switching, (“I Love Lucy” episode) 1952. The classic comedy routine of Lucy and Ethel on the candy wrapping line is easy to find online.

The Theft of the Royal Ruby, (an Agatha Christie Hercule Poirot mystery) 1991. In the beginning of this story, Poiret (David Suchet) buys handmade chocolates from a London chocolate shop. Then must deal with the constant interruptions of a jewelry theft case that thwarts his attempts to enjoy his Christmas treats.

The Chocolate Box, (an Agatha Christie Hercule Poirot mystery) 1993. On a trip to Belgium (beautiful railway station and other lovely scenic shots), Poiret (David Suchet) reminisces about a case that “wasn’t solved” involving a box of poisoned chocolates. The chocolates come from the maitre chocolatier St. Alard (a friend of the family).

My Lovely Sam Soon (AKA: My Name is Kim Sam-soon), 2005. Korean rom-com about a French-trained Korean pastry chef falling in love with her boss. 16 episodes with a lot of chocolate involved.

The Blue Geranium, (an Agatha Christie Miss Marple mystery) 2010. Chocolate gets a bad rap in this one as a metaphor for the deadly sin of gluttony, but they make a pretty weak case as the character eating chocolates turns down the first box offered, insisting on truffles only. Seems pride would be the closer of the seven deadly sins here.

Dark Chocolate, (BBC “New Tricks” episode) 2010. Retired cops investigate a serial rapist whose first victims worked in a chocolate factory. The title is a bit misleading since it’s a British cop show, so the chocolate depicted is milk chocolate bars on factory tables. The only mention of dark chocolate comes when the old guys hassle their younger ‘guv,’ saying she probably likes to eat that boutique-y, 70% fair-trade “black tar.” As one of them says, “I want a chocolate that tastes like sugar.”

Three Act Tragedy, (an Agatha Christie Hercule Poirot mystery) 2011. In addition to a couple of men killed by poisoned drinks, a woman is killed by nicotine-laced chocolates.

Death of a Travelling Salesman, (“The Doctor Blake Mysteries” episode) 2013. A cop uses a brush with death to trick a woman he likes into feeding him chocolates while the doctor and the rest of the police investigate the death of a vacuum cleaner salesman via snake venom.

The Wrong Man, (BBC “Death in Paradise’ episode) 2014. An actress on a zombie movie set dies after eating the only poisoned chocolate in a box of chocolates.

Mr. Selfridge, season 2, episode 4, 2014. While the store staff prepares for war, Mrs. Selfridge and her friends host a benefit at the store that includes a chocolate rose making demonstration, a chocolate sculpture auction, and Belgian chocolate bonbon tastings in exchange for funds to help Belgian refugees.

Chocolate (“Don Matteo” episode), 2014. A pastry chef working at a chocolatiere is murdered. In Italian.

Choco Bank, 2016. 6 episodes. Stereotypical, tho’ short, K-drama about a young chocolatier and a banker working together to find love and a successful business. Lots of chocolate, but little chemistry between the leads, one of whom is popular K-pop idol Kai from EXO.

Chocolate in title only

Bread & Chocolate, 1974. Nino Manfredi is an Italian guest worker in Switzerland enduring the trials of Job in a Chaplinesque way. In Italian. I’m not sure if there are any actual chocolate-centered scenes, it’s been a long time since I’ve seen this.

Like Water for Chocolate, 1992. Mean mom stands in the way of true love, but food is the ultimate conduit between two lovers who aren’t allowed to be in the same room together. Anybody remember any chocolate in here? In Spanish.

Chocolate, 2008. Soooo boring action movie about an autistic super fighter. I admit I didn’t watch it all the way through to see if there was any actual chocolate in it. In Thai.

Chocolate: Deep, Dark Secrets, 2005. Bollywood version of “The Usual Suspects.” Haven’t seen it myself, but as I understand it, no actual chocolate was involved in this story. In Hindi.