Stephen Durfee, pastry instructor at the CIA (Culinary Institute of America at Greystone), St. Helena, will be representing the U.S. as the “chocolate expert” on our 3-person team in the Coupe Du Monde de la Patisserie in Lyon, France in January 2013. 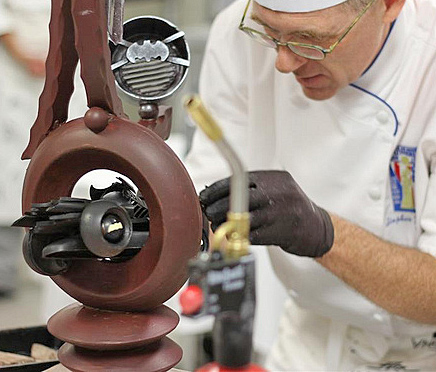 Stephen Durfee readies the Batmobile in his chocolate sculpture that includes the Bat Signal. Photo from the Grand Rapids Community College website.

Dubbed “The Greatest Worldwide Competition For Pastry Professionals,” The Coupe Du Monde de la Patisserie, or World Cup of Pastry, has been likened to the Academy Awards. Each competing country is represented by three experts: a pastry chef, chocolate maker and an ice specialist. They are judged by a 21-member panel of pastry chefs (most with the title of Meilleur Ouvrier de France, or Best Craftsman in France) on their technical, artistic and performance skills over a single day on a set number of desserts.

To earn his place on the team, Stephen had to compete against three other top U.S. pastry chefs, April 20-21 in Grand Rapids, Mich. With the given theme of communication, he designed and created three elaborate pieces with a Batman-influence. (Think “the Bat Signal.”)

If you’ve seen the movie, Kings of Pastry, this event is similar. The judges are members of the same organization and wear those distinctive collars. But the World Cup happens every year; and as the name implies, it’s a worldwide competition. The Meilleur Ouvrier de France, Pâtissier Competition on the other hand only occurs every 3 or 4 years and is focused on French chefs.

According to the CIA’s website, Stephen is a Certified Executive Pastry Chef and has worked there since 2000. Before that, he was  executive pastry chef at the Michelin-rated 3-star French Laundry. He won the 1998 James Beard Award for Pastry Chef of the Year and was named one of the 10 Best Pastry Chefs in America by Pastry Art & Design and Chocolatier in 1999.

Congrats to SFBA local, Stephen Durfee, for making it through to the final rounds. We look forward to whatever he will make to surprise, delight and impress the judges in Lyon.