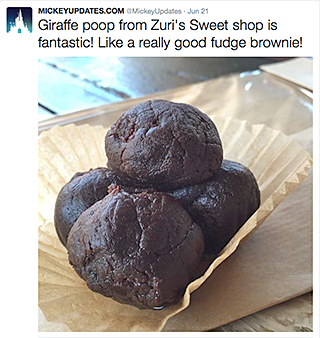 Somebody’s idea of a new fun way to eat chocolate.

This seems so wrong, I can’t ignore it. According to the New York Daily News, this month Disney World in Orlando, FL, has been selling chocolate treats shaped like animal dung.

They don’t name them as such, instead the “Match the Species” desserts are labelled with the names of animals. For example, “elephant” is a blob of chocolate peanut butter fudge rolled in oatmeal and coconut flakes. “Giraffe” is smaller pellets of caramel chocolate fudge. But just one look and you know this isn’t some chocolate version of animal crackers.

I’m not sure what public reaction at the park was like to these new treats during the 2 weeks they were sold at Zuri’s Sweets Shop in the Harambe Marketplace of the Animal Kingdom section, but as of June 29, 2015, Disney will no longer be selling the faux poop. 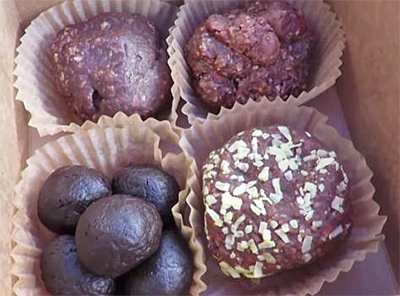 Putting the “gag” in gag gifts, Disney’s “Match the Species” desserts are supposed to look like poop.

If you’re sorry you missed this limited-time treat, watch TheTimTracker and his wife Jenn try all 4 types of the scat-themed desserts in Eating Animal Poop At Disney’s Animal Kingdom?!? (You can stop watching after 6:37 when they ramble on to other areas and topics.)

Date posted: June 29, 2015. This entry was posted in Featured, News. Bookmark the permalink.