A spoonful of chocolate helps the medicine go down 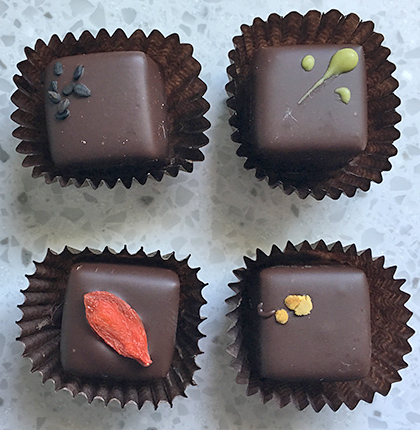 For example, Summer is a blend of matcha green tea, known for being full of antioxidants, and fresh mint, which aids digestion. A dash of matcha and white chocolate marks the piece. Spring adds rose, honey and bee pollen to the dark chocolate to boost your immune system and maybe help in the romance department.

But none of those ingredients seem like TCM to me. I’ve made and drunk TCM brews myself when they were prescribed by my acupuncturist. The ingredients hand-packed in brown paper bags were not recognizable to me, except in a dried-sticks-seeds-powders way, and the long simmering process smelled up the house — definitely not in a minty or flowery way. And the taste — strictly a hold-your-nose-until-you’ve-drunk-it-all flavor that required a palate-cleansing chaser immediately afterwards before I wanted to breathe again. It was all “good for you,” but not good tasting.

Chocolate to the rescue

Since I couldn’t imagine how the flavors I remember (bitter dirt is the closest I can come to describing them) would work in chocolate, I asked Wendy Lieu, co-founder and chief chocolatier of Socola, how this box came to be.

She told me that the chocolates were developed in collaboration with 5Yina, a skincare company based in Richmond, CA. 5Yina makes a seasonal skincare line based on traditional Chinese medicine. They use TCM-infused oils for their products.

Wendy met one of the founders of 5Yina, Angela Chau, when she presented her with the 2016 Monarch Leadership Award from the Pacific Asian American Women Bay Area Coalition. The awards are presented biannually to “recognize emerging API (Asian Pacific Island) women leaders.” Wendy won the award in 2012, and is also involved in their Catalyst Fund (more later).

“I presented Angela with the award, and got to know her and her company,” Wendy said. “Afterwards, Angela asked me if I would be interested in creating chocolates using TCM that 5Yina could give to their customers.

“I grew up taking TCM — black soups and herbal remedies — when I was sick. I never thought about those tastes for chocolates. It sounded interesting, but I wasn’t sure.

“5Yina’s skin care line is focused on every season, using botanical ingredients from each season,” Wendy explained, so “Angela and Ervina (Wu, 5Yina’s co-founder) came up with lists of seasonal ingredients used in TCM. I worked on the combinations. We went through several revisions before we settled on each seasonal piece.”

A pinch of this, a dash of that

While Wendy has a long familiarity with taking TCM, she wasn’t familiar with all of the items on the lists: “They told me what elements would go with each season — it was a list of herbs, powders, tinctures, and other things.”

She had to do some research and experimentation. For the Spring piece, she explained, “I came up with rose and honey, I’d seen that before; but I added bee pollen, which was new.”

The Spring piece is a very nice chocolate. It has a small sprinkle of bee pollen on top. The first flavor is sweet chocolate, with a nectar-like flavor like honeysuckle. The rose flavor comes at the end; it’s light, not a heavy perfume-y aftertaste like rose flavoring can be. Wendy explained that she used dried roses, not an extract. “I treated it like a tea, so it’s subtle, mild.”

The piece that is most evocative of TCM is Autumn. It’s a blend of chrysanthemum, osmanthus & goji. Goji berries are commonly used in TCM to temper the bitterness, and the Autumn piece has a dried berry on top as well as goji berry infused in the cream. It’s a different kind of sweet than more common dried fruits. One bite and its medicinal flavor brought back memories of TCM teas, but instead of gag-inducing herbs, the other flavors are mildly floral (from the chrysanthemum and osmanthus) and chocolate!

I definitely prefer this to any TCM I have brewed in my life. And the health benefits according to 5Yina include repairing oxidative damage (chrysanthemum), skin rejuvenation (osmanthus), and long life, better kidney function and brighter eyes (goji).

“Chrysanthemum and goji were familiar flavors,” Wendy said, “but I’d never had osmanthus before,” which she described as floral and delicate like chrysanthemum. I’d describe this piece as TCM-lite.

The Winter piece is flavored with black sesame and he shou wu, another medicinal botanical that Wendy wasn’t familiar with. She described it as an earthy flavor. I thought the piece was mostly chocolatey, but slightly metallic and woody with an astringent, slightly tongue-numbing after-sensation. Definitely a new chocolate-tasting experience for me.

According to 5Yina, the black sesame seed that decorates the top of the piece and is also ground into the ganache “is rich in beneficial minerals and phytosterols to promote healthy bones, skin and hair,” and he shou wu is an “herb that boosts energy and nourishes the blood. Known as a youth-preserving tonic.”

My favorite piece is the matcha-and-mint Summer. It’s another strong chocolatey piece, but it’s also immediately very minty, almost like spearmint gum. Next you feel the powdery texture from the matcha and get a subtle green tea taste. I haven’t had this combination before and I really liked it, whether it aids my digestion or not.

She might have it again at other times, but she explained, “We have to vary what we offer. There are some things we always have, but I always have different projects I’m working on. This one is really cool, I love it. It’s meaningful, because it has a connection to my childhood. TCM was very much a part of my growing up, but this shows it in a different light.”

Eat chocolate for a good cause

If you miss the limited-time TCM collection or are just looking for Asian flavors that are a little more mainstream, Socola has you covered with flavors that range from tropical fruits to tea and coffee. And if chocolate is a guilty pleasure for you (but hey, health benefits, remember?), then ease your guilt by choosing the Catalyst Collection, which includes Jasmine Tea, Give It To Me Guava, Passionfruit Vanilla Bean and Vietnamese Coffee. In addition to the enjoyable flavors, you can be proud that 10% of the proceeds go to Vietnamese NGO The Catalyst Foundation.

Happy Anniversary for everybody

In addition to the special TCM chocolates in the month of February, Socola is celebrating their Socola 3-Year Store Anniversary, Friday & Saturday, 2.10-2.11.17, with free French press coffee and cognac truffles all day.