Local “start-up upstart” Dandelion Chocolate gave a presentation on the making of chocolate from bean to bar combined with a tasting, Jan. 31, 2012, at 18 Reasons in the Mission District. The always interesting presentation was loaded with personal tales and insight won from experience by Todd & Alice of Dandelion.

UPDATE: Due to the positive response to the Chocolate 101 presentation at 18 Reasons, Dandelion does the presentation once a month at their factory. Check their website for dates and to reserve a spot. 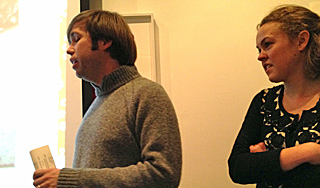 Todd (Masonis) started Dandelion Chocolate with Cameron Ring in 2010 in their garage. Alice joined a year ago. They have since moved operations to a kitchen in SF’s Dogpatch neighborhood, and are currently building their new space, which will be their chocolate factory and a chocolate café on Valencia St. in the Mission neighborhood. If we’re lucky, we might see it by spring/summer 2012. (Although in the world of SF business & building permits, one has to be patient, very very patient.)

Dandelion makes bean-to-bar chocolate, meaning they import the beans, then roast, grind/conch, temper, mold and wrap each bar by hand. They even go so far as to code the bars by the bag of beans they came from and sign each bar they make. This is not a sign of OCD or pretentiousness — instead it is aimed at helping the consumer find what they like in the very particular world of artisan chocolate.

How the other guys do it

Also, most chocolate makers add extra cocoa butter (not Dandelion), which makes the tempering step faster; but at least in the States, most makers don’t create their own, they buy it from a big distributor. This cocoa butter is “deodorized,” meaning it has no flavor or aroma of its own, which is what the other chocolate makers want so their chocolate can be more consistent.

This quest for consistency in taste and mouth-feel is also the reason for a lot of the additives in chocolate, such as vanilla (used to mask other flavors) and lecithin (the miracle ingredient: it reduces viscosity! controls sugar crystallization! improves shelf life! is cheaper than real chocolate!).

Consistency is also the reason for some unnecessary roughness in the handling of cacao beans on their way to your chocolate bar: As Todd explained, cacao is one of the few foods we eat that is both fermented and roasted. So many chocolate makers will under-ferment (to minimize bold flavors) and over-roast beans — basically burning them. Add Dutch processing (kinda like washing the beans in lye) and/or the previously mentioned additives and you can achieve consistency.

Does consistency make a great-tasting bar?

The answer from Dandelion seems to be ‘No.’ Instead of aiming for consistency, Dandelion works to bring out the unique flavors of each bag of beans they receive. In addition to making singular batches that display different flavors, they are also known for their dark roast 100% bars, which are mellowed by a longer conching process. (If you want a high cacao content bar, but find them too bitter, check this one out.)

Their process is similar to the new coffee roasters’ process starting from working closely with bean farmers. In fact, Alice had just recently returned from a trip to the farm in Madagascar where they get the beans for their single-origin Madagascar bars.

It takes a village to raise a bar

Dandelion is committed to developing strong relationships with their cacao growers. Todd & Alice described the multiple benefits of this:

“Farmers tailor the fermenting and drying process to their clients’ requests,” Todd said. And, Alice added, “Most Madagascar beans come from this one farmer so the different flavors come from their processing.”

By having a direct relationship with the growers instead of buying through middlemen, Dandelion can influence how their beans are handled to get the results they want. They can also influence how workers are treated and even how the cacao industry survives. “The typical farmer of cacao is much older and not passing on their skills,” Todd explained. “But people are engaging with farmers now so they see it is valuable.”

In response to a question about whether Dandelion was fair trade chocolate, Todd said, “Fair trade is geared toward large operations. Our goal is to form a direct relationship with the farmer instead so that we know their practices. With fair trade, the farmer gets 2 cents out of every $1. The rest goes to the middleman. Plus most of these beans are junk [because the farmer is guaranteed a certain price no matter the quality].”

Todd & Cam started Dandelion after selling their tech business, but they didn’t leave their interest in technology behind: They “built prototype machines by tapping into the maker community on the Internet,” explained Todd.

The proof is in the bar

So does all this attention to the entire process make a difference? For the 20-30 people at the tasting, it seemed to. We started with a range of other makers’ chocolates from dark to white to compound (i.e., chocolates adulterated with transfats —blech), then transitioned through tasting ingredients (or in the case of cocoa butter, just rubbing it on our hands) and chocolate processing stages (chocolate liquor does not taste like liquor-filled chocolates, but instead is grainy & bitter). 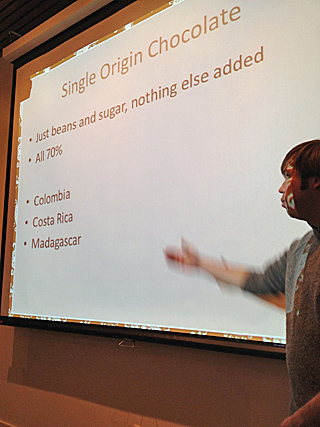 Finally we got to taste 3 Dandelion 70% single-origin bars: The first made with beans from a cooperative in Columbia was described by tasters as super chocolate-ly, very smooth, nutty, and not fruity. The second, of Costa Rican origin, was described as raisin-y, fruitier, and a little floral. The third, from Madagascar beans, was a redder color and was the lightest and fruit-est tasting of the evening. Todd shared a fun fact about that color: “Red Velvet cake used to be made with cocoa powder only and was naturally red.”

This was followed by a lively Q&A session in which we learned not only how they decided on their name (“We named the company after an upstart and a weed,” Todd said. ”And it’s also about nostalgia, it reminds you of childhood. It’s beautiful because it’s real and grounded, not fancy or anything else.”), but about the fungus that is devastating Costa Rican and Mexican cacao crops (“If it ever gets to Africa, even Hershey’s bars will be $40,” Todd predicted.) to other chocolate makers they like (Fresco Chocolate, Colin Gasko of Rogue Chocolatiers, Askinosie and Mast Brothers).

Other interesting topics covered in the presentation included an explanation of why you shouldn’t be too concerned with a chocolate’s listed percentage: “Percentage can be from anything from the beans: the nibs, cocoa powder, cocoa butter,” explained Todd. “It’s not comparable from manufacturer to manufacturer. What’s important is who is making it, what’s their style.”

Todd & Alice ended with a description of their new space: “It will be a chocolate factory with a café in front, so you can see the process and get a hot chocolate. A hundred years ago there were chocolate houses and coffee houses.We’re bringing back the chocolate life.

“We won’t be serving food, we’re only going to do things that we are great at. It’ll be an open space, no schedule, no tour, just come in and ask questions.”

As for what to expect chocolate-wise: “There’s a movement now to brew cacao like coffee. We will have a representative version of that. We plan to offer 5 different kinds of chocolate drinks, including a European sludge-like version and a Swiss Miss light foamy version along with the brewed cacao.”

One Response to Beneficial weed grows in SF