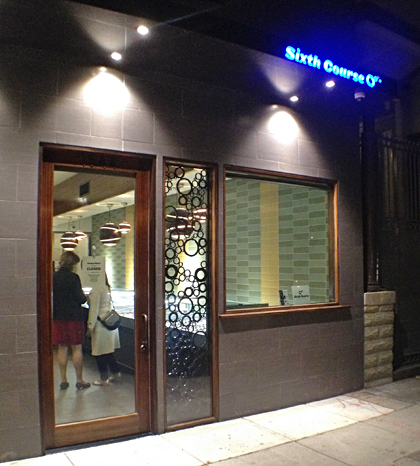 Stop by Sixth Course before you call it a night.

Sixth Course Artisan Confections opened their shop + kitchen at the end of October 2014. Cacaopod & I visited recently during their opening celebration and got to see their amazing space, eat some delicious desserts, and visit with the owners.

(You do not have to read any further. Just trust me when I say if you like chocolates, gelato, and elegant dessert pastries, get over there now. This is not to be missed.)

Just approaching the door is a visual treat. The space was designed by G. Paoletti Design Lab, who also did local restaurants, Maven and Bloodhound. And it has that look of an understated, elegant restaurant. 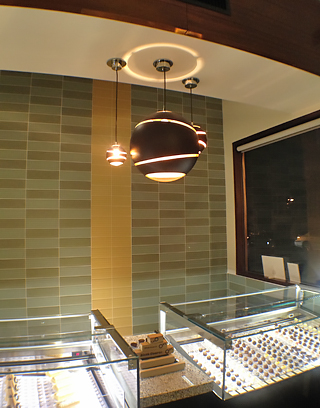 Another unique visual touch: the chandeliers which play on the company logo’s circle theme.

To get the full effect of the lighting and beautiful surfaces (glass tile wall, chocolate brown wood trim,  terrazzo counters), go in the evening. Coincidentally, it makes an ideal end to a meal — skip dessert at that Mission restaurant you’re at and walk over here to get an adorable gelato pop or a sized-just-right chocolate & caramel torte or some truffles.

The design of the space incorporates circles that evoke Sixth Course’s logo. For instance, a tall street window is filled with different sized circles like chocolate bubbles, and the chandeliers make the circles 3-D and kinda retro mid-century modern.

Walk inside and immediately to your right is a case full of perfect chocolates. Bridget Labus, co-owner, told us that they plan to carry their full line of truffles here, including 5 rotating seasonal truffle flavors. When we were there, the new flavors were Amaretto, PB&J, Pumpkin Spice, Lemon Verbena Caramel, and Bourbon Maple Pecan.

Count on finding Sixth Course’s regular assortment of chocolates, plus 5 rotating seasonal choices in the case by the front window.

The Amaretto is one of their truffles with a whipped ganache center. (They also make traditional ganache and caramel centers.) Whipped is my new favorite chocolate texture — especially for alcohol-forward truffles (a Sixth Course specialty). It makes for a more ethereal taste.

We also really liked the Pumpkin Spice, with a taste and texture similar to pumpkin pie. And the Lemon Verbena caramel was very pretty and had a clearly lemon flavor, but it’s in white chocolate (not my fav), so to me it’s more of a candy than a chocolate.

I want to recommend some of their regular flavors. The unusual-sounding Rosemary Caramel works. It’s is a good balance between dark chocolate, caramel and rosemary. The rosemary is infused into the caramel, cutting the sweetness, and the thick caramel helps the taste of the rosemary linger. It’s a memorable, vegetal, herb-y truffle.

And if you like dark chocolate and coconut, try their Coconut. It’s like a really good Mounds bar that tastes like it has a hint of liqueur. If you’re celebrating, get the Champagne Fizz, it’s a milk chocolate truffle with a champagne infused ganache (with pop rocks!) and shiny real-gold flakes on top.

They also make their own gelato on site. They have their own pasturizer and make their own base in a separate room in the kitchen that reminds me of the clean room I saw on a tour of my dad’s company when he worked in the aerospace industry back in the 60s. (Yeah, my dad was a rocket scientist). In addition to the hovercraft and the guy demo-ing a jet pack, the clean room made a big impression. A room with no dust? Inconceivable. And now it’s just best business practice in the food industry? Unbelievable.

And this is not simply tubs of different flavors you order by the scoop. Instead, Sixth Course makes small popsicles of house-made gelato enrobed in chocolate or other coatings and hand decorated just so. We tried the Mint Stracciatella, which is mint gelato covered in dark chocolate decorated with a pattern of irregular white blocks like square snowflakes. Very refreshing and a perfect-size dessert. 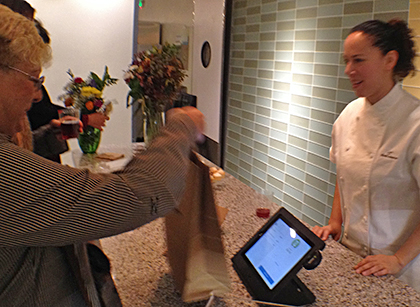 Gianina Serrano, Briget’s partner, explained that, “Portion control is important to us, and at this size the gelato is playful, adorable, even the popsicle stick is cute.”

We agree. There’s plenty of cool minty chocolate to enjoy, but not so much to make you sorry you ate it.

Another frozen dessert they make is the semifreddo, which Gianinia described as, “Like cake and ice cream had a baby.” 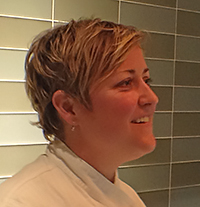 I’ve never had semifreddo before. Bridget told me it’s not something you see often, except maybe on some restaurant menus, possibly because it’s a little more labor intensive than other desserts. The name means half frozen, and Bridget described it like a frozen mousse, usually made with a cream base, sometimes with meringue.

The semifreddo desserts at Sixth Course have a cream layer on top of gelato on top of cake. We sampled the Mimosa Semifreddo, which was described as Champagne semifreddo drizzled with blood orange syrup over vanilla sponge cake and topped with orange pop rocks. It had a light orange flavor. The texture reminded me of frozen custard on top of a ladyfinger. And the pop rocks on top ended with sparkles in my mouth. A fun dessert. Again, the portion size is nice – not giant, but not too small.

All this, and pastry too

Coconut passion fruit tarts line up across the counter.

But that’s not all. They also offer pastries, made fresh daily on site. Bridget told us that when they were planning their store, they quickly realized that just selling chocolate was not going to pencil out, so they decided to offer other things they liked to make and that they couldn’t find in shops in San Francisco. Hence the semifreddo and gelato pops, but also upscale dessert pastries.

And they have the training for it. Both Bridget and Gianina have 15 years of experience as pastry chefs, and Bridget started making chocolate right after culinary school. Gianina’s experience is similar: “I attended City College’s culinary program, and I continue educating myself at the French Pastry school regularly. With this shop and this kitchen, we fell back into making stuff we love to eat and what we wanted to see in pastry shops around here. ‘Oh, I wish there was so-and-so here’ and we can do it!”

Boy, can they do it. At their opening, they had mini-versions of 4 varieties of pastries, and we tried them all. The apple-sage tart, which I think is a regular menu item, had a crisp pastry shell surrounding a slightly crunchy, sweet apple filling with a subtle sage flavor just at the end. The chocolate caramel tart had a similar crisp chocolate pastry shell with a smooth caramel pudding-like filling and crunchy nibs on top. Under a cute meringue topknot, the coconut & passion fruit filled the crunchy pastry shell with a blast of coconut first, then the passion fruit took over and lingered.

But my favorite that night was the chocolate, orange & hazelnut. This is the chocolate dessert, with the orange as a subtle fruity note, not screaming orange. If you think you don’t like orange chocolate, this might change your mind.

Part of our swag that night was some chocolate sugar cookies, The cookies are beautiful, thin scallop-edged discs with hand-decorated icing. Each one is different: individual cookies might be stamped with leaf designs or have a combination of stamped and hand-painted images like a deer in the woods. Gianina said, “One of my favorite things are sugar cookies, and with our own space, I can make them year-round.”

Their goal is to “become a go-to place for dessert,” Gianina said. “And eventually we plan to hold classes and demonstrations here.”

They should have no problem doing that. Although there are only a few seats in the small shop in front (due to city zoning restrictions), the shiny, new kitchen in back is large. Gianina said, “Ask any chef. Their dream is to have a space big enough to spin around in.”

You could fit a whole line of whirling dervishes in there. And everything is on wheels, so it’s flexible. For example, they can set up the large work tables in one long line when they need an assembly line for the upcoming “chocolate season” – Thanksgiving through Valentine’s Day.

So it’s not just a spacious, pretty space; it’s also been well thought out. Bridget told us that they planned to do this for years. Construction alone took 2-1/2 to 3 years. And there were many issues to deal with from the zoning restrictions to power consumption.

Besides, they had to carefully ration electricity: “The display cases and chocolate machinery use a lot of electricity. Then there’s the cold storage and the gelato machine. Plus HVAC and lighting…” Gianina explained. “We were close to our max for electricity, and it would cost $90,000 to add more.”

And there’s the seating restrictions: “We would love to get a parklet,” Bridget said. “But the city is not accepting applications right now.”

These are the kind of issues that create hurdles for small businesses that want to open in SFBA, but Bridget and Gianina persevered and now they are part of the Mission District’s hip food scene, which includes other great chocolate shops like Charles Chocolates and Dandelion.

“People worried that there are already chocolate and pastry shops in the Mission,” Gianina said. “ ‘What about Dandelion? What about Craftsman & Wolves?’ But it’s not about competition here, it’s community.”

And everybody is doing something unique, creating a critical mass of chocolate destinations here that make for some fun exploring. We may not meet Paris yet in terms of quantity of chocolate spots, but with Sixth Course’s arrival, I think we’ve filled a niche for quality, upscale chocolate & dessert boutiques.