As of mid-June 2012, Gâteau et Ganache bonbons are available at CocoaBella’s stores in the Westfield Shopping Center and Union St., SF. CocoaBella carries a variety of artisan chocolates from around the world, including a sampling of local favorites. Gâteau et Ganache, an award-winning South Bay chocolatier, is the latest local addition. 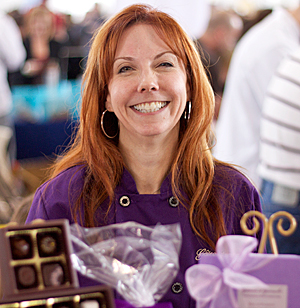 Learn from a master

Anni Golding, Gâteau et Ganache’s owner & master chocolatier, will speak at the Union St. CocoaBella, July 26, 6:30PM, about her approach to chocolate making. There will also be a tasting of her featured bonbons. Tickets for the event are available through Brown Paper Tickets.

Anni, who studied in France, makes flavor-intense chocolates because, she said, “I hate having to go back to the box to know what the flavor is.”

We tried her La Marguerite bonbon at the 2011 SF Chocolate Salon. It contained Tres Agaves Blanco tequila in the chocolate ganache and was topped with a dusting of lime zest and salt. The combo created a burst of lime nicely balanced with the chocolate.

Gâteau et Ganache bonbons are made with quality ingredients like organic local fruits and cream, and her flavors come from either infusions or purees. We CBTB chocolateers highly recommend Gâteau et Ganache and are very happy that they are now more widely available.