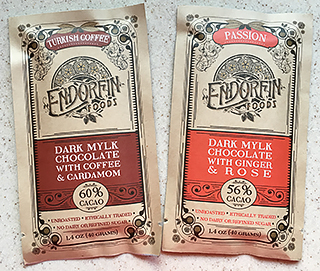 That’s not a misspelling on Endorfin flavored bar packages.

Endorfin Foods, is a Berkeley-based chocolate maker, whose chocolate is almost raw. It’s not roasted, but it is fermented. This minimal processing maintains more of the health benefits of cacao than traditionally processed chocolate, while tasting better than raw chocolate.

Endorfin chocolate is free of dairy, soy, gluten, GMOs and refined sugar. It can be eaten by people following vegan and paleo diets. Endorfin’s “Mylk Chocolate” bars use coconut milk instead of dairy (hence, the alternative spelling of milk to comply with federal laws).

Endorfin’s founder and chief chocolate alchemist, Brian Wallace, has 3 degrees in science and studied chocolate at Ecole Chocolat and in Costa Rica. He started Endorfin in 2013, shipping out boxes of chocolate, similar to CSA (community supported agriculture) boxes from local farmers. Endorfin still offers chocolate subscriptions, which in addition to including items from their regular line, often have unique seasonal, experimental or otherwise one-of-a-kind chocolate items, such as chocolate-covered fruit, truffles and barks.

Endorfin products are available online, and their bars are sold in stores across the country.