From tree to bar

There’s a lot to artisan chocolate these days, from chocolates made with locally sourced ingredients to unique ingredient combinations, from raw chocolate to single-origin bars, from hand-crafted to DIY equipment.

And then there’s Claudio Corallo, who seems to be doing it all and more because he’s making chocolate from cacao he grows on his own trees combined with other locally sourced ingredients (including ones he grows himself, like coffee beans) in the small West African country of Saõ Tomé & Principe (which consists of 2 islands and is the 2nd smallest country in Africa).

The only thing he’s not handling is marketing & sales, which is where our local angle comes in: Alegio Chocolaté is his U.S. distributor. 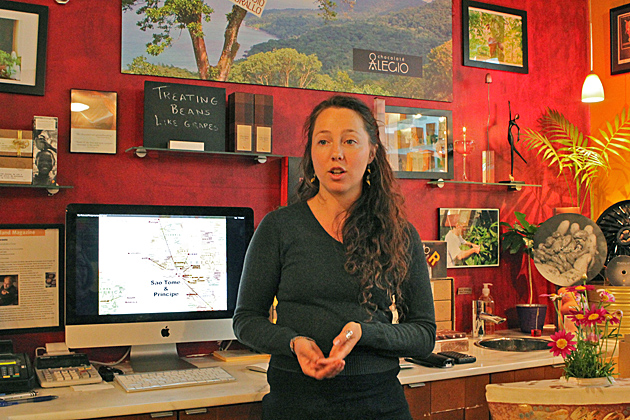 A business that grew organically

Claudio, originally from Florence, Italy, came to cacao through coffee farming and the need to escape war. He’d studied tropical agronomy before buying an abandoned coffee plantation in Zaire (now the Democratic Republic of the Congo). In Zaire, he worked with almost-extinct coffee strains, met his wife and had 3 children.

In 1997, he had to give up the coffee plantation and leave the country due to revolution and regional war. His wife and children had already left, moving to Saõ Tomé & Principe, a poor but democratic country. Claudio followed and soon started his next business, cacao farming, which was already the country’s main source of income.

Cocoa trees had been exported to Saõ Tomé & Principe from Brazil by the Portuguese in the early 19th century. The Portuguese king was losing control of Brazil, so he sent cocoa seedlings from Brazil to the islands.

He also sent over slave labor from Africa to work the cocoa plantations; and by 1908, Saõ Tomé was the largest producer of cocoa. But by 1909, international revulsion at the treatment of cocoa laborers was so high that British and German chocolate manufacturers boycotted the cocoa, and the local industry went into decline. It never went away, however, but now most of the cacao grown there is sold to mass-market manufacturers.

Claudio began using heirloom species of Forastero cacao trees that had survived decades of neglect in the encroaching rainforest thanks to the local monkeys who ate the pulp in the cacao pods, spreading the seeds in the process. While Forastero is considered the least valuable type of bean (Criollo is the finest and rarest, while Trinitario is a hybrid between the other 2 types), Claudio puts a lot of energy into making his stand out.

Perfectionist in every step

Because every step of the process from plant to finished product is done in one place, Claudio can control the results to a high degree. To give us an idea of Claudio’s process, Petra Lamberson, Alegio’s Chocolate Ambassador and our tasting guide showed us highlights from a BBC “Full On Food” video about Claudio.

The “Claudio Corallo Chocolate” video starts with a trek through the jungle to find ripe cacao pods. This plantation is nothing like the image we have of traditional Southern plantations. This is a hilly forest with cacao trees scattered over the entire estate in nothing approaching logical order. Harvest is more like a treasure hunt, and Claudio is willing to wait for each pod to be perfectly ripe before harvesting it.

The rest of his process is similarly labor intensive and time consuming. Instead of a focus on maximizing profit, Claudio seems intent on maximizing the chocolate experience.

Typical of his process is that after separating the cocoa beans from the cacao pods (by hand of course), fermentation of the beans in boxes covered with banana leaves (local of course) takes 15-20 days, which is 2-3 times longer than standard fermentation. Obviously not as profitable, and it also increases the chance that the beans can go bad. But since flavor is the highest goal, it’s worth the risk.

After fermentation and open-air drying, he sorts out the best beans to continue processing — which starts with a 90-mile, 2-hour boat ride to the other island where he’s converted a few jungle bungalows into a factory.

On the second island, roasting, like the rest of the process, is done by trial and error – Claudio’s not a recipe-following type of person. There’s no timer for the roaster – they go by taste and smell to determine the end of roasting.

The epitome of Claudio’s perfectionism is probably the next step: As workers break the beans into nibs by hand, they take out the germ – a small pencil-lead looking piece. Claudio is the only one in the industry who does that. The germ is hard (nibs are soft), and not chocolate-y tasting. We know because Petra gave us our own beans to break up, and we tasted the germ once we found ours. We can see why Claudio would want to remove it, but it certainly adds to the work — they are tiny!

With all the hand labor involved in his process, it should be noted that Claudio’s chocolate is all Fair Trade. He provides jobs, but as he says, “The only children I use are my own.”

Also, while his chocolate is not raw, it’s minimally processed. After grinding the nibs in small batches, local sugar is added (no vanilla, no soy lecithin, nothing else) and the chocolate is spread out to finish. He does not conch his chocolate, a process that mellows strong flavors and increases the smoothness of the chocolate. As a result, Claudio’s chocolate is bold with a bit of texture.

Is it all worth it?

Claudio Corallo chocolate only comes in dark, but Alegio carries the full line from 70-100%, plain to Ubric (“drunken raisin”), so you have lots of choices to find your “favorite Claudio.”

Petra led us through the line from darker to lighter, starting with the 100%. We found it very intense, very earthy, somewhat vegetal. It was like a strong espresso, starting out bitter, then mellowing. Definitely for those wanting to maximize the health benefits of their chocolate intake — all chocolate, nothing else.

There’s also candied ginger balls covered in the 100%, which was an interesting combination: The strong 100% offset the sweet in the ginger, while the sugar in the ginger offset the bitter in the 100%. Note: The ginger is the only ingredient in the entire line that isn’t local. (It’s from Thailand.) 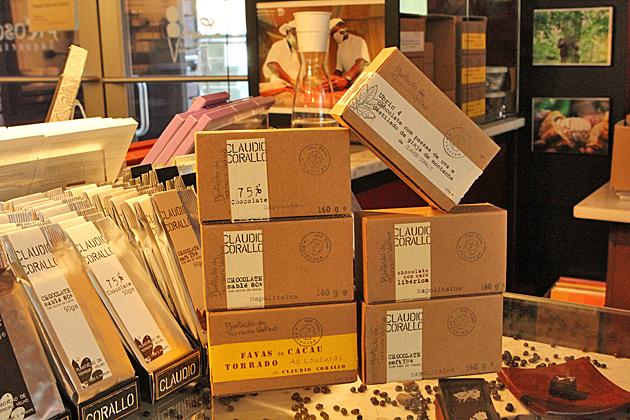 There’s something for everybody in the Claudio Corallo line, even if you think you don’t like dark chocolate.

They even offer plain roasted cocoa beans — if you want to check your dexterity in picking the cocoa germ out of the nibs. You can eat the nibs plain, they are tasty, or get creative and add them to other foods.

I found the chocolates that had added sugar much more to my liking. The 80/20 Sablé is interesting. It’s 100% chocolate with crystalized sugar added, so it has a sandy texture with some bites tasting sweeter (more sugar) and others tasting more earthy (more 100%). It’s like a sugar version of sea salt chocolates.

The rest of the chocolates have the sugar dissolved into them, so they had a lighter texture and flavor. But all of Claudio Corallo chocolate leans more to the savory side than the fruity side more typical of American chocolate.

Except maybe the Ubric, which is red mescat grapes soaked in alcohol, mixed into a 70% chocolate slab. Claudio makes the alcohol from different fruits around the islands – sometimes from red mountain cherries (which we tried), sometimes from the cacao pulp they harvest when separating the beans from the pods. (Nothing goes to waste.) It’s a distillate, not a liqueur (no sugar or other additives) or a wine (wines aren’t distilled).

This chocolate does taste fruity with the alcohol taste following, but the chocolate lingers. (It was a big hit as the dessert after a dinner party, winning over a milk-chocolate lover and causing another guest to declare, “Tonight, I have tasted greatness!”)

Other chocolates from the line incorporate candied orange peel, salt & pepper, and nibs — all grown on the islands of Saõ Tomé & Principe.

Claudio Corallo seems like a lot of other artisan chocolatiers — artist, idealist, mad scientist — but he ups the ante with growing his own supplies. And he has a worthwhile product at the end of it all, so it’s not all for show. You can actually appreciate what he’s doing when you eat his chocolate. It’s another great addition to our growing local chocolate scene.

UPDATE: While their Berkeley location has closed, you can check out this unique chocolate yourself at Alegio Chocolaté in Palo Alto.