in 2014, we were impressed by the beauty of the place and the pieces. And when we tried their truffles, we made Kollar one of our recommended chocolatiers.

Since then, they have continued to impress not only us, but the world. For example, in 2015, Kollar’s founder and head chocolatier, Chris Kollar, was named one of Dessert Professional Magazine’s Top Ten Chocolatiers in North America. And in January 2020, he was named a Chopped Champion on Food Network’s Chopped (season 44, episode 8).

We visited Kollar Chocolates again in February 2020 for our Wine Country Chocolateering: Napa Edition tour. This time, while all the original elegance was still there, we noticed more of the humor that infuses the place.

For instance, the cute molded owl chocolates we saw last time and thought were just decorations, we discovered are actually maracas. The large, hollow, egg-shaped birds are filled with little chocolate beads so they rattle when you shake them, just like real maracas.

Then there are the “Anti-Dental Kits” — 2 molded chocolate toothbrushes and a tube of chocolate “toothpaste” (ganache) — which like the owls are probably too cute to eat. 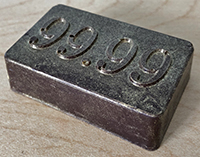 I did not have that problem with the gold luster-dusted PB&J bars however. Peanut butter and chocolate are 2 of my top 3 fav foods, so even though they looked like little bars of gold, I still had to try them.

The raspberry flavor hits first, a really good, distinctly raspberry taste. The peanut butter flavor comes after, and my only wish is that it would be dominant — like the way I make my PB&J sandwiches. I think Chris Kollar must be a jelly-forward PB&J connoisseur. 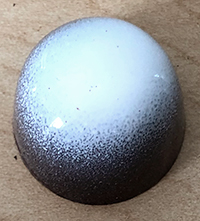 Kollar Coconut, the sample of the day

Finally in the fun range, they still make Kollar Krack, a dark chocolate bark with pop rocks that we enjoyed last time, and a strawberry flavored white chocolate version.

And the staff was great, witty, knowledgeable, and helpful. Plus they give out free samples. The day we went, they gave us each a whole truffle. The day’s flavor was Coconut, which was a white chocolate ganache full of coconut bits in a thin dark shell. It was very coconutty, and reminded me of Mounds bars, but with better chocolate. 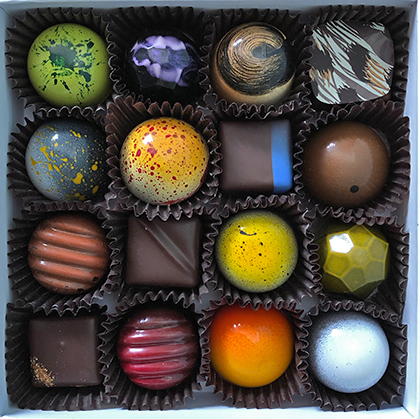 The case of truffles is just as stunning as before, and we got a box of truffles, some repeats, some new from the last visit. They were all delicious, but the thing we remarked on repeatedly was that they had consistently the thinnest shells we have ever seen that also managed to be surprisingly sturdy.

We have a new CBTB chocolateer since we first decided to put Kollar Chocolates on our Recommended list, so we took this opportunity to introduce chocoloco to Kollar’s truffles to see if she agreed with our recommendation. When she first saw the truffles in the box, she said they were beautiful with an outer space feel, and in particular she found the Earl Grey piece very pretty. 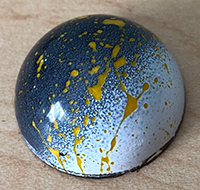 The dark chocolate piece had a firm ganache and smelled like bergamot, just like Earl Grey tea. As for the taste, we were all impressed with its immediate but not overpowering bergamot citrus flavor.  We thought it nicely balanced with the dark chocolate. 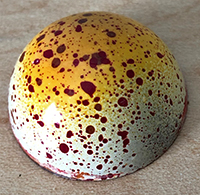 The truffle that Chris created in honor of winning the Chopped show this past January is part of the truffle case lineup now. It’s a white chocolate ganache flavored with miso paste and cayenne in a dark chocolate shell. Don’t be put off by the thought of that combo, it actually works very well. The miso makes the truffle a little savory; it doesn’t scream miso. And the cayenne starts mild then builds to heat, but it’s not a hot piece.

If you want heat, try the Espelette Chili. It gets hot very quickly and lingers, but overall it’s still a very chocolatey piece. I think they bumped up the heat in this one since the first time I tried it. 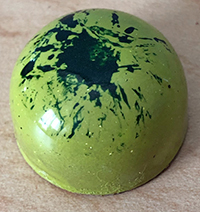 The Matcha Yuzu wants to hypnotize you

A new flavor to us was the Matcha Yuzu that looked like a green eyeball. The green tinted white ganache filling had a subtle matcha green tea flavor, but we detected no citrus flavor in the piece. We liked the piece anyway, especially its buttery texture. 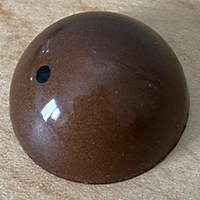 The Dang Hazy is cute from its name to its one little dark dot decorating an otherwise clean, shiny brown dome. The dot looks like a mistake at first, but its perfect roundness and the fact that all the pieces in the case had the same dot refutes that idea. It is a sweeter piece than the others with a very crunchy milk chocolate ganache that tastes of hazelnut first, then coconut.

The rest of the pieces were ones we’d had before, but they are still just as good as the first time. The alcohol based ones were just as enjoyable as before — subtle, not boozy, where the wine/liqueur is there to enhance the chocolate instead of dominate. The Red Wine flavored with local Zinfandel was the most subtle; the Coffee Kahlua was the most boozy with more of a Kahlua taste than a coffee taste; and the Orange Grand Mariner was a light orange chocolate. 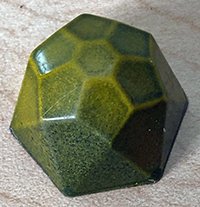 The award winning Fennel Pollen makes a nice match of the distinctly vegetal licorice taste of fennel and chocolate (dark shell & milk ganache). And this time, we saw its geometric shape, not just like a jewel but also reminiscent of honeycomb, which was a belated aha moment for us original CBTB-ers.

The other faceted piece, Lavender, looks more like a jewel with its rich purple color. Chocoloco is our resident floral chocolate lover, but we agree with her that this is a light, yet distinctly lavender dark chocolate that gets it right: It doesn’t taste soapy. 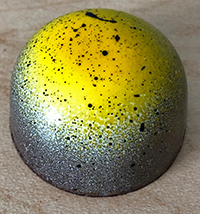 The 2 nut butter pieces we had, Peanut Butter and Sunflower Seed Praline, were great, both well made and tasting as advertised. The Peanut Butter had the same crunchy ganache as the PB&J bar and smelled like peanut butter. But this time, I liked the Sunflower Seed Praline better because it had little crunchy salt bits in it — like salted sunflower seeds. We thought it was a clever touch. 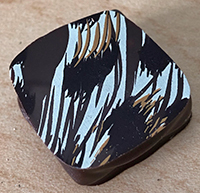 Bird or beast? We couldn’t decide

The other salted piece we had, the Salted Caramel, has an attractive transfer pattern on brush strokes that chocoloco thought looked like something between fur and feathers. It’s a soft caramel, but it was too salty at first. It did become buttery toward end when the salt went away.

The one fruit piece in our box, the Passion Fruit, had a pronounced passion fruit flavor that built up as the piece melted and then lingered. I was impressed because a lot of chocolatiers use white chocolate for fruit-based truffles like this, but Kollar uses milk chocolate and it was still very satisfyingly passion fruit. 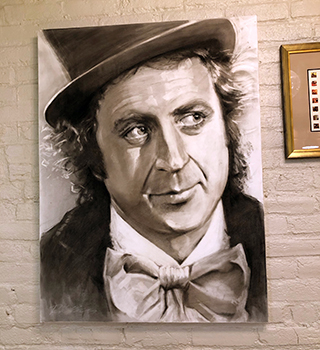 Willy Wonka watches as you leave

After all these interesting flavors, we also had their 72% Dark Chocolate. It was nice with an initial coffee overtone, but then settled into simply chocolatey.

We were glad to see that Kollar Chocolates is still creating beautiful and memorable chocolate. We also were happy to discover this other fun side. We look forward to what they will have to offer next.

As we were leaving, we noticed the Willy Wonka portrait on the wall next to the door. The staff told us Willie Wonka is an inspiration to Chris Kollar. I can believe it, there is definitely a whimsical side to Kollar Chocolates.

is located in Yountvillle at V Marketplace. In addition to their line of chocolates, they sell espresso drinks and gelato at the shop. You can also buy their chocolates online, and we found them at the Store at CIA Copia in Napa.