Cacao is vegan — it’s a seed — but once you add milk, butter, or other animal by-products to make milk chocolate or caramels, it’s not vegan anymore. So over the past 10 years as veganism has become mainstream, chocolatiers have been developing vegan alternatives that can be just as tasty as traditional products that include dairy. Can be, but not necessarily will be.

The 2020 Best Vegan Chocolate Awards by TasteTV had a good range of vegan entries, from ones that were indistinguishable from traditional chocolates to OK-but-different to back-to-the-drawing-board. As a judge, I will highlight the best — and include some notable-for-different-reasons entries. 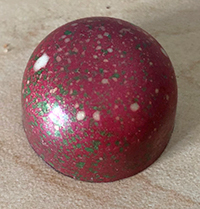 Competition veteran, Tandem Chocolates, UT, makes beautiful bonbons; and their Vegan entry was no exception. The Coco-Passion was a pretty, deep red, high dome, splashed with green & pink spots. It was well made with a thin shell of dark chocolate encasing layers of fruit purées: passion fruit, coconut, and lime.

It was super flavorful with an initial strong hit of passion fruit, followed by coconut, with a slight lime zest taste at end. The dark chocolate held its own as an undertone that lasted along with the coconut and passion fruit flavors. 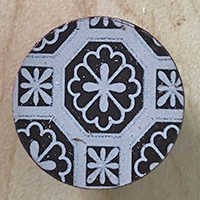 The Coco-Passion had a surprise underneath

Often I don’t taste enough passion fruit in bonbons labeled passion fruit, but not this time. In addition to the fruit purée, the ingredients list included “Passion Fruit Inspiration,” which it explained was dried passion fruit juice. I think that double-dose of passion fruit is what made this such a good passion fruit piece. But it was the combination with distinct coconut and lime flavors that made it my favorite in the competition.

It did well in the competition, winning Silver for Best Ingredient Combination, Best Taste, and Best Flavor; Bronze for Most Unique and Top Vegan Chocolate; and an Honorable Mention for Best Texture. It rated 5 stars.

A new competitor this time, EHChocolatier, Cambridge, MA, submitted a collection of small vegan bonbons that was very good too. Their Meltaway Collection used dark chocolate and organic coconut oil as the base for 8 different flavored pieces covering fruits, nuts, and beverages. 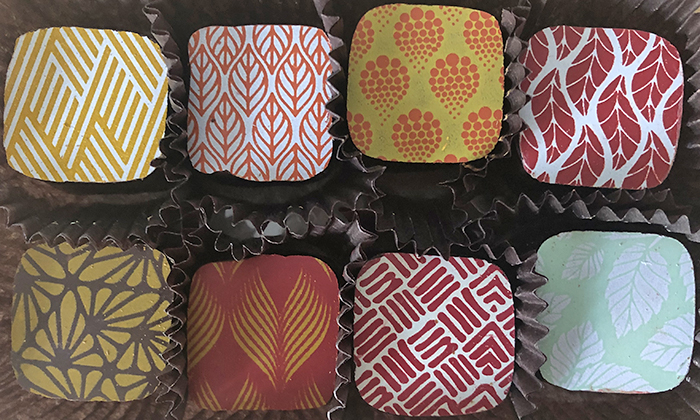 The pieces are dark chocolate shells with flavored fillings. I thought they might be white chocolate ganaches inside, but they had a firmer texture than a ganache. Maybe it’s the coconut oil mixed with cocoa butter that makes the interiors solid instead of soft. They had a very smooth mouthfeel as they melted. The shells were thin so the interior flavors took center stage, and even though there is coconut oil in them, I didn’t taste it at all.

The fruit flavors were great: They smelled like the fruit listed and immediately tasted like what they were. As they melted, the chocolate became more distinct, then lingered with the fruit flavor it was paired with.

And the flavors chosen were good: passion fruit, yuzu, and strawberry. I love passion fruit, and this piece did not disappoint. They added enough fruit to the filling so that even if I didn’t know beforehand what the piece was supposed to be, I would have known as soon as I tried it. Likewise, the Yuzu piece, while it started out just as a general citrus flavor became distinctly yuzu as it melted. And the Strawberry with its deep pink interior was immediately and lastingly strawberry.

I was excited to see Peanut Butter as one of the flavors because it’s one of my top 3 foods, but the dark filling was too mild for me. It smelled like peanuts, but wasn’t as flavorful as the fruit pieces. The peanut butter did rally as the aftertaste. Hazelnut was better with tiny crunchy caramelized bits of nuts in the filling, which was a fun texture and gave a more pronounced nut flavor than the peanut butter.

Coffee was subtle at first, making the piece extra chocolatey, but as it melted the coffee flavor took over. Really good. The Chocolate piece highlighted how nice their couverture is. Another really good piece.

The Matcha was the only disappointment. It was too bitter with the dark chocolate. I actually prefer white chocolate when matcha is the added flavor because matcha can be pretty bitter on its own, and white chocolate’s one strength is that it’s never bitter. 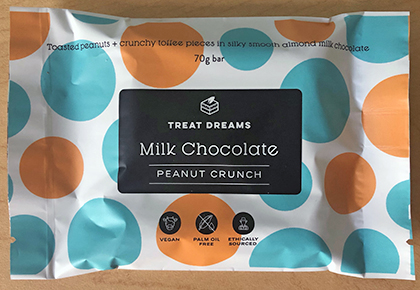 You can buy EHChocolatier’s confections online or at their store in Cambridge, MA.

A stronger peanut & chocolate combo came from another new competitor, Treat Dreams, Sydney, AU, a 100% vegan chocolatier. Their packaging was very appealing with a cute bubble design on the wrapper and a bar mold of exaggerated big pillow squares, echoing the bubbles on the wrapper. 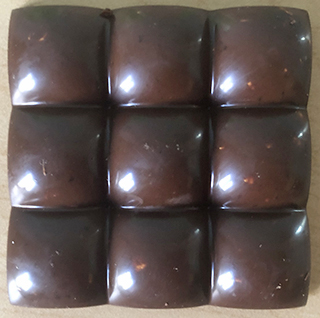 Their Milk Chocolate Peanut Crunch was shiny with a mild snap. It had lots of chopped toasted peanuts and crunchy toffee pieces in a vegan milk chocolate made with almond milk. This was another vegan chocolate that I almost couldn’t tell was vegan, but that’s harder to cover up when doing a “milk chocolate” without dairy, as opposed to a dark chocolate that usually doesn’t contain dairy anyway.

Still I thought this was a good bar with an appealing texture and flavor, and the combo of peanuts and chocolate lingering afterwards.

Return competitor, Honduras Chocolate Company, Denver, CO, makes superior chocolate bars using only 2 ingredients: cacao and cane sugar. Their selling point is that their chocolate is never bitter, and while that might not be not 100% accurate, it’s pretty close. 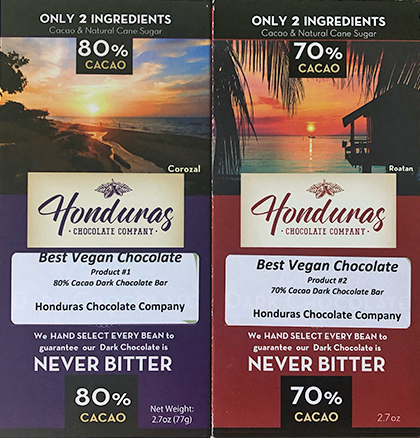 Honduras Chocolate Company wrappers have a lot to say

They submitted 2 bars for consideration. An 80% and a 70%. They both had a good snap and a smooth texture with a slight graininess. The 80% Cacao bar, the Corozal, which I assume is named for the area in Honduras where the cacao came from, was a savory chocolate, not very bitter, with nutty overtones. It was a simple but tasty chocolate. And impressive, when you consider there are only 2 ingredients; their quality control must be top notch.

It did very well in the competition winning Gold for Best Dark Chocolate and Top Vegan Chocolate; and an Honorable Mention for Best Taste. It rated 4.5 stars.

The 70% Cacao bar, the Routan, had a different flavor, a little smoky, and nutty, and fruitier than the 80%. I could tell the beans came from a different region. It wasn’t bitter and not too sweet.

It did even better in the competition than the 80% with Gold for Best Dark Chocolate and Top Vegan Chocolate; Bronze for Best Texture; and an Honorable Mention for Best Taste. It rated 4.5 stars.

You can buy Honduras Chocolate Company bars online. Right now — and I don’t know for how long — they are having a big sale with their 2.7 oz. bars for $4 each — with a free 8 oz. bag of cocoa powder included. 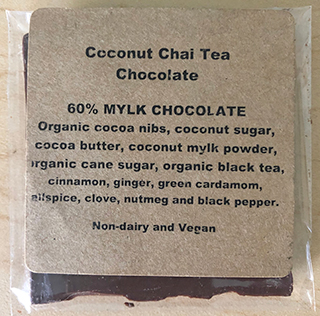 Veteran competitor and still mystery chocolatier, For Pete’s Sake, from parts unknown and zero Internet presence, had a tasty entry, and I’m sorry there is no way for you to try it yourself.

Their Coconut Chai Tea Chocolate, described as a 60% Mylk Chocolate, used coconut mylk powder, black tea, and a slew of spices to make a bar that smelled and tasted like chai in chocolate. It was a good bar, with pops of cinnamon, cardamom, clove, allspice, and nutmeg, and a little bite from the ginger and black pepper.

The Coconut Chai Tea Chocolate received Silver for Best Milk Chocolate; Bronze for Top Vegan Chocolate; and an Honorable Mention for Most Unique. It rated 4 stars.

I wish I could tell you where to find For Pete’s Sake chocolate, but there is no contact info on the packaging — they didn’t even include their name on the label this time, but I recognized the bar mold and label style from previous competitions — and Google searches come up blank. 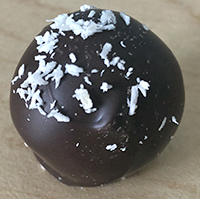 The last notable-in-a-good-way entry that I want to point out was from competition veteran, Seleušs Chocolates, Seattle, WA. Their Porter di Coco 75% embraced the coconut substituting for dairy and was all about the dark chocolate and coconut combo, starting from the dark chocolate shell sprinkled with coconut flakes.

It had a smooth, light textured ganache that was a little bitter, but had a good chocolate flavor. Coconut came after and didn’t last; it was mainly a chocolate truffle.

The Porter di Coco 75% did well, receiving Silver for Best Texture, Best Dark Chocolate, and Top Vegan Chocolate; Bronze for Best Taste; and an Honorable Mention for Most Unique. It rated 4.5 stars.

Seleušs Chocolates are not currently available online, and their stores are closed due to COVID. Check their website for updates.

There were 3 SFBA entrants in the competition, but none of them were my favs this time.

The Oakland Chocolate Company had a 70% Ginger Coconut Grapefruit Bar which was a little smoky and not too sweet, but the inclusions were dry, so I didn’t taste the coconut or grapefruit, and the ginger was not very strong. The coconut bits added a chewy texture, which was nice, but the bar was too bitter for me.

The Oakland Chocolate Company are available online, at the Old Oakland Farmers Market, the Grand Lake Farmers Market, and in some local shops. You can also arrange pickup at their kitchen. Visit their website or Facebook page for details. 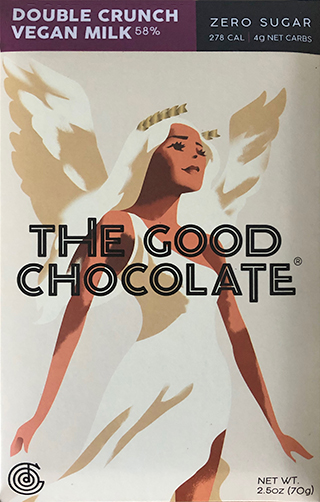 As I said in the bar competition article, the Himalayan Salt bar is a good choice if you are avoiding sugar and don’t mind the cooling sensation from natural sugar substitutes. It rated 3 stars in the competition.

The Double Crunch Vegan Milk was very unpleasant to me. The flavor reminded me a bit of vomit, and the bar had a hard crunch like biting rocks or bones. One of the ingredients listed was aquafaba, which cacaopod told me is the juice strained from canned beans. I appreciate inventiveness, but I think they went too far this time. Still, it did ok in the competition with a Bronze for Best Milk Chocolate. It rated 3 stars.

The Good Chocolate is available online in their own store and on Amazon. They are also available at some grocery stores in SFBA. Check their website for locations.

Endorfin Foods, Berkeley, who make minimally processed chocolate, had 3 entries in the competition. I’ve wanted to try their Golden Mylk bar for a while because it sounded so unusual. Its ingredients include turmeric, cardamom, black lava salt, black pepper, and caramelized coconut milk. It’s 40% cacao all from cocoa butter.

The bar was a dark gold color and so hard, it shattered when I broke a piece off. Unusual for almost raw chocolate and for white chocolate. It smelled strongly of coconut and turmeric, and tasted the same with a buttery overtone. It was a little salty too. Because there were no cacao solids, it came off as an unusual dessert to me, but not chocolate at all.

It did very well in the competition though, receiving Gold for Most Unique; Silver for Best Milk Chocolate; and Honorable Mentions for Best Taste and Best Flavored Chocolate. It rated 4 stars.

The other 2 entries, Coconut Cream, a 54% dark chocolate flavored with caramelized coconut milk and vanilla, and Dark & Salty, an 84% extra dark chocolate that had nibs and pink salt scattered on the back, were both super hard, a little grainy, and bitter.

The graininess is to be expected with minimally processed chocolate, but I was surprised that a 54% chocolate was bitter. Even so, the Coconut Cream bar received a Bronze for Best Flavored Chocolate and an Honorable Mention for Best Milk Chocolate. It rated 4 stars.

Endorfin products are available online, and their bars are sold in stores across the country.

This site uses Akismet to reduce spam. Learn how your comment data is processed.