In May 2019, Cacaopod was a judge for the annual TasteTV White Chocolate Awards competition. If you’ve read anything on this blog by now you probably already know how I feel about white chocolate, but since we are married and take our vows seriously, for better or for worse, I tried the entries too.

There were 24 entries this year. And I can’t believe I am writing this, but I loved 11 of them and liked 6. The rest shall remain unnamed and hopefully forgotten ASAP.

Charlotte Truffles is the newest local (Santa Clara) chocolatier in this list. We first tried one of her truffles in the 2018 Truffle Artistry Awards competition, and loved the piece for its beauty and balance. We were similarly impressed with her entry in this competition. 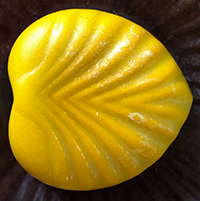 Dreamy Nangka was another pretty piece by the chocolatier, with a unique molded leaf design and a bright orangey yellow color.  Inside, it had 2 layers and a weird texture — like sugar suspended inside jelly. The flavor was also unusual; the best description I could make was weak pineapple. I found out afterwards that nangka is another word for jackfruit, which has been described as tasting like a cross between banana and pineapple, and I think that’s pretty accurate.

Although I’ve only tried 2 pieces by Charlotte Truffles, I think very highly of her artistry and creativity. Both pieces were beautiful and well made; and the flavors/textures were unusual, but tasty. I look forward to seeing how her business develops.

Dreamy Nangka received a 3.5 out of a possible 5-star rating. 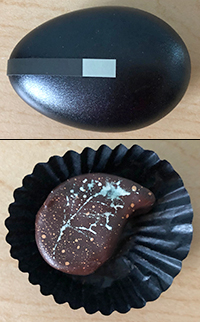 And speaking of unusual chocolates, our local queen of experimental chocolates, flying noir, also had an entry which I loved. It started with the packaging, which was a neat egg-shaped package, and nestled inside was a single leaf-shaped truffle, hand decorated with splashes and flecks of natural color.

It was not a sweet piece, which is what I always fear with white chocolate, but I wouldn’t call it savory. The white ganache interior was green colored from the matcha, which was one of the stronger flavors in the mix. It was a little bright and citrusy from the yuzu, but overall the flavors were not distinct from each other. Instead, they blended into a tasty experience.

Matzu received Silver for Best Taste, Best Texture, and Most Unique; Bronze for Best Ingredient Combination; and a 4.0 Star Rating. 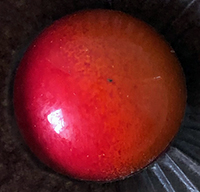 The last local entry was Michael’s Chocolates’ Pomegranate Orange. We first tried this piece at last year’s Fall Chocolate Salon and loved it, so we were excited to see it in the competition.

As with all Michael’s truffles, the piece is a treat on all levels, starting with the shiny orange/red exterior. The color entirely coats the perfectly thin dark chocolate shell, which in turn houses the smooth orange pomegranate ganache.

The first taste seems like it will be a typically crowd-pleasing orange chocolate, but a tart berry-like flavor emerges to add a little tang to the innocuous orange. It’s a subtly more adult chocolate orange.

While I was pleased with the local entrants and surprised that there were other entries I liked just as much, I am really excited about the white chocolate bar from Zurich-based chocolate maker Dieter Meier’s Oro de Cacao line. 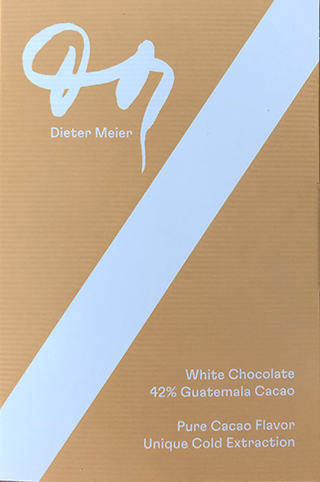 Unfortunately, Oro de Cacao bars by Dieter Meier are not available outside Switzerland and Leichtenstein

I tried a couple of his dark bars and a milk chocolate bar in another competition and was surprised to find raw chocolate I liked. Usually, raw chocolate is too gritty and not as flavorful as traditionally roasted and tempered chocolate for me. At Oro de Cacao, they have a “patented full-flavor cold extraction” process, which they claim allows them to create raw chocolate that preserves the complex natural aromas of the cacao, eliminates the need for vanilla, reduces the amount of added sugar required, and is not bitter.

While the bars in that competition were gritty/powdery as expected for raw chocolate, they tasted pretty good. Each bar was complex: the milk started nutty and ended with a chocolate ice cream aftertaste; the 75% was cocoa upfront, then had notes of banana candy, and ended with a generally vegetal, but fruity taste; the 80% tasted very fermented with nutty overtones.

With raw white chocolate however, there is no grittiness because there are no ground-up bean bits. Its chocolate comes from cocoa butter only. Traditional cocoa butter is pretty tasteless, which is the reason people add so much sugar, vanilla, and other flavorings to it. But with Oro de Cacao’s cold extraction, the cocoa butter actually retains its cocoa flavor.

I liked it because it was more chocolatey tasting than other white chocolate. You would never mistake it for a dark or milk chocolate, it’s more subtle. But it earns the name “chocolate.”

Chip in a Bottle’s lovely Strawberry Sumac with Fennel Pollen

I’m not even halfway through with this batch of white chocolate: There were 7 more entries that I loved and 6 that I liked.

Chip in a Bottle, a Connecticut based chocolatier, had 3 entries in the competition. I loved 2 of them and shall remain silent about the 3rd.

Strawberry Sumac with Fennel Pollen was a pretty half-white/half-pink heart-shaped piece created by splattering the mold with red and white edible coloring. The shell was a good thinness, with a gooey inside, which tasted lightly of strawberry at first, but got more intensely strawberry, Kudos for it being not too sweet.

Chip in a Bottle’s Bitters with Sweet Citrus Reduction didn’t look appetizing, but was tasty

Chip in a Bottle’s Strawberry Sumac with Fennel Pollen received Gold for Most Unique, Silver for Best Ingredient Combination, and a 3.5 Star Rating.

The name of Chip in a Bottle’s Bitters with Sweet Citrus Reduction gave me pause; as did the unattractive color combo of yellow/brown/red on its sea shell/snail shell mold. But it was a cool piece with a jellied core — maybe that’s the reduction? —and a taste like old-fashioned Reeds cinnamon candy. No citrus taste that I could discern, but it was a unique piece.

Chip in a Bottle’s Bitters with Sweet Citrus Reduction received Bronze for Best Ingredient Combination and a 3.0 Star Rating.

Coco Gusto Chocolates  makes hand painted artisan chocolates in Denver, CO. Their single entry in the competition, their White Raspberry Bonbon, was a very pretty twisted-bar shape molded chocolate. While the top attracts all the attention with its blue and orange sprays of color, the bottom was surprisingly pink. The ganache inside was a good white chocolate, not too sweet, with a light raspberry flavor that ended a little buttery.

Panache Chocolatier’s Cascara was a new taste for me

Panache Chocolatier, Kansas City, MO, entered 3 of their big, round truffles in this competition. One I loved, 2 I liked. The one I loved, Cascara, was a white orb sprinkled with cocoa powder. Simple, but attractive. It had a good thin shell, and the smooth ganache was slightly fruity with caramel overtones. It was sweet, but not too sweet.

I did not know what cascara was, so I looked it up. Turns out it’s the skin and pulp of the fruit around a coffee bean. The dried pieces are steeped in water, so it’s kind of like coffee or tea, but this piece didn’t taste like either one to me. It was its own, hard-to-describe flavor. 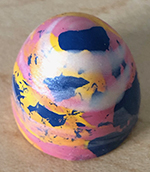 Shokolate Haven is a Minneapolis, MN chocolatier. Their single entry in the competition, the Pink Coconut in White Chocolate truffle, looked like half a pink Easter egg, splashed and swirled with every dye color they had on hand. It was a fun piece, with a liquidy raspberry flavored inside with some coconut bits mixed in 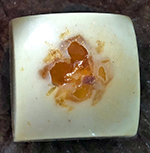 Perhaps in reference to its namesake, Tandem Chocolates, out of Park City, UT, submitted 2 truffles into the competition. I loved one, liked the other.

The Mocha Brûlée was a convex square molded chocolate with a transfer design on bottom, but it was the decoration on top that was truly eye catching. It was the hardened caramelized sugar like the top of a crème brûlée dessert. And just like a crunchy brûlée top, it cracked a bit as I chewed it — so cool! Even without the crunchy top the piece itself was tasty, with a light mocha coffee flavor, and not too sweet. But the topping put it over the top for me. 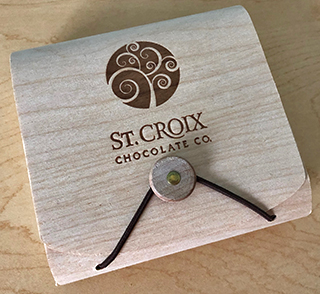 My last 2-thumbs-up selection was actually 4 pieces by Minnesota’s St. Croix Chocolate Company. I was intrigued by the beautiful wooden box with their logo stamped on it, which when opened revealed another box with 4 pretty bonbons inside.

Everything about this entry looked so great, but there was no menu! Would we be able to unravel the mystery of this assortment? 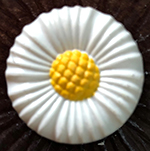 The first piece we tried was a very detailed molded white daisy with a bright yellow flower head. It was almost too cute to eat, but I’m glad I did. Inside the thin shell was a super soft, yellow ganache that was very lemony, like lemon curd. I found out afterwards that this piece is called Lively Lemon, and I think that’s accurate. 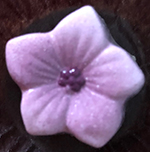 The next piece looked like a purple plumeria flower. It had a yellow ganache inside the purple shell and tasted like Passion Fruit. I thought it was clever to use the colors of real passion fruit for the piece. And beyond that, it was strongly passion fruit flavored, so delicious, I loved it. 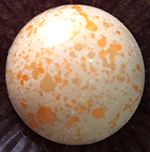 The 3rd piece, a light orange speckled dome, was the only piece we got wrong. It had a layered interior, with pâte de fruit on top of white chocolate ganache.

We couldn’t tell what fruit flavor it was. We thought it might be guava or another tropical fruit to go with the others, but we found out later that it was Apricot. I guess apricot is too light a flavor for me to guess. I couldn’t discern it in one of the pieces I liked later in the competition either. 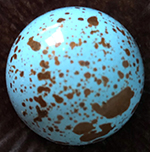 The final piece was a gorgeous robin’s egg blue dome speckled with brown. I don’t think this was a white chocolate piece. It seemed like a dark chocolate shell with coffee flavored milk chocolate ganache inside, but I didn’t care. Chocolate Malt looked and tasted great.

While this box counted as one entry, I think it should have gotten extra credit for each piece being so impressive. As it was, the St. Croix Chocolate Company Black and White bon bon box received Gold for Best Taste and Best Texture, Silver for Best Ingredient Combination, ranked #2 Best White Chocolate, and received a 4.5 Star Rating.

While I am still amazed I loved as many entries as I did, I didn’t love everything. However, beyond the ones mentioned above, there were a few more entries I liked:

You can view the complete list of winners on TasteTV’s site.