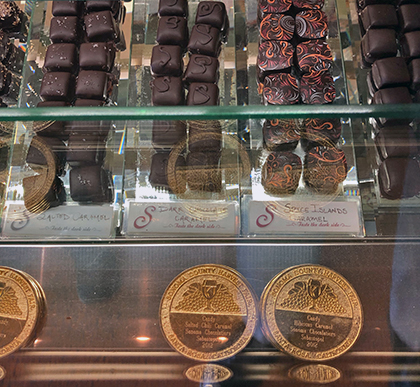 We don’t usually visit one chocolatier 2x in a year, but we made an exception for Sonoma Chocolatiers for 2 reasons: 1, we happened to be in the area twice within a few months; and 2, they have a constantly changing variety of truffles and caramels.

We serendipitously visited in May, and discovered that they have over 130 flavors but not all at the same time. So since we were doing a wine country chocolateering adventure in July, we wanted to re-visit Sonoma Chocolatiers to see what new flavors they had to offer. They did not disappoint.

On this trip they had approximately 25 flavors to choose from, about the same as they had in the case last time. And as before, all the chocolates were dark chocolates because that is all Sonoma Chocolatiers makes.

Some flavors were the same, such as PB & Heaven, Salted Caramel, Devout, Cinnamon Rose Caramel, Brown Sugar Rum Caramel, Hibiscus Caramel, Indian Coconut, Curry, Lavender Caramel, and vegan choices Balsamic Olive Oil and Lemon Olive Oil. But that meant over half were new to us. 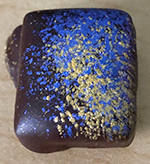 Such as the California Coastal piece, which the chocolatier said contained herbs from coast, but that was as much as she would describe because the actual ingredient list was “secret.” Intrigued, we had to get one to try. But even after trying it, I still don’t know what’s in it. It started fruity, then got weird, and ended a little acerbic. If I get a chance, I’ll try it again to better describe the experience.

We also got to meet Sonoma Chocolatiers founding chocolatiers, David & Susan Gambill, on this trip, and had a nice chat and got recommendations while filling a 16-piece box of mostly new pieces. They started Sonoma Chocolatiers in 2008, but David already had a couple of decades of making chocolates for fun before that, and it shows in the conversation. I don’t think you can stump him with any chocolate question you might have.

Healthy chocolate is a big part of the Sonoma Chocolatiers’ mission, so in addition to good-for-your-heart dark chocolate, they also offer a few dairy free, vegan truffles made with olive oil.  We got 2 of them: The Lemon Olive Oil had a good lemon scent and tasted lemony. The ganache was very smooth with a slightly powdery finish. It didn’t have that slippery feeling like other olive oil chocolates I’ve had. Similarly, there is no olive oil taste. I guess the dark chocolate masks it, but with most olive oil chocolate I have had, the slippery texture the oil adds is the appeal, not the taste.

The Orange Olive Oil piece had a lighter color ganache (maybe so as not to overpower the orange flavor?). Like the Lemon Olive Oil, it tasted distinctly of its citrus flavor, and was very smooth but not olive oil slippery. These are nice pieces, especially if you can’t eat dairy for health or other reasons. 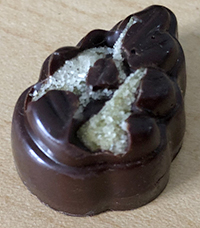 I loved both the look and taste of SC’s Mojito

Three pieces in this round I loved were the Mojito, the Tequila Lime, and Spice Islands Caramel. The Mojito looked like my fav from last time, the Earl Grey Orange Absinthe, with its crystalized lime peel peeking out of cracks of the same leaf-shaped shell. It was assertively mojito: It smelled & tasted strongly of lime first, and was crunchy with lime peel. Like a mojito, the combo of lime and mint seemed a little strange, but the flavors balanced, and it was refreshing. 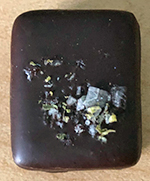 The Tequila Lime shell seemed positively subdued, but everything else about it was supremely confident

The Tequila Lime was way more subdued looking — just a simple square with cracked salt sprinkled over it — but it was just as flavorful. It smelled boozy, and the first taste was salt, but that faded quickly, replaced by the light lime playing against the chocolate. The lime/chocolate combo lingered afterwards.

The Spice Islands Caramel had a taste somewhere between pumpkin pie spice and apple pie spice. The top note was very cinnamony, and the caramel was grainy, which seemed evocative of pie filling.

Another grainy caramel I liked was the Ginger Cardamom Caramel. It was a dark, soft caramel, with hot ginger the first taste, tempered later by cardamom.

The Spicy Almond Caramel was not exactly grainy; it had more of a finely chopped almonds texture. In fact, I didn’t really taste almond so much as felt it in this piece. This piece was more about the dark chocolate with a little heat that came up slowly and lingered.

We tried a couple of floral pieces this time too. The Lavender Caramel was a smooth caramel with lavender buds decorating the top of the piece. It had a strong lavender flavor from start to finish, which danced on the edge of soapiness, but ultimately was balanced by the dark chocolate shell and caramel.

The other floral we tried, Jasmine Green Tea, was only mildly floral at the end and as more of an aftertaste. I’ve found this to be true a lot of times with jasmine tea flavored chocolate. I think the dark chocolate overpowered the light floral tea flavor. 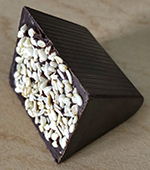 With so many potential flavors, there had to be one I did not like at all. That was the Mint Honey Sesame Seed Caramel. I can’t describe it beyond very weird and peppermint heavy. One of my fellow tasters described it as “the ghost of Christmas past.” 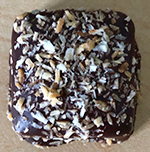 There were a few more fun pieces for me. Two were coconut based. The Toasted Coconut had a shaggy coating of toasted coconut bits, plus a chewy ganache full of more coconut, but the coconut texture and flavor didn’t overwhelm the chocolate. The piece had a good balance, and was very chocolatey and coconutty.

The Almond Coconut had a dark ganache flavored with coconut and some liqueur I couldn’t place, plus a whole almond on top. It was like an adult version of Almond Joy. It wasn’t labeled vegan, but seems like they could make it vegan since a lot of chocolatiers are using coconut products in their confections to substitute for dairy. 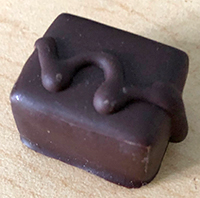 The other fun piece for me was the Drambuie, maybe because I’ve never had Drambuie before. It had a nice boozy smell, and was sweet and savory, with maybe a touch of smoke.

While you never know what selection will be available, which is part of the charm, Sonoma Chocolatiers’ chocolates are available at their Sebastopol store and online. They also have some of their greatest hits, such as the PB & Heaven, salted caramels, and lavender caramels, at Oliver’s Market, a Sonoma County supermarket chain.