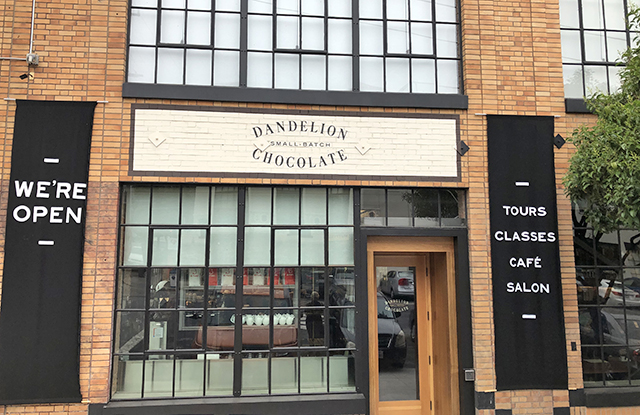 When I first heard of Dandelion Chocolate’s Bloom, it was described as their version of Paris’s Angelina, the hot chocolate heaven I first experienced in 2009 right before we launched CBTB. In 2018, I got to visit the Angelina tea room at Versailles, but this year’s budget would not stretch so far, so I looked forward to Bloom with great anticipation.

Cacaopod & I snagged a reservation for afternoon tea, May 14, the first day they opened to the public; and while it is not Angela, it is a worthy splurge in its own right. Reservations are still fairly easy to get, and it’s convenient to public transit (3-1/2 long blocks from 16th St. BART, or take the 22/33/55 to the stop one block from Bloom).

If you would like to experience a chocolate tasting salon, and Paris is not on your calendar this year, go local! Book a table at Bloom.

The name refers to both the company name (weeds are flowers too) and the haze that develops on chocolate when it had been subjected to heat (the fat melts, then re-solidifies in streaks) or dampness (moisture draws the sugar out and leaves it as crystals on the surface). Blooms is not dangerous and doesn’t affect the taste. It just doesn’t look as pretty. 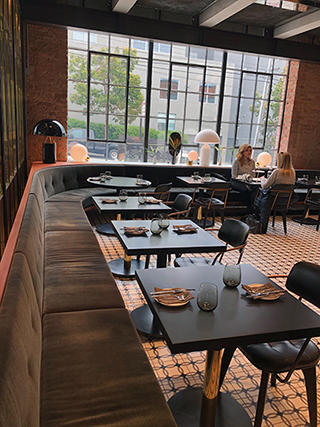 Feast for the eyes

The space, in the other hand, is a visual treat. It’s part of Dandelion’s huge, new factory building, which is a former printing and mattress factory remade into a chocolate factory, tea salon, and to-go café/shop. They retained the windows and exposed brick walls, and layered on a bunch of great surfaces.

It’s been years in the making: I first saw the large chocolate-themed murals at the corner of 16th & Harrison 3 years ago.

The entrance to Bloom is through the café/shop, which is eye-catching with its speckled concrete floor, brown leather banquettes, wood and brick walls, a slate-looking shaped-tile counter front trimmed and topped with wood, stainless steel shelving, and white ceramics.

This is mostly a to-go café. There are a few stools lining a window, and no outdoor seating. You can, however, get single drinks in Bloom if you want to sit down, and it’s not booked up.

The visual delight continues in Bloom itself. The salon is enclosed with beveled glass panels trimmed in gold. The exterior wall has large factory windows set in exposed brick. A long banquette wraps around 2 walls and is covered in a dark, velvety fabric. Chairs are leather and metal. Tables and accents are wood. A classic overlapping circle pattern decorates the tile floor. Looking up, the ceiling has patina-ed mirrors that give their reflections an interesting texture. (Even the gender-neutral bathrooms were pretty with shiny chocolate colored tiles on the walls and floors.) 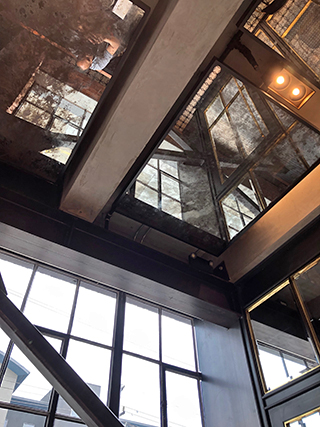 The salon is right next to the factory, which is visible through large floor to ceiling windows. Even though it’s visible, it’s quiet. The machines were switched on and off while we were there, and if we weren’t looking at them, we wouldn’t have known when they were on. Instead, we were treated to some soft Ella and other jazz on the sound system. It was easy to converse in the space without raising our voices.

I assume inside the factory is a little noisier. It’s an industrial space with metal floors, overhead conveyor belts, and much larger machinery than Dandelion started with. I don’t know if the equipment in the new factory would even fit in their open kitchen space on Valencia. This factory announces Dandelion has arrived as a serious manufacturer of chocolate in SF.

The far end of the factory includes bleacher seating, which looks kinda cool, but I don’t think you get to just hang out there. They offer tours and classes, and I think the bleachers are for orientation. So if your interests lie more in the making of than the eating of, you could book a tour for $15 a head. Or do both tasting and tour, and fill your morning or afternoon with chocolate. 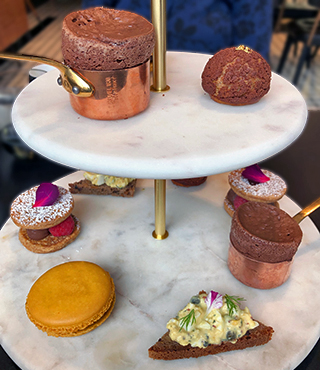 For our first trip to Bloom, we chose to come for the afternoon chocolate salon. There is also a morning breakfast/brunch option, which doesn’t seem quite as decadent.

While the Nibby Float on the Ice Cream menu sounded appealing — housemade root beer soda with cocoa nib ice cream — I’m not a huge ice cream fan, so 2 more courses of it (a take on SF’s own It’s It ice cream sandwich and a banana split variation that included banana bread, chocolate ice cream and cherry ganache) was too much for me. Instead, both Cacaopod and I opted for the Afternoon Chocolate Tea. 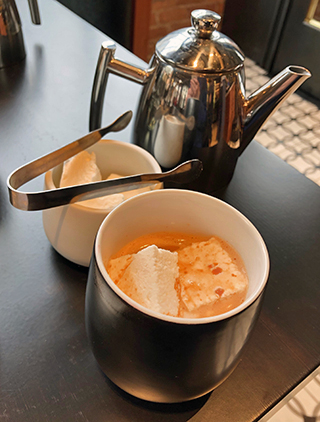 The pot might look tiny here, but I refilled my cup from it 2x

We both also opted for Mission Hot Chocolate for our pot of choice. It’s Dandelion’s take on Mexican hot chocolate, and starts very smooth and chocolaty, then gives a nice spicy burn (from cinnamon and peppers) and a slightly gritty but pleasant texture (from ground almonds) as you swallow. I think it’s the perfect warm-up drink for our usually cool SF days.

It’s served with a cup of housemade marshmallows, which a lot of people love, but this is the one way I wish Bloom was like Angelia. There, they serve the pots of chocolate with little cups of unsweetened whipped cream, which I prefer to the chewy sweeter marshmallows. The marshmallows do make for very Instagram-able drink shots, I will admit.

I have no complaints about the hot chocolate. It’s delicious, and there is plenty of it. The pot did not look very big, but I got 3 cups of hot chocolate out of it.

They also have their a la carte drinks: hot and cold chocolate (including a cacao fruit smoothie), coffee, mocha, and teas, which are also available to go from the café.

Everybody gets their own soufflé

The 5 courses were presented to us on a circular 2-tier marble stand. Each piece was beautiful and small enough that they didn’t look too challenging to finish the courses.

We started with the Chocolate Soufflé, which looked so cute, served in individual copper pots. The crispy crust gave way to a smooth, almost liquid inside. It was all very chocolatey and satisfying.

The next piece we tried, the Earl Grey Profiterole, looked like a little cream puff or a sweet mini-gougère. Which I guess is what it could be, as it was described as pâte a choux filled with chocolate Earl Grey cream. All that’s missing is the cheese.

Instead, it was a bite-sized chewy ball dusted with chocolate and gold dust. The chocolate cream inside had a light earl grey flavor that was almost too subtle, but it lingered.

I’m still thinking it might be good with some cheese in the mix.

We decided to try the savory piece next. The Egg Salad Tea Sandwich made with capers and dill served on housemate sourdough rye with cocoa nibs was a nice break from all the sweet. The egg salad had lots of dill, and tasted classically of the herb, capers, and pickles.

I especially liked the rye bread made with cocoa nibs. A nice savory use of chocolate. I wish they had another course or 2 of savory chocolate dishes to try. I get overloaded on sugar pretty easily.

The Citrus Macaroon was a typically chewy macaroon at first bite, but inside was more complicated. The first taste was citrusy from the Meyer lemon and cacao pulp over the almond flavor of the outer cookie. Then it changed to chocolate, and finally a refreshing fresh mint jam in the middle. It was kind of like a chocolate mojito macaroon. 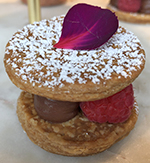 Pretty as a picture

The Almond Raspberry Napoleon bite was almost too pretty to eat with it neon-colored edible petal on top and whole raspberries and dollops of almond marzipan chocolate mousse sandwiched between 2 tiny wheels of puff pastry. I really liked the chocolate and fresh raspberry combo, but the pastry was a little salty and tasted burnt.

By this point, we had eaten every course, but still had a bit of hot chocolate to sit and linger over. We felt very satisfied with this enjoyable experience. 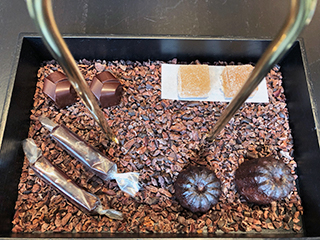 When the wait staff brought us the check, they also brought us a little tray with 4 more chocolate treats served on bed of cacao shells.

Even though we were full, we couldn’t resist. (Next time, I will bring a sandwich bag to take away anything past my limit.) I had to try the golden pâte de fruit made with cacao pulp. Very flavorful, they made me think of tart quince jelly.

The little chocolate cake, called canelé, had a hard crunchy caramelized shell and a soft cake interior. I liked this a lot as it was not very sweet and lightly chocolate.

The caramel bonbon was a very pretty molded chocolate that looked like a knot. Inside it had a caramel layer and a ganache layer. It was well made, but I didn’t like its strong bitter chocolate taste. It was the only piece I didn’t finish.

The last piece, sesame chocolate caramel, did come in a wrapper, so we took it home with us. It was a very nice chewy chocolate caramel with a good sesame taste and a little crunch from the seeds.

All in all, I have to say that Bloom Afternoon Chocolate Tea is a great splurge. The space is beautiful, the food and drinks are good, it’s comfortable, and the sound system is not too loud or obnoxious. It would make for a fun date or a no-alcohol get-together with friends. It’s even nice to go by yourself — lots of small tables, a good playlist, and with so much visual stimulation and delicious chocolate, you don’t need a companion to enjoy Bloom.

However, if you do the Afternoon Chocolate Tea, you might experience a bit of chocolate overdose. I’d recommend planning to do something moderately active afterwards to burn off the sugar. All part of a perfect staycation day in SF. Paris can wait! 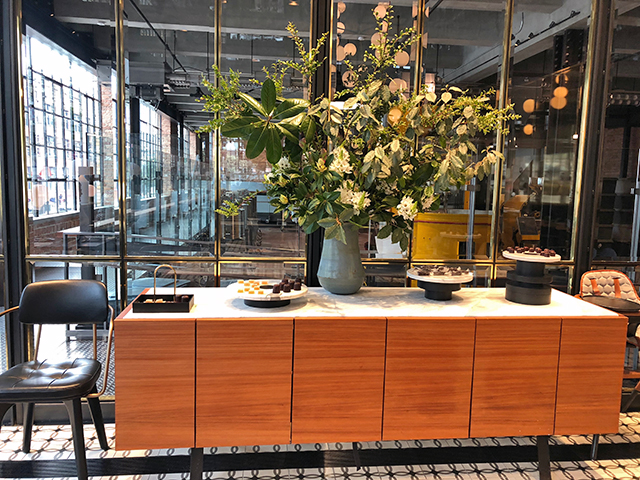 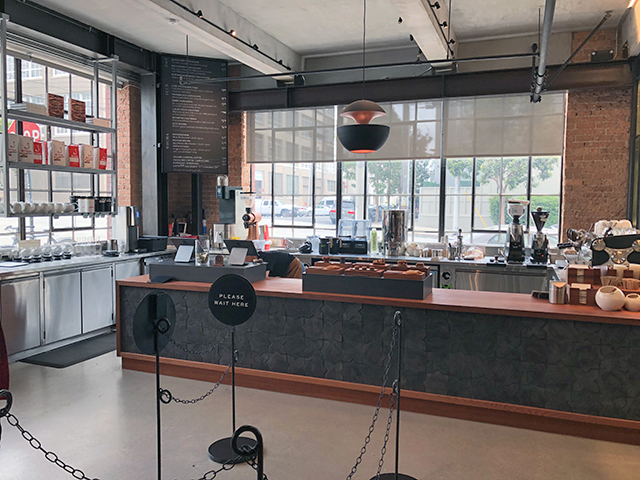 If I didn’t post enough pix of the factory+, SF Eater has more shots of the space pre-opening.