Interesting to me was that my like/love ratio on toffees was a reverse of the one on white chocolate, which is part of me rethinking my hatred of white chocolate. And since 2 of the toffees I loved in this competition were white chocolate, I pretty much have to stop saying I hate the white stuff.

Also, like the other competition, the SFBA competitors submitted some of my fav entries. So I am definitely gonna talk about them first. 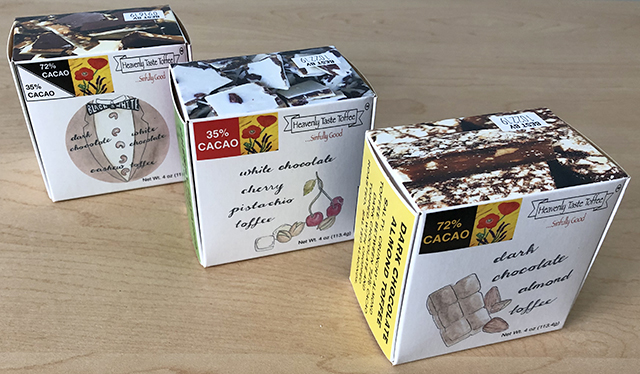 Heavenly Taste Toffee, an SFBA toffee maker now located in Oakland, submitted 3 entries. I loved 2, and liked the other.

Their classic Dark Chocolate Almond Toffee was one of my favs. I like that Heavenly Taste coats both sides of their toffee with chocolate since I’m more of a chocolate fan than a candy fan. They are also generous with the nuts, with big pieces of almond inside the toffee, plus a fine dusting on top.

This toffee was as advertised, with a strong chocolate/almond flavor. The toffee itself was good, crunchy, not chewy and not too hard. The liberal amount of dark chocolate and almonds also made for a not-too-sweet toffee.

The other Heavenly Taste Toffee I loved was the White Chocolate Cherry Pistachio Toffee. It’s funny, Matt has offered us a taste of this toffee before at the Chocolate Salon, and I turned him down because — white chocolate. Now, I want to say how wrong I was.

The toffee was attractive, with whole dried cherries and chunks of green pistachio sprinkled on the white chocolate. And it’s a good white chocolate, the toffee is buttery with good mouthfeel and not too sweet. The chewy cherries are a nice fruity touch that again isn’t too sweet; and unlike a lot of pistachio chocolates, you can actually taste the pistachio because of the mild chocolate. As with the Dark Chocolate Almond Toffee, this toffee has a good texture, not chewy or hard.

Their 3rd entry, the Black & White Toffee, was nice, but not awesome like the other 2. The toffee was a little chewy, and the combination of dark chocolate and white chocolate didn’t work together like the other combos. Instead, it seemed to be more about the contrast between the 2, which I guess is the point. 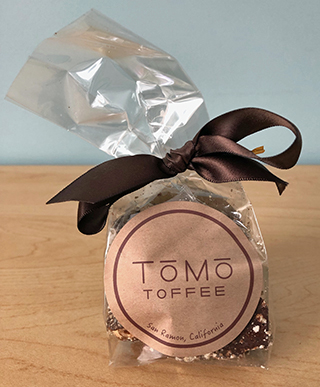 Tomo Toffee’s package is simple, but cute, and displays the toffee inside

The other local toffee I loved was from Tomo Toffee, based in San Ramon. Their Dark Chocolate Toffee is a classic perfected, starting with the distinct chocolate aroma when you open the package.

The toffee itself is a Southern inspired masterpiece using pecans for the nuts. And it has chopped pecans all the way through, so you can taste that it’s not just nutty, but distinctly pecan. It’s also very chocolatey and not too sweet. Finally, the toffee is buttery, crunchy, and dissolves cleanly.

Tomo Toffee’s Dark Chocolate Toffee received Gold for Best Taste, Best Texture, and Top Toffee, and was the only entrant to receive the highest star rating (4.5).

Tomo Toffee is available via their website, at special events, and at some local stores. Check their website. 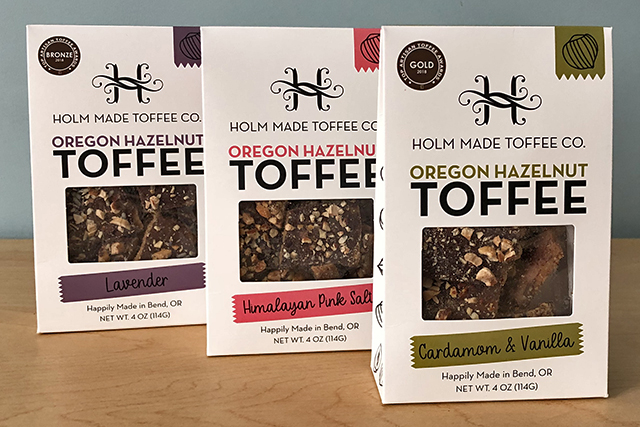 Those are windows on the Holm Made Toffee packages displaying the actual toffee inside, not photos

I loved all 3 entries by Holm Made Toffee Co., a Bend, OR, toffee maker. Their packaging is attractive, with the toffee visible inside enticing you to try it.

One of their distinctions is that they use hazelnuts, specifically Oregon hazelnuts, in their toffees. Hazelnut and chocolate are a classic pairing, from high-end European truffles to kid-approved Nutella. Of course, they make a great choice for the nut in toffee.

The Holm Made Himalayan Pink Salt Toffee was a simple, classic toffee. The pieces were thick, but not too large, with lots of roasted hazelnuts and just the right amount of salt to heighten the flavors, but not make the pieces salty. Like Heavenly Taste, they coat both sides of the toffee with chocolate, so that’s always a plus with me. You can taste that they use quality ingredients, no odd/off flavors, and they know their candy-making techniques — pieces were crunchy, easy to chew and didn’t stick to my teeth, and the toffee wasn’t greasy or overly sweet.

The Holm Made Cardamom & Vanilla Toffee was an interesting toffee that reminded me a little of a sweet chai tea drink — with nuts and chocolate added, so — bonus.  It was very good toffee with a balanced, subtle flavor that started out buttery; the cardamom came in toward the end.

I approached the Holm Made Lavender Toffee with some dread because a little floral goes a long way with me, and I thought it might taste soapy. But like the rest of their toffees, this was a balanced, subtle piece. Lots of chocolate and nuts on thick toffee that chewed easily and tasted lightly lavender. The lavender taste was distinct but not soapy, and the tastes were balanced. 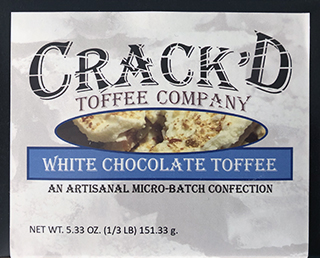 There were 3 white chocolate toffees in this year’s competition, and I enjoyed them all. And while Crack’d Toffee Company’s White Chocolate Toffee didn’t get a lot of love at the competition, I loved it.

Like Heavenly Taste’s 2 white chocolate toffee entries, Crack’d Toffee Company’s White Chocolate Toffee was buttery and not too sweet. It started out crunchy, then became a little chewy, but it didn’t stick to my teeth. It had strong vanilla notes, and was surprisingly a little salty, which I think helped keep it from being too sweet.

In addition to the entries described above, there were quite a few decent toffees in the competition as well:

You can view the complete list of winners on TasteTV’s site.