The doctor is in — to chocolate

When visiting SFBA’s wine country, the first chocolatier you might encounter in Sebastopol, CA, is Eye Candy Chocolatier.  It’s conveniently located in Gravenstein Station on Rte. 12, across the street from The Barlow, Sebastopol’s outdoor market district. 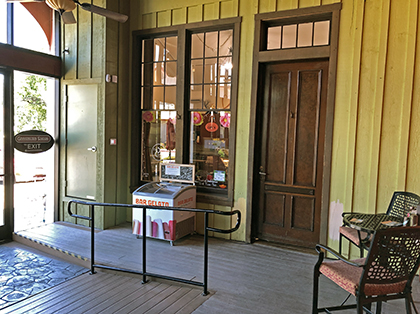 The shop is tiny, maybe 9’x12′, and maybe more amazingly, it’s also the kitchen where Sonja Schluter, Eye Candy’s founder and chocolatier, makes all the confections sold in the store. She’s able to do that because the space is a store by day and kitchen by night.

Sonja has a similar duality in herself: she’s an ophthalmologist by day and a chocolatier by night. Hence, the name, Eye Candy Chocolatier. So if you go there, you probably won’t meet the chocolatier herself, but the staff working the day we visited was very pleasant and helpful.

Sonja opened Eye Candy Chocolatier in 2016, and her confections are mostly dark (55-65%) chocolates made with French and Belgian couvertures. In line with her first profession, Eye Candy donates 10% of their proceeds to the Glaucoma Research Foundation.

Eye Candy Chocolatier offers preservative-free truffles, caramels, dipped chocolates, bars, and pate de fruit, with some vegan options. We got a box of chocolates and some dipped oranges to try.

A feast for the eyes 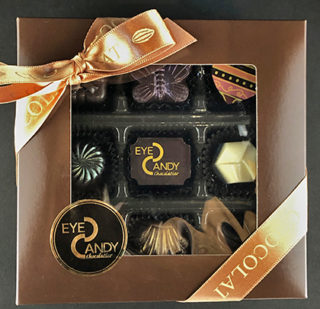 Everything about this Eye Candy Box is pretty

Eye Candy is not just a clever name, it’s an accurate name for how pretty the bonbons are. They are a collection of interesting shapes, some decorated with attractive transfer patterns or glowing luster dust. The bars are just as pretty, with large whole nuts or dried fruit pieces scattered across the top. Dipped pieces are half dipped, so you can see the fruit/snack inside.

All the confections are packaged in clear envelopes or boxes with windows so you can see how pretty they are. It makes perfect sense: Of course, someone whose profession is all about vision would emphasize the visuals. Luckily, based on our experience, the taste was on par with the visuals.

We tried Eye Candy’s 2 best sellers first: The Raspberry had a nice scent of raspberry, and we immediately tasted raspberry when we tried it. The ganache was very smooth, and the piece melted quickly. In fact, we found Eye Candy’s ganaches to be consistently smooth; they melt quickly and have a good mouth feel.

We weren’t as wowed by the Salted Caramel. It was well made with a layer of caramel on top of dark ganache inside the dark chocolate shell, but it was very sweet, and not salty enough to us. 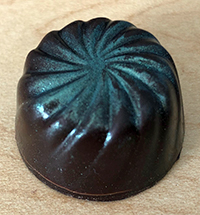 We were more impressed with the rest of the box, especially the alcohol-based ones. They all had a boozy bite to them, with the Vanilla Brandy having a strong brandy smell and the strongest bite with a bit of a burn. The vanilla taste came after that with a strong cherry aftertaste.

The Absinthe started with a strong licorice taste, then the boozy bite. The chocolate was good and balanced with a licorice finish. The other alcohol-based bonbons, Amaretto and Orange Grand Marnier, were tasty too, but more subtly boozy. They were distinctly as advertised, with the Orange Grand Marnier smelling citrusy, and the Amaretto having a sweet almond aftertaste.

In addition to the alcohol-based bonbons, we really liked the coffee-based Tiramisu and Kona Latte, the Cool Mint, and a couple of the plain chocolate ones: the Signature Vegan and Classic Dark. 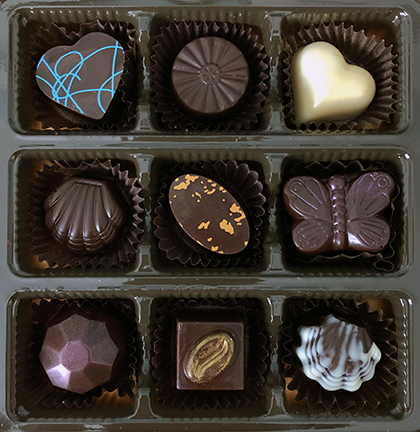 We tasted coffee first in the Tiramisu, then chocolate with an unexpected coconut undertone. The Kona Latte was a cool concept: The molded coffee bean on top of the piece was filled with white ganache — the milk foam in the latte, while the coffee part was the dark ganache, which like the Tiramisu was very chocolatey  and a little coconutty.

We liked the Cool Mint, which smelled minty and chocolatey. It also had a good balance between the 2 tastewise: no weird or overpowering minty taste. It’s like an exceptional After 8 mint. 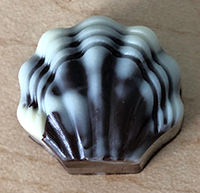 The only pieces we didn’t like were the 2 white chocolate truffles, Meyer Lemon and Vanilla Honey Lavender. They were pretty, and we liked their fillings: The Meyer Lemon’s yellow ganache smelled lemony and tasted lemony; the Vanilla Honey Lavender had a very light lavender flavor, so it was inoffensive, and we thought the addition of vanilla and honey was smart. The 3 different flavor notes were almost on same level, with the vanilla being the strongest.

In fact, the flavor strengths matched the ingredient order in the name, which is pretty cool. But the shells were too thick (unlike the dark chocolate pieces, which had perfectly thin shells), too sweet, and a little soapy tasting.

Despite not liking the white chocolate bonbons (and if you know me, that’s not really a surprise), I thought Eye Candy’s truffles and caramels were very good. The pieces are pretty and well made; and the fillings taste like their name, but are still very chocolatey.

The non-bonbon chocolate we tried, the dipped orange slice surprised us because the dried orange was hard, hard, hard. It was softer in the chocolate-dipped part, but that’s only half the slice. We are used to a chewier dried orange, so this was disappointing. But the flavors were good. 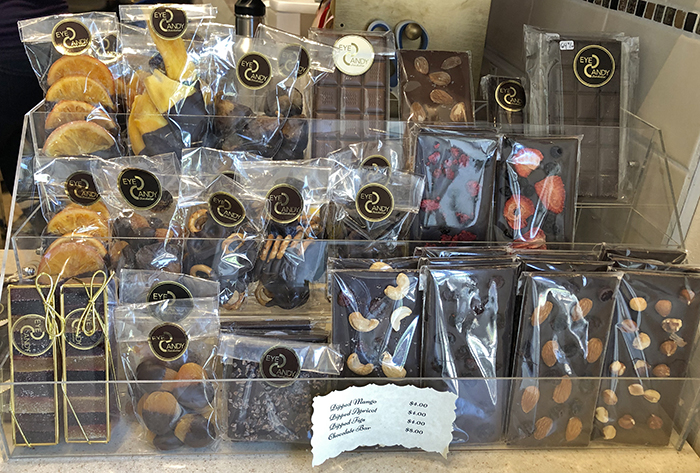 Eye Candy Chocolatier: 6761 Sebastopol Ave., Sebastopol, CA. Also has an online shop, but it is limited. To buy from their full line, you must visit the store. We recommend you stop by on your next wine country tour.