On our Wine Country Chocolateering: Napa Edition tour, we visited Vintage Sweet Shoppe, the only place in Napa that makes and sells its own chocolate AND wine.

Started 40 years ago as a more traditional candy store, the current owner added wine to the mix, including their own wine label and wine-infused chocolates. They also do chocolate covered wine bottles of other wineries’ offerings, which got them a bit of national press coverage back in the day.

There is so much to see in Vintage Sweet Shoppe, you can almost play “Where’s Waldo?” with the chocolatier

In addition to wine and chocolate, Vintage Sweet Shoppe (VSS) sells coffee drinks, fudge, ice cream, traditional non-chocolate candies, baked goods, and brittles. They also offer chocolate and wine tastings (reservations required). And you can watch them making their chocolates, fudge, and brittle through a window in the open kitchen.

At one time, VSS was in an out-of-the-way storefront that is now home to La Forêt, another Napa chocolatier. In 2006, they opened a shop in downtown Napa in the recently converted Napa Mill complex next to the Napa River, which is a much more convenient location for day trippers. It’s walking distance from the other downtown Napa chocolatier, Anette’s Chocolates. 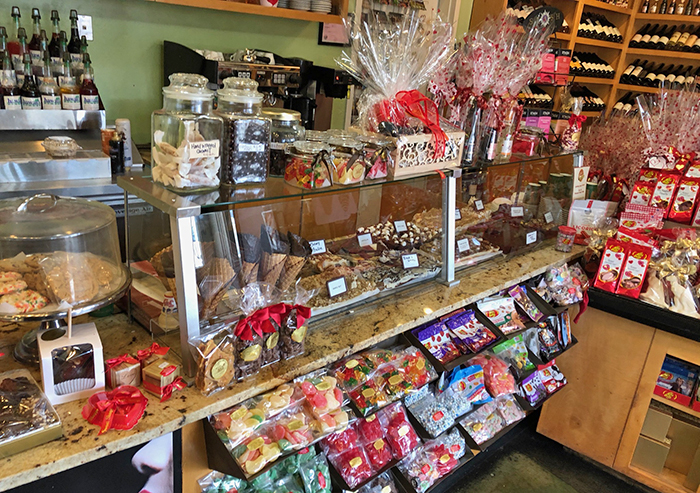 View of some of the non-chocolate items VSS offers, including the wine in the back

The VSS shop is divided into roughly 3 sections: To the right is the wine cellar, where they also hold the tastings. To the left is the chocolates section. And in the middle is everything else. It’s a crowded but organized space.

Because our focus is local artisan chocolate, we hung a left at the door and explored that area. VSS makes lots of classic chocolate candies: In addition to the truffles, we saw English toffee, turtles, rocky road, dipped and molded chocolates, and a selection of barks in the case.

One thing I wanted to check out on this visit was why their truffles prices online were so high: A box of 12 truffles was $49.95, which works out to $4+ per truffle. When I got to the store, I saw that they were $2.50 a piece, which is a much more reasonable price. If you buy online, shipping is included, which I assume is why they are so high online. 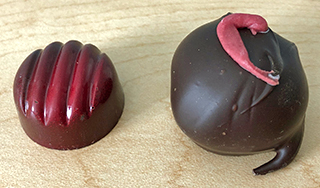 VSS offers about 20 different types of truffles in their shop, including versions flavored with nuts, fruits, herbs, wine, and liqueurs. Their truffles are on the large side, not as big as Joseph Schmidt’s giant egg shaped truffles were, but much bigger than typical French truffles.

The rest of the chocolate case was filled with their other chocolate confections like malted milk balls, chocolate dipped marshmallow pops covered in sprinkles, and turtles in 3 types of chocolate (dark, milk, and white) and 2 types of nuts (pecans and almonds). 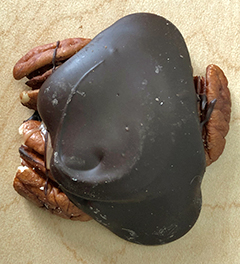 Is it just me or does this pecan “turtle” look more like a crab?

We decided to try some of their wine flavored truffles (since they are a wine & chocolate candy maker) and bought some other house-made chocolate confections too.

I had a few problems with their truffles. Number one was that there was no menu card. While each of their truffles looks different from the others, I couldn’t remember them off the top of my head the next day when we sampled them. Luckily, cacaopod had taken pix of the display case so we could refer to that to identify the truffles.

Another problem I had was that they were too sweet for me. Even though we got dark chocolate truffles, they were traditional American style chocolate, which skews sweet. The shells were also too thick and hard, so the balance between the shell and the soft ganache was off.

Finally and surprisingly, they were not wine-forward at all. In fact, I could hardly tell that 3 of them were wine based at all. And the 4th, a Cabernet was only mildly wine flavored. I’m not sure how they are adding the wine, but cacaopod suggested they might want to create a wine reduction to boost the flavor. Since they make their own wine too, they could experiment a bit to increase the intensity. 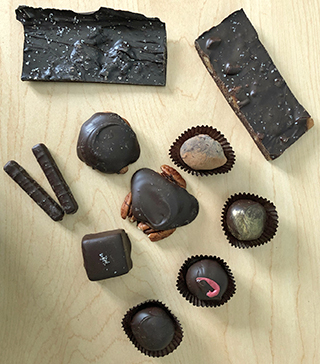 We assembled our own variety pack

The other chocolate confections we tried were:

An orange stick that had a good orange smell and a very jelly jellied orange interior, but the chocolate was too sweet;

A couple of dark chocolate turtles, which like the orange stick would have been delicious with a better chocolate (and less of it) because the caramel and nuts were good (the almond one tasted the best with a better ratio of nuts to chocolate);

A couple of barks (the Salted Toffee Bark was too sweet, but it had a nice crunchiness like a Heath bar; the Dark Chocolate Chili Spice Bark with French Gray Salt was better, like it was made with a different chocolate than the rest of the items we tried, plus the heat was done well — it built up slowly as the chocolate melted and lasted afterwards, but it was never too hot); and finally, the winner: 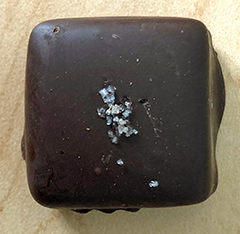 This is the piece to try: a big chewy caramel in a not too thick shell and just a touch of salt

This was so good, it seemed like it was made by a different chocolatier. The shell thickness was right, not too thick, not too thin. It was a big chewy caramel with a nice, smooth texture. The chocolate tasted good, maybe the salt helped balance the sweetness, or they used a different chocolate. As for the salt, it was not overdone, and the piece had a nice salty aftertaste. Truly VSS’s best chocolate. In fact, we would recommend that if you are interested in trying their chocolates, stick to any that include their caramel — if you like chewy caramel, they seemed to be the best bets.

Vintage Sweet Shoppe is located at 530 Main St. in Napa. They are open 7 days a week. If you want to try their chocolate and wine tasting, you have to reserve it in advance. Contact info is on their website. They also have a limited selection of chocolates and wine on their website.