On our annual East Coast trip, Cacaopod & I managed to squeeze in a stop to one artisan chocolatier in the DC area, Artisan Confections of Arlington, VA. Walking into its surround smell of chocolate told us even before we tasted anything that it was worth the effort. 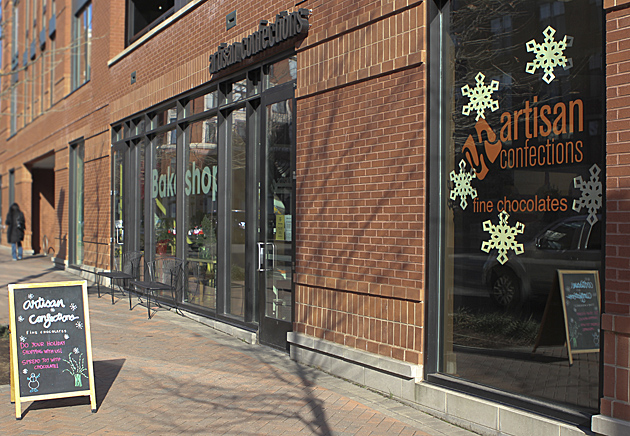 When in DC, make a side trip to Artisan Confections in Arlington by car or a 2-block walk from the Clarendon Metro station.

Artisan Confections is one of the few truly artisan chocolatiers in the DC area and probably the first locally in the recent wave of new chocolate makers who hand-make confections with high quality ingredients (starting with French chocolate, butter & cream) and no preservatives. It was started over 8 years ago by Jason Andelman, a DC pastry chef/chocolatier and moved to its beautiful shop with open kitchen 2 years ago. This year they plan to open a second retail location in the area. 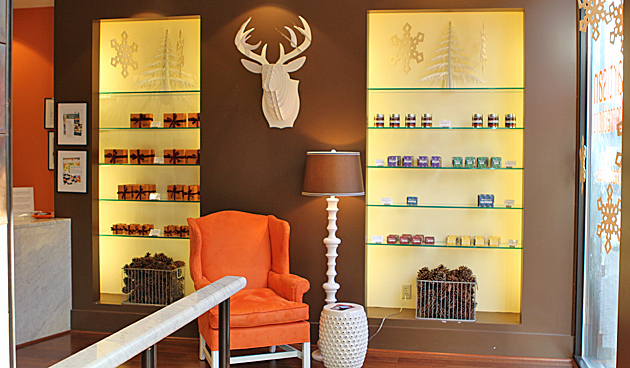 Artisan’s beautiful designs extend to the packaging and interior of the shop. (The seat is nice for DIY aroma therapy coming from the kitchen in the back.)

Even though we stopped by on Christmas Eve, a busy time for any chocolatier, Jason graciously took time to chat with us about his business and art.

“I was a pastry chef, but a chocolatier on the side,” he said in explaining his path. “And I’ve been making chocolate for over 10 years now.”

He credits his success in part to keeping his business personal. Unlike the typical American business model of grow it big until it breaks, Jason plans to “keep it small by doing well at this level.”

So while he does offer chocolate over the Internet and has a few wholesale accounts, most of what he ships is local and he doesn’t pursue additional outlets that he can’t control. “We don’t use preservatives,” he explained. “So I can sell at other locations at Christmas and Valentine’s Day because it moves, but otherwise no.”

He gives his bonbons a 2-week shelf life, and I don’t think he’s being unreasonable with this short estimation. We sampled the Pistachio-Honey fresh at the store and were struck by its full pistachio taste (which got us wondering why we don’t see much pistachio ganache out here in CA, home to most of America’s pistachio trees). But when we ate another one almost 2 weeks out, the pistachio flavor had faded and was overtaken by the honey. Still nice, but not compelling like before. So I think he is spot-on and very honest in 1) Concentrating on the local market, and 2) Enforcing a 2-week rule.

The thrill of the new

If I lived in the DC area, I would make it a habit to stop by at least a few times a year because Artisan Confections does something I haven’t seen any other chocolatier do: Once a year the entire product line changes (except standbys: Salted Butter Caramel, Tahitian Vanilla Bean, Malted Milk & Fresh Mint), and every few months several seasonal choices are changed too.

The changes include new flavors that result from Jason’s experiments and old favorites brought back often due to customer requests. Two of the seasonal choices we tried won us over: Orange Clove, which starts with clove (we don’t run into that flavor in chocolate very often) and ends with a clean orange tang, was an interesting combination we all liked. But the Pear Almond wowed us with not only a fruit pie taste but a cooked pear texture(!). We think that came from the way the flavors are layered inside the bonbon’s shell: There was a layer of almond ganache (AKA the pie crust) & a translucent pear pate de fruit layer. We chocolateers thought it was very cool. 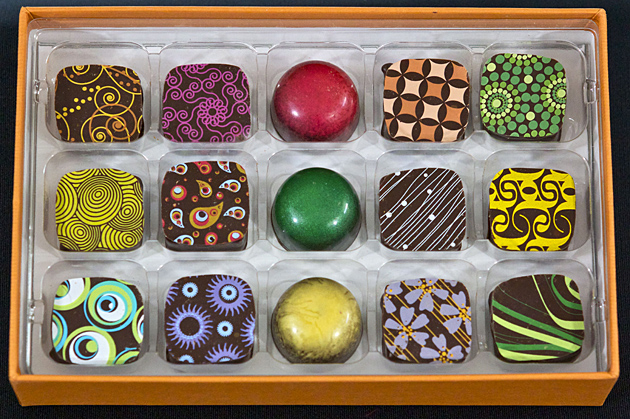 On top of the flavor changes, Artisan also holds contests for local artists to design the transfers that decorate the seasonal bonbons. What a great excuse for regular visits: Edible art shows.

Learn from the master

Another fun thing Artisan does is chocolate-making classes. “The classes fill up fast,” Jason said. “And people always have a really good time.”

I asked Jason if his classes had a started a mini-chocolate making boom (thinking of how out here Chez Panisse has birthed numerous food operations helmed by its alumni), but he said no, it’s so basic that’s it’s mostly just a fun night out for local moms and such.

Rounding out the collection

In addition to bonbons, Artisan also produces hot chocolate, barks, nut bars and chocolate-covered almonds. I tried the peanut butter bar, which included what I think is a nice solution to the eternal peanut butter oil in chocolate problem: the peanut butter is a praline, layered with a honey ganache, then coated in milk chocolate, which results in a mildly crunchy peanut butter (think sugar wafer crunch, not peanuts) in a bar that holds together. Now if only they offered a dark chocolate version …