It was a small pool of contenders in the 2020 Best White Chocolate Awards by TasteTV, and a citrus theme dominated the flavors. The tangy flavors of lemon, orange, and the more unusual bergamot and yuzu were a good contrast with the sweetness of white chocolate, and made for most of the best entries. There were no SFBA contestants, but I still found a few pieces and chocolatiers to recommend.

They don’t really have that category in this competition, but if they did, Tandem Chocolates, Reno, NV, would have won it. And that’s not just my opinion. They swept the awards with their 2 truffle entries, Elderflower Lemon Cordial and Raspberry Yuzu Crunch. Both truffles were beautiful and tasted delicious. 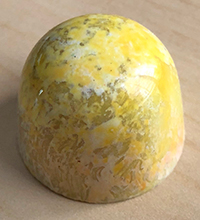 The Elderflower Lemon Cordial was a white dome liberally splashed with yellow and gold. The white chocolate shell was soft, and the inside was semi liquid with a light lemony smell. It tasted like lemon meringue pie, and ended a little buttery. A very good, not too sweet white chocolate truffle, it was my favorite piece in the competition.

I think it was everybody else’s favorite too: It won the Gold in all categories (Best Ingredient Combinations, Best Taste, Best Texture, and Most Unique). It was rated the #1 Best White Chocolate for 2020 and received 4.5 stars (the highest possible). 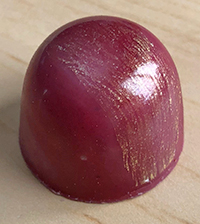 Tandem’s other entry was very good too. The Raspberry Yuzu Crunch was a raspberry colored dome dragged with gold luster dust. Like the Elderflower Lemon Cordial the white chocolate shell was a smooth, soft texture, and the inside was an interesting 3 layers: semi liquid on top of praline and ganache. It had a good raspberry smell, but I tasted the citrusy yuzu taste first, then raspberry. It was a nice blend, and the raspberry lingered afterwards.

It did very well in the competition, with Silver for Best Taste and Best Texture, and Bronze for Best Ingredient Combinations and Most Unique. It was rated #3 Best White Chocolate (in a 3-way tie), and also received 4.5 stars.

You can buy Tandem Chocolates online or at their storefront in Reno.

Another chocolatier’s entries I liked almost as much as Tandem Chocolates’ were from competition veteran Panache Chocolatier, KS, known for their big truffles. Like Tandem, they had 2 white chocolate truffle entries, and both did very well in the competition. 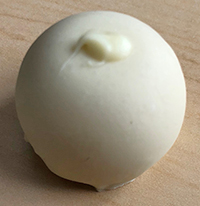 The London Fog truffle was another citrusy entry with Earl Grey tea and Madagascar vanilla as its main flavors. It was a simple all-white sphere with a single squirt of more white chocolate on top — like a wisp of fog.  It had a thin shell and a nice earl grey smell.

The vanilla tempered the tea, which can sometimes be perfume-y, so the flavor ended up being more citrus overall and not strongly identifiable as Earl Grey. It also wasn’t too sweet, which I am always glad to see in a white chocolate. The truffle description said it was based on England’s London Fog latte, which I now want to try — if we Americans are ever allowed to visit other countries again.

It received Bronze for Best Ingredient Combinations, Best Taste, and Best Texture. It was rated #3 Best White Chocolate (in a 3-way tie), and also received 4.5 stars.

Panache’s other entry was a big, thick rectangular all-white piece, with an intriguing name, Smoked White Chocolate. Its description said the ganache had been smoked with fruit wood.

The ganache was a light brown and smelled fruity. It also tasted fruity, but not a specific fruit to me, and not too sweet, with a little smokiness at the end. I thought it was interesting and tasty. I wish other chocolatiers would try this technique, maybe add other flavors too. It received an Honorable Mention for Most Unique, and rated 4 stars.

Panache Chocolatier’s website is also currently under construction, and they ask that you call or visit their shop. Check their website for details.

Honey, the other sugar

Another double truffle entry was from competition veteran Seleušs Chocolates, Seattle, WA. Both pieces were honey themed, big domes that looked similar. The only way to tell the difference was one was slightly darker than the other. 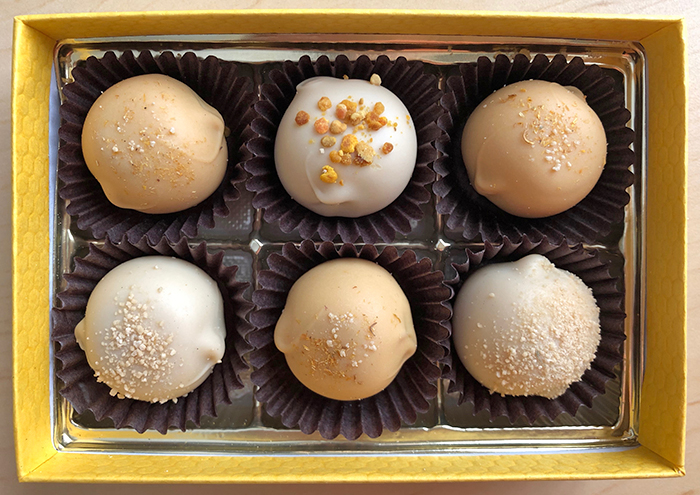 The darker blonde, the Bavarian Acacia Honey Truffle, had a light brown ganache that smelled healthy. It was too sweet for me and didn’t taste like honey to me. Still it received Bronze for Best Taste and Best Texture, rated #3 Best White Chocolate (in a 3-way tie), and ranked 4 stars.

I liked the lighter blonde better. Seleušs’s Eden’s Honey Truffle had a honey colored ganache with an immediate honey flavor. I thought this was what a honey truffle should taste like. It received Bronze for Best Ingredient Combinations and Best Texture, and an Honorable Mention for Best Taste and Most Unique. It rated #2 Best White Chocolate and ranked 4 stars. 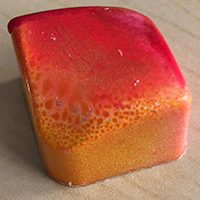 The last truffle entry in the competition by Coco Gusto Chocolates, Denver, was eye catching, painted with yellow and red luster dust, and shaped like a square that dipped down at 2 opposite corners. The Hibiscus Passion Truffle didn’t include a description or ingredient label but it seemed to be flavored with some alcohol with the hibiscus and passion fruit. It didn’t have enough inclusion/flavoring for me, and was instead too much white chocolate. It received Honorable Mentions for Best Taste and Most Unique, and rated 4 stars.

Finally, a contestant with a shop on their site! You can order Coco Gusto truffles and bars online. 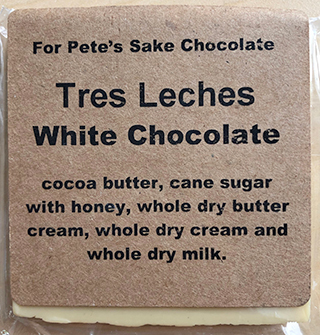 For Pete’s Sake labels were better than nothing, but missed some important info

There were a few other mysterious entries besides the no-description truffle from Coco Gusto. Two were from a mysterious chocolatier, For Pete’s Sake Chocolate, which has no website, no social media, and not even an address on the label. It’s a shame too, because their Tres Leches bar was good. The butter, cream, and milk tempered the white chocolate so it was not too sweet, and I liked the bar’s milky taste. It received Silver for Best Ingredient Combinations, Bronze for Best Taste, and an Honorable Mention for Best Texture. It rated 3.5 stars.

Their other entry, Raspberries & Cream, looked like a ruby chocolate bar with its dusky pink color, but it was white chocolate flavored with milk, cream, and freeze-dried raspberries. I didn’t like it, it was perfume-y and needed more raspberries to balance the white chocolate and milk. It received an Honorable Mention for Best Texture and rated 3 stars.

The third mystery entry had no label. It was just a 4″ long narrow yellow stick of white chocolate in a clear cellophane envelope. It was unusually hard, since white chocolate is just cocoa butter, it’s normally softer than other chocolate. It smelled citrusy and tasted like lemon chocolate and wasn’t too sweet, but for me it was actually too lemony, bordering on chemical strength. It was only after I got the judging sheets that I found out this was an Organic Meyer Lemon Stick from BACI Chocolatier, Windsor, CA. So there was a local entry in the competition!

Turns out this mysterious entry was local

BACI’s Lemon Sticks received Bronze for Best Taste and Best Texture, and a 3.5 stars rating. You can order BACI chocolates and other sweets on their website.

There were 3 white chocolate toffees in the competition, 2 flavored and 1 plain. 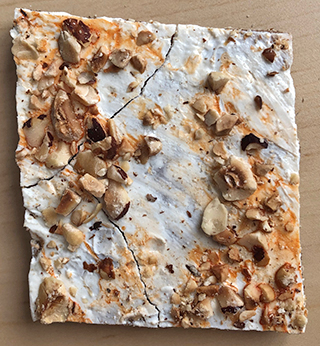 Holm Made’s other entry, Orange Creamsicle Toffee, was a very good toffee, as can be expected from Holm Made, with a good crunch and lots of chopped hazelnuts. It was a little too sweet for me, and the orange flavor wasn’t pronounced until the end, which was a disappointment after the name gave me expectations of a creamy orange flavor. It did well in the competition, winning Silver for Best Taste and Best Texture, and Bronze for Best Ingredient Combinations. It rated 4 stars.

You can order toffees and other hazelnut treats from the Holm Made website. 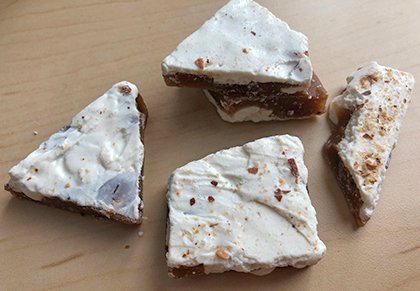 The third white toffee entry was from another competition veteran, Crack’d Toffee Company, who also competed in this year’s toffee competition. Their White Chocolate Toffee, like their other toffee entries this year suffered from a lack of nuts. There was plenty of white chocolate, drizzled on top like icing, plus white chocolate chips in the toffee, but at most there was a dusting of nuts. The result was sweet and a little chewy, but not nutty, which I found disappointing. It received an Honorable Mention for Best Taste and rated 4 stars.

You can buy Crack’d Toffee online, at some CA retail locations, and at special events. Check their website for more info. 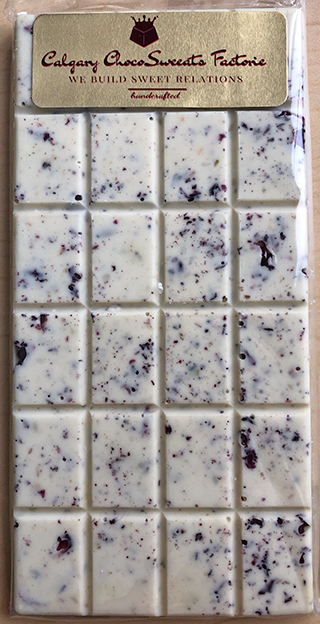 Finally, a new competitor had 3 entries with a very Indian dessert vibe to them. I don’t know anything about Calgary ChocoSweeats Factorie, in Alberta, Canada, but based on the ingredients and level of sweetness in their entries, I’m guessing there’s some Indian background to the company.

The entry of theirs I liked the most was the Indian Kulfi Bar. It was an attractive bar of white chocolate with lots of dark bits scattered throughout. Reading the label, the dark bits were rose petals, green cardamom, pistachios, and cashews. Kulfi is Indian ice cream, and these ingredients would be typical flavorings in kulfi.

The bar smelled strongly of cardamom, and even though the first ingredient listed was rose, the rose was not pronounced; instead, it balanced the cardamom. I mostly liked this bar except it was pretty sweet, and the cardamom was not finely ground. Instead it was more like cracked pepper with some big pieces that I found unpleasant to chew.

But our newest chocolateer at CBTB, chocoloco, didn’t mind the big pieces and liked the bar. She said it reminded her of cracked peppercorns used in other foods, like CocoTutti’s Szechuan Peppercorn Toffee with Cashews, which I really like, so I think it was a case of the blast of cardamom from the big bits was too much for me. It received a Silver for Most Unique, and Bronze for Best Ingredient Combinations and Best Taste. It rated 3.5 stars. 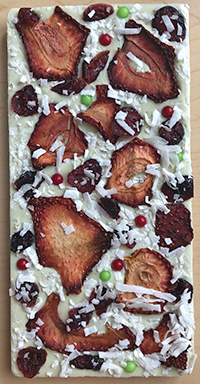 Their other bar, The Organic Green Tea Bar, was a mashup of matcha flavored white chocolate covered with dried strawberries, cranberries, coconut, and little green and red sugar pills. The overall flavor was fruity, but I didn’t like texture of the dried strawberry slices; and it was too sweet, with not enough matcha to temper the sweet. (I’d recommend Socola Chocolatier’s Crunchy Matcha Green Tea White Chocolate bar if you’d like to try a good white chocolate matcha bar.) Also, the coconut flavor got lost in everything else going on. But it did well in the competition winning Silver for Best Ingredient Combinations, Bronze for Best Taste, and an Honorable Mention for Most Unique. It rated 3.5 stars.

Their third entry, Rose Coconut Truffle, looked like it was supposed to be a riff on a cupcake but it got squashed somewhere on its way to me, so I’m not sure. It was a soft pink truffle covered in coconut flakes, placed in a mini-cupcake liner and topped with a plastic heart that upon closer examination was filled with a sugary red semi-liquid/icing that you could squeeze out, I guess if you wanted more sugar.

I did not like the smell or the taste of the coconut and rose combination. On the plus side, the truffle was not as sweet as the 2 bars, and it had lots of crunchy chewy coconut flakes, so it was coconut first on tasting. But when the rose came in later, it tasted weird to me. It rated 3 stars.

You can buy Calgary ChocoSweeats Factorie’s competition chocolates and more on their website.

Visit the International Chocolate Salon site to see the full list of winners from the 2020 Best White Chocolate Awards.