The Tate art museum in London opened a new exhibit this week that attempts to engage more of your senses when viewing the art in the exhibit. According to their website, the Tate Sensorium, open through 9/20/15, “is an immersive display featuring four paintings from the Tate collection. You can experience sounds, smells, tastes and physical forms inspired by the artworks, and record and review your physiological responses through sophisticated measurement devices.”

One of those works is Francis Bacon’s 1945 “Figure in a Landscape,” which to this former art student looks like one of his typical unsettling, why-does-he-always-dismember-his-models works. They’ve paired it with chocolate. 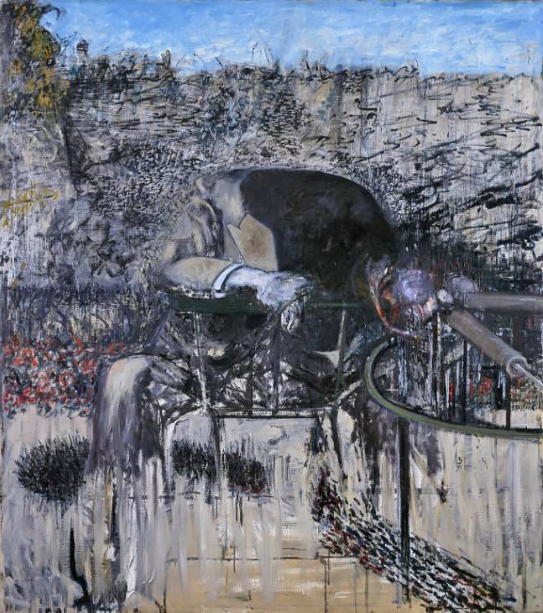 Figure in a Landscape, 1945, Francis Bacon

Other artworks are paired with sound, scent, smell, and touch. Why they chose to pair chocolate with the most depressing piece in the exhibit, I don’t understand. Maybe they are trying to cheer us up when we are looking at the piece. Or maybe it’s simply that the exhibitor heard the term Bacon Chocolate and thought it would be a funny twist.

The chocolate doesn’t have any bacon in it. Instead, they were trying to evoke the painting’s “dark nature” by flavoring the chocolate with sea salt, cacao nibs, lapsang souchong tea and edible charcoal.

Edible charcoal? Sounds like they’re trying to mess with the enjoyment of chocolate experience as much as Bacon messed with the representation of the human form.

In case that isn’t enough to color the experience, they also have “mechanized, industrial sounds” playing and scents wafting around the image that include grass, dirt, and “an animalic, horse-like scent.”

I’m starting to think somebody doesn’t like chocolate very much.

Date posted: August 28, 2015. This entry was posted in Chocolate around the World, News, Outside the Bay Area and tagged British chocolate, Francis Bacon, Tate. Bookmark the permalink.