We visited Kollar Chocolates in Yountville while taking visitors around Napa Valley. If you are going to Napa to do some wine tasting, we recommend detouring off Rt. 29 to Yountville to get some for yourself.

The biggest chocolate bar on the planet 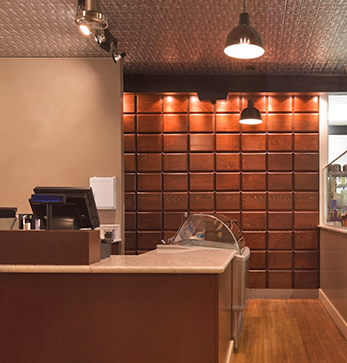 The store is in V Marketplace, an old winery that was converted into a set of boutiques and restaurants. Kollar Chocolates opened there in 2011, and you can’t miss it: It’s on the right past the information booth. If you miss the sign, I’m pretty sure you won’t overlook the giant ”chocolate bar” wall behind the counter. Made out of dark wooden tiles, it’s beautifully understated, while at the same time a large presence in the space.

But then you start looking at the actual chocolates, and it becomes background. The display cases showcase the current truffles available. Along the walls are prepackaged truffles, bars, barks and other chocolates. When we were there, large chocolate owls decorated the shelves. We bought a box of the truffles and some of the Kollar Krack, a dark chocolate bark with Pop Rocks that crackles and fizzes as it dissolves in your mouth. 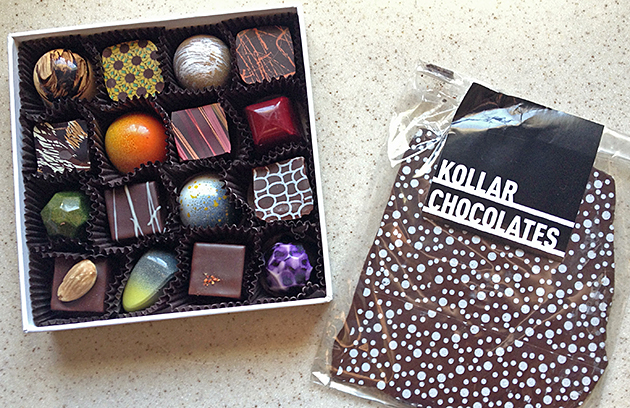 Truffles for the grown-ups. Krack for the kids.

They also sell gelato, but I confess I was so taken by the space and the chocolates that the ice cream offerings barely registered.

Kollar Chocolates are beautiful and made with fair trade, organic and local seasonal ingredients as much as possible, such as local wine and herbs. As you can imagine, they can seem a little pricey — $2.50 per truffle — but we think they are worth it. If you buy one of the larger boxes, the price per truffle goes down, plus you get the whole range of Kollar’s classic truffles and some current seasonal ones.

We four chocolateers at CBTB tried the 16-piece box and liked it so much, we gave Kollar Chocolates a 4-candy-cup rating and added them to our Recommended Chocolatiers list. 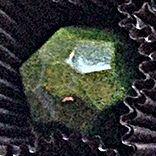 The handmade chocolates are packaged minimally in a black-and-white theme, but the understated packaging makes the brightly colored, hand decorated truffles inside seem even prettier. Between the flavors and the visuals, they make a wonderful gift.

Of the pieces we tried, I liked the Fennel Pollen, Passion Fruit, Peanut Butter, and Sunflower Seed Praline best.

, it’s memorably tasty. We aren’t the only ones to think so, it was also a gold medal winner at the International Chocolate Salon.

The Passion Fruit in a milk chocolate ganache was chewy — not a texture you expect in a ganache, but it complimented its very fruity flavor, maybe amplifying the flavor sensation. 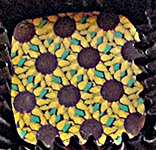 The Peanut Butter in milk chocolate was crunchy. It reminded us of a Clark bar or a Butterfinger. It was a fun, surprising texture in a truffle. I’d love to try it in dark chocolate.

The other praline truffle, Almond Praline, was another crunchy truffle, this time filled with caramelized ground roasted almonds. It was sweet, but balanced. And unlike a traditional hard praline — you won’t risk your fillings on these pralines.

Alcohol without the buzz

We like that the wine and liqueur-flavored Kollar Chocolates capture the essence of the flavors without any alcohol burn.

My favorite of these was the glittery Red Wine in a dark chocolate ganache that uses local Napa Valley wine. It’s fruity, not wine-y.

The Coffee Kahlua in a dark chocolate ganache was subtle. It wasn’t alcohol-y, and the coffee taste developed at the end.

The Orange Grand Marnier in dark chocolate ganache was very orange. The domed shell was nice and thin, and the chocolate melted smoothly in our mouths.

We didn’t care for the Vanilla Rum, made with aged dark Rum in a white ganache. It tasted perfume-y to us. It was the only disappointment in the box.

There’s still plenty to like in a box of Kollar Chocolates. The Earl Grey has an extra shot of Bergamot citrus which we liked: It made the truffle very citrus-y and less perfume-y than we expected. Again, we appreciated the thin chocolate shell. Impressive chocolate making.

Cardamom in a dark chocolate ganache was slow to develop; the cardamom flavor comes at the end.

Espelette Chili is made with French chili peppers. Like the Cardamom, it started out tasting like a plain dark chocolate truffle, then the chili came out at the end. And the heat lingered at the back of my palate.

The Lavender had a distinct lavender taste, but not soapy at all. The truffle was very smooth and light — it dissolved in our mouths with no bitter or sugary aftertaste. It was like the dark chocolate ganache was just a vehicle for the lavender. The organic lavender, like the fennel pollen, comes from Jacobsen Orchards, purveyors to The French Laundry, the local Michelin-rated restaurant, and other high-end places.

Ginger is made with crystallized ginger. We would’ve preferred if it was less sweet and had more of a ginger bite. We did like its somewhat smoky aftertaste and bits of ginger to crunch on.