In recent chocolate news around the world, there’s one for the record books and one that’s music to the ears.

A Casa do Chocolate 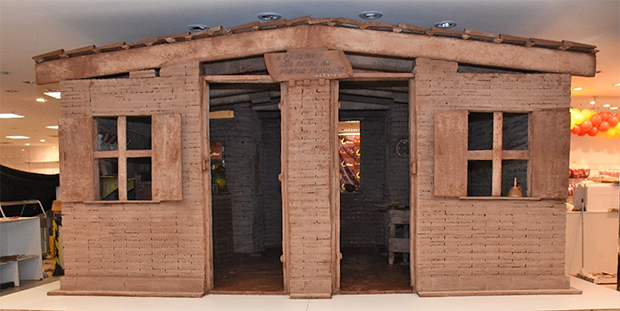 The latest largest chocolate sculpture in the world, as certified by Guinness World Records, is a house made of chocolate bricks with melted chocolate as the mortar, plus all the accoutrements — even a couple of famous people — all sculpted out of chocolate.

Made by Equipe da Casa do Chocolate, A casa do Chocolate resides at the company’s chocolate museum in Uberaba, Minas Gerais, Brazil. The building is about 8 ft. tall and took almost 12 tons of chocolate to make. Maybe most surprisingly it took chocolatier chef Alex Bishop and his crew only 13 days to build the house and everything inside.

Maybe they cheated a little? They used silicon molds to create the sculptures of Brazilian icons Ana Maria Braga and Chico Xavier — but even if it might be more accurate to describe them as molded instead of sculpted, it can’t be easy to mold life-size recognizable replicas of people out of chocolate. And all of it, down to the dishes, was made in less than 2 weeks.

It seems that there’s a tradition out there of breaking records for biggest building made of chocolate. Every year or 3, somebody breaks the record. The last record-holder was Aficion Chocolate near Shanghai, China, who sculpted a building, 14 feet long x 6-1/2 ft. tall out of 11 tons of chocolate in 2015. I don’t know what kind of building it is, and I couldn’t find any description online either. Maybe an old city hall? Or theater building? 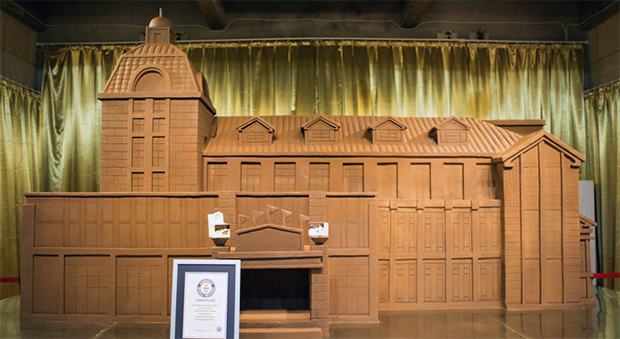 Big, but not big enough anymore

Receding further in time and size, the 2012 World Record building was a replica of the Temple of Kukulkan pyramid in Chichen Itza, Mexico by Francois Mellet. The relatively small chocolate pyramid — only 10’x10’x6′ high ;-) — was set up at the the Qzina Institute of Chocolate & Pastry in Irvine, CA. And it was destroyed at the end of 2012 on the day the last Mayan calendar ended. (I assume that means it was eaten.) 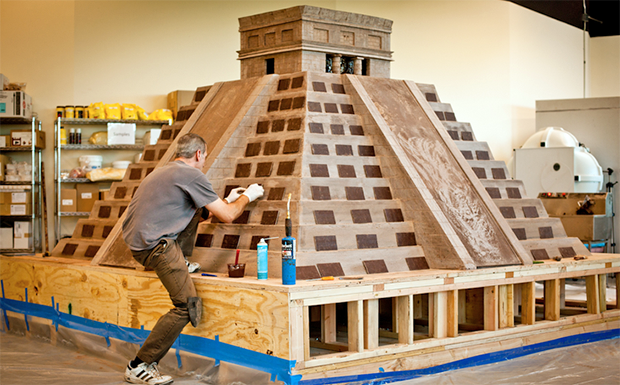 2012 World Record Chocolate Temple didn’t last long: It was destroyed at the end of the Mayan calendar, Dec. 21, 2012

The previous 2 record holders in 2010 and 2009 were both created by Mirco Della Vecchia, an Italian chocolatier, who, together with a team of artists, created a white chocolate replica of the Dome of Milan and a chocolate sculpture of the Dolomiti Mountains. They seem almost cute now in comparison to the trend of mega-sculptures.

Music to the tastebuds

In other chocolate-as-object news, French artist Julia Drouhin is making playable chocolate records. She says that they are good for about 10 plays, by which time they have melted a bit and no longer sound like the recording. She also claims that they are edible. 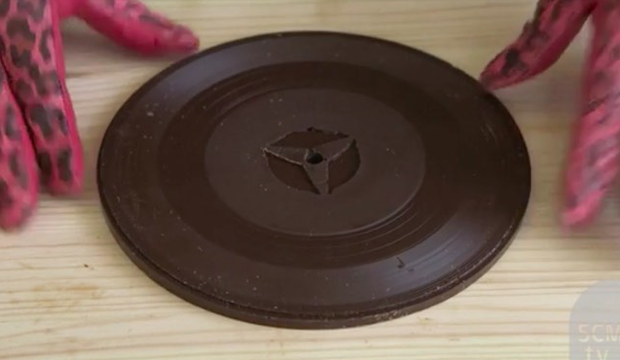 She creates the molds for the chocolate records by pouring silicon over actual vinyl records. Then she pours chocolate into the molds, and after they dry, she freezes the records to make them playable.

The video of a chocolate record playing Canto-pop sounds similar to what old records sound like, softer and muddier than digital music, but maybe the record had already been played a bit and was melting. Julia didn’t start with the idea of chocolate as the medium, but she said that she wanted something ephemeral, that would disappear as it played.

Chocolate turned out to be just the ticket: “It’s close to the wax that makes the cylinder, which is the ancestor of the record,” she told the South China Morning Post.

After it’s melted too much to play anymore, you can eat it. However, if it is waxy like an old  phonograph cylinder, I think I’ll pass.

Date posted: May 8, 2018. This entry was posted in Chocolate around the World, Featured, News and tagged Brazil, China, Guinness World Records. Bookmark the permalink.