In May 2018, Cacaopod and I took a 16-day trip around northern Europe. We had several focuses: art, trains, and chocolate!!! My first report is on Hamburg, Germany.

After arriving in Paris, we took an overnight sleeper train to Hamburg to spend the day with a friend and re-visit the city for the first time since I was 20 (we are talking decades here). We didn’t have time between catching up and walking around town (14.7 mi!) to visit any chocolatiers that day, but we are hoping for a next time with more time to visit the artisan chocolate scene in Hamburg. I did discover a couple of chocolate-in-Hamburg-related topics to share.

Cacao was a big deal

Hamburg is a big port town, and historically it was a place where a lot of cacao beans passed through on their way to being made into German chocolate. Before container shipping, that meant warehouses on the waterfront stored the beans until they could be delivered elsewhere. 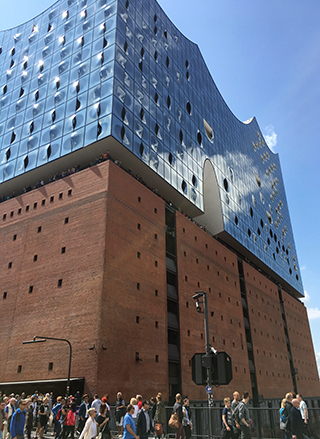 The brick bottom is a former cacao warehouse, the glass structure on top is a concert hall. You can get a sense of the scale by noting that between the two is a terrace full of people enjoying the view.

Some of those old warehouses still exist in the Speicherstadt, an historical warehouse district on the waterfront, which is also a UNESCO World Heritage site. Built in the late 1800s/early 1900s, some of the warehouses are still used as warehouses. Others have been transformed into shops and entertainment venues, including Chocoversum, an interactive chocolate museum, which might be fun to check out next time.

Next to the Speicherstadt, a former cacao warehouse, Kaispeicher A, stands on a spit in the harbor, and has been transformed into the Elbphilharmonie, a visually striking concert hall.

Originally built between 1963 and 1966, the warehouse was totally gutted, with just the facade preserved, and rebuilt to create music classrooms, backstage areas, a parking garage, restaurants, and a giant curved escalator in a tube that leads up to a public plaza, above which perches a curvy/bulging glass building that doubles the warehouse’s height and houses the concert hall, plus a hotel and apartments.

The building was designed by architects Herzog & de Meuron, the Swiss firm that became world famous for the “Bird’s Nest” stadium at the 2008 Beijing Summer Olympics. It took over 10 years to complete, and cost over 10 times the original budget, so it hasn’t been without controversy, but now that it is complete, people seem to really enjoy the result. The building opened in January 2017, and most concerts there are still selling out well in advance of the show. You even need a ticket to walk around the plaza on top of the warehouse.

I’m just wishing that you could still catch a whiff of the warehouse’s past life on your way to the concert hall.

Unfortunately, while we know the baker’s name, the chocolatier’s name is lost in the mists of time.