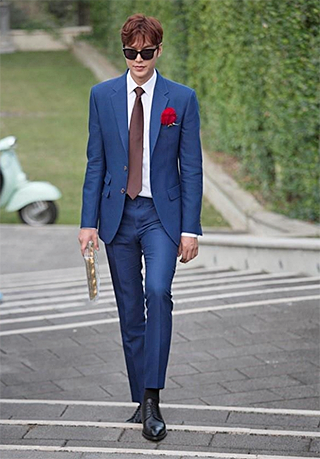 Lee Min Ho makes a good case for chocolates being the international language of love.

Today my life-long obsession with chocolate and my recent obsession with K-dramas collided when I read that Ferrero Rocher has hired Hallyu star Lee Min Ho as their spokesmodel.

According to Adrienne Stanley, contributing editor at KDramaStars, Lee Min Ho will star in Ferrero Rocher’s Christmas and Valentine’s Day commercials. The first ad in the “Italian Flair” campaign shows the popular actor preparing for a date in Rome that includes a box of chocolates.

Most chocolate lovers are probably already familiar with Ferrero-Rocher’s ubiquitous holiday commercials, if not with the chocolates themselves. And if you know who Lee Min Ho is, you probably can’t wait for the ads to air on a TV station near you. It’s not clear from the news reports however, if the ads are strictly for the Asian market or will air worldwide.

For those who don’t know who this Korean Wave actor is, I’d like to suggest a couple of his TV dramas as introduction: Faith, 2012, an action/supernatural thriller in which he plays a time-traveling warrior from 1300s Korea; and City Hunter, 2011, a revenge drama in which he plays an assassin-by-upbringing with an over-the-top wardrobe.