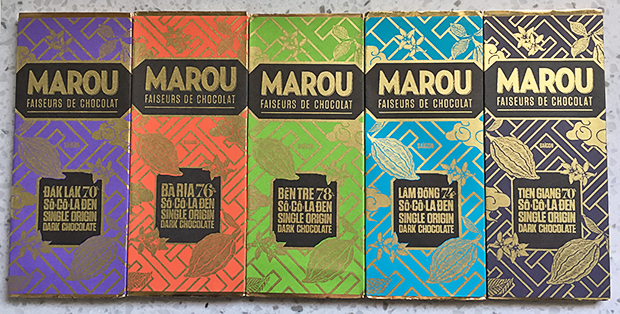 Marou, Faiseurs de Chocolat, is a Vietnamese bean-to-bar chocolate company based in Ho Chi Min City that works with small cacao farms across the country from the Mekong Delta to the mountains. Their bars were just named some of the best chocolate bars in the world by Britain’s The Telegraph. (SFBA’s Dandelion Chocolate was also included in their top 15 list.)

Coincidentally, I recently tried some Marou bars with a group of friends that included a Vietnamese American scientist who works for the USDA. He identified the areas the different bars were sourced from, and — bonus — he gave us an education in the physics of bar strength and flexibility.

Even the inner wrapper is special with the Marou logo seal

The large bars have a custom mold

The physics lesson came about because after oohing and aahing about Marou’s beautiful packaging (super gift-y), the next distinctive thing about the bars is how hard they are. They are definitely the snappiest bars I’ve ever experienced.

Hao, the scientist, used the terms MOE and MOR to describe the bars’ snap. “MOE stands for modulus of elasticity, and means, ‘is it flexible?’ ” he said. “MOR is modulus of rupture and measures how strong the piece is.”

He pronounced the first Marou bar we tried as: “high MOR and low MOE. Or… hard.”

All of the Marou bars we tried exhibited this same high MOR/low MOE characteristic: They are so hard that they shatter when you break them. Forget about breaking off a piece at a time.

The hardness also means they are very slow melting. You do have to work this chocolate around in your mouth before it melts. One taster commented, “The melt is missing.”

I have a hypothesis why these bars are so hard, and it has to do with making the chocolate in the place where it grows. I’ve tried 2 other bars made from Vietnamese beans before. The first Vietnamese chocolate I tried was a single-origin bar from Scharffen Berger when they were still in Berkeley. I liked it, but noted at the time that it was hard.

The second was a nameless bar a friend brought back from Vietnam. It was not hard, but it looked terrible because it had bloomed like crazy. Obviously, the makers had not tempered the chocolate enough to keep it from melting at room temperature.

Since Vietnam is a hot country, I think Marou puts an emphasis on tempering their chocolate to keep it from melting in the heat. Plus, I’d guess they use as little cocoa butter as possible to also minimize the threat of bloom.

If that’s their goal, it definitely works. Marou bars are glossy and very firm. They also smell delicious, so if you like dark chocolate, or need a nice gift for someone who does, check out Marou. 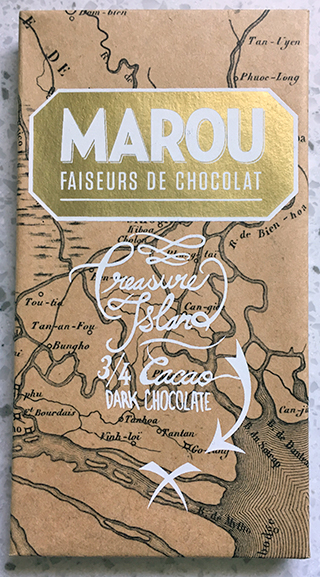 X marks the (supposed) spot where this bar is from

The first Marou bar we tried was their Treasure Island 75% cacao bar. The packaging described the source as “cacao beans grown on small family-owned farms on the remote island of Tan Phu Dong, stretching from the two northernmost arms of the Mekong Delta all the way into the sea.”

Hao was suspicious of this claim. As an agriculturalist and someone who’s been to the Mekong Delta many times, he didn’t believe there is any cacao growing there. He even showed us the Google Street View map of the island: “See! Nothing but fishing!”

I did some research, and it seems that Vietnam is developing their cacao industry, including in the Mekong Delta, so maybe next time Google updates their maps, we will see images of cacao plantations there. Or maybe next time he visits Vietnam, Hao will bring back photographic evidence of his own.

Whether or not the beans come from an island or not, the bar was a hit. Like all Marou bars, the packaging is beautiful, the bar looks and smells great, and it’s super brittle.

This was probably my favorite Marou bar. It has a deep, rich flavor, almost like strong coffee with a long-lasting aftertaste. It’s not bitter. And I think the Treasure Island packaging is fun. Chocolate as adventure! 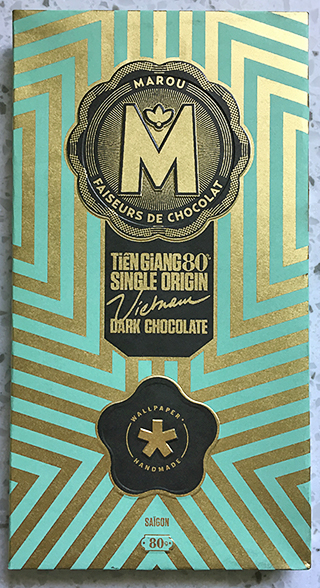 Art in the details

The other big bar we tried was the Tien Giang 80% Wallpaper Edition. The name was a bit of a head-scratcher, until I checked Marou’s website and found that it was made as a special edition for London’s Wallpaper* magazine.

Wallpaper* was publishing an issue that focused on unique handmade luxury items and wanted to include Marou. Marou reciprocated with a custom bar in a custom wrapper.

The special wrapper was designed by Rice Creative, and it’s hand printed and embossed in Vietnam. Like all Marou chocolates, the bar is hand wrapped in gold foil and finished with this beautiful handmade outer wrapper.

This bar was recommended to me by one of the baristas at Socola Chocolatier + Barista as their favorite Marou bar. I was leery about it because it’s an 80%, which is often too bitter for me, but I’m glad I gave it a chance.

Of course it looked and smelled good; and it was hard and fractured on impact. It was a little bitter; one of our tasters described it as sour. Another suggested it would be good with raisins to balance out the bitter/sour taste. And I though the aftertaste was dry and bitter.

Sounds like a no, right? But the texture was very smooth, and we found ourselves going back for second tastes. It’s a flavor that grows on you, we decided. It’s not a real fruity chocolate; it’s more on the spicy/earthy side. Marou’s site describes it as “high in spice, tobacco, and nutty flavours,” but I’ve eaten cigar-flavored chocolate before, and this was nothing like that (thank goodness).

We also tried a sampler pack of 5 smaller single-origin bars. I love the sample pack idea — it’s fun to compare flavors, and each bar is less of a commitment when you don’t have a clue as to which you will like best. But we did have a criticism of this pack: the bars are too thin. Marou chocolate in full-size bars already shatters, these break like glass into hard pointy shards. We would love thicker bars in the sampler pack.

Our favorite bar in the sampler pack: Ba Ria 76% bar

There were two 70% bars in our pack: the Tien Giang and the Dak Lak.

The Tien Giang 70%, like the Wallpaper* special edition, came from beans grown in the Mekong Delta. It had a slightly chalky texture. To me, it wasn’t strongly chocolate tasting, and it ended with a woody or earthy taste. It had a slightly ascerbic (like unripe persimmon) or metallic aftertaste.

Cacaopod liked it better: “There was nothing at first, but it finishes nicely with a slightly tangy, fruity flavor,” he said. “It makes me want to go back for more.”

I liked the Dak Lak 70% more. Hao said it’s from the central highlands of Vietnam where they grow coffee and tea. It had a richer chocolate taste, which was more satisfying.

Another bar from the central highlands was the Lam Dong 74%. This bar was especially mentioned in The Telegraph article, but I’m not sure why (I think the Treasure Island bar is the one to promote). This was a basic chocolate bar to us; not bad, but no wow.

The bar we liked best in the sampler pack was the Ba Ria 76%. Ba Ria is a city on ocean in southeast Vietnam. It’s more fruity than other Marou bars and not bitter. Our other tasters said it was more complex, with a wider range of flavors than the other bars.

The last bar in the pack was the Ben Tre 78%, another bar sourced from the Mekong Delta. It had the good, strong chocolate smell I now associate with Marou. The bar was a little bitter/acidic, not unexpected for a 78%, with raisin overtones and a nice aftertaste.

I bought the Marou bars at Socola Chocolatier + Barista, but Marou bars are available worldwide. Locally, you can find them at Chocolate Covered, Draeger’s, Market Hall Produce, and other local foodie destinations. Check their website for other locations.