There are so many studies on the beneficial effects of chocolate, I can’t keep up. And so many products that claim they provide these beneficial effects, I can’t try them all. Some stories I dismiss quickly, others I wish were true (chocolate cough syrup sure sounds tastier than traditional cough syrup), and some look like they might actually show real health benefits from eating my favorite food. Here are 2 of my current favorite chocolate-health — or Vitamin Ch — stories, taken with a grain of salt:

A study was done in 2016 to see if chocolate would enhance athletic performance like beet juice apparently does. Both increase the production of nitric oxide in the body, which reduces oxygen consumption and helps athletes maintain their pace longer.

Tests showed that after eating dark chocolate for 2 weeks, the riders used less oxygen when cycling at a moderate pace, and were able to cycle farther in flat-out time trials. Rishikesh is now studying dark chocolate further in his doctoral thesis to determine optimal levels of flavanols in it for boosting athletic performance and endurance.

James, who is an ultra-distance runner, said that their research suggests dark chocolate could be beneficial to endurance athletes in the same way beet juice is, but with a better taste. And, I may add, easier to clean up if spilled on clothes.

I especially like that the test didn’t require consuming chocolate before exercising. Instead, the participants ate it daily to see the benefits. Instead of ‘an apple a day keeps the doctor away,’ we might start saying ‘a chocolate a day keeps us exercising away.’ 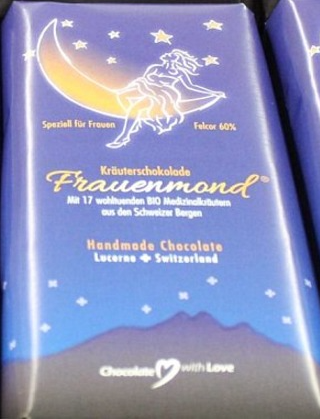 Frauenmond bars promise to make you feel over the moon. (Image: Chocolate With Love)

As a member of the half of the world’s population that has suffered through the monthly reminder of her gender, the idea that there’s a chocolate formulated to relieve menstrual symptoms sounds like a gangbuster idea. A Swiss chocolatier got the idea after seeing his former partner suffer strong abdominal pain every cycle.

It took Marc Widmer 3 years to formulate the 60% chocolate’s 17-herb combination in his Frauenmond (women’s moon) bar. He worked with an aroma- and phytotherapist to get the optimal mixture to relieve PMS.

I’m not sure where you can buy Frauenmond bars. Articles about them state they cost $12-$13 for a good-sized 100-gram bar, making them a premium chocolate bar. But the bars are not for sale on Marc’s website, Chocolate with Love, and there is no list of retailers.

I also couldn’t find any studies done to prove his concept. On his website, there is an article in which 3 women and 1 man were asked their opinions on it. I got to use my rusty German skills to decipher their comments. Basically, they were unimpressed.

The women said it tasted very good, but didn’t think it did anything special for them. In the end, ‘it’s just entirely normal chocolate (ganz normale Schokolade),’ according to one of them. And the guy said it didn’t do anything for him, but he would be happy if there really was a chocolate that calms women down.

I bet he got some side-eye for that comment.