Continuing our series of “I can’t believe what somebody thought of to put in chocolate” (British edition), Chocolate Tree just announced that their Haggis Spice Chocolate Bar is a semifinalist in the Great British Spiced Chocolate Challenge (GBSCC).

Yup, that’s right. Alastair & Friederike Gower of Chocolate Tree, Edinburgh, Scotland’s only bean-to-bar maker, produce a chocolate bar that includes all the common ingredients in haggis, that traditional Scottish dish of sheep liver, heart & lung, cooked with oatmeal & spices in the sheep’s stomach — minus the minced offal and intestine casing. (Does that make it vegan haggis?) 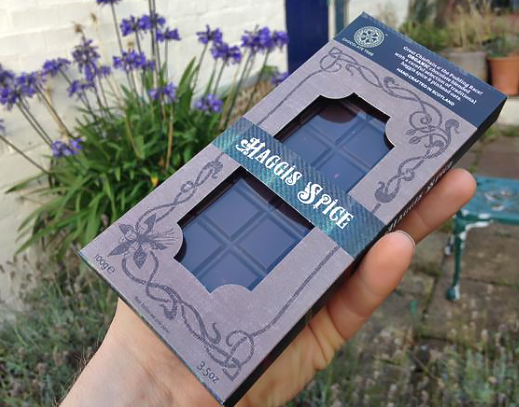 Somehow I missed this bar before, but it won an International Chocolate Award in 2013, and is now receiving recognition in the GBSCC.

According to the GBSCC website, the Great British Spiced Chocolate Challenge is in its 2nd year and features “over 100 professional and amateur chocolatiers competing alongside each other to create a new spiced chocolate.”

Preliminary judging was on Sept. 3, with the final challenge taking place during National Chocolate Week, Oct. 12-18, 2015. The winning chocolatier will receive a 7-day trip to Grenada (a producer of spices and chocolate) plus their chocolate “will be fast-tracked into a top London food hall in time for Christmas 2015!”

If the contest is for a new bar, and Haggis Spice has been around a while, it seems like they need to change things up a bit. My suggestion: Since haggis is typically consumed with a glass of Scotch, maybe they should add whiskey to the bar? Might make the bar more approachable for the haggis-averse crowd.

[Previous entries in the “What are they thinking?” (British edition) include the Francis Bacon-themed chocolate with no bacon, but including edible charcoal, hay-flavored chocolate, and Truffle Sprouts (chocolates made with Brussels sprouts).]