Doing a blog about artisan chocolate for over a decade has some great perks. Number 1 might be that people tend to give me chocolate as a gift. Not only do I love chocolate, but since it is edible, it doesn’t clutter my house like, for example, my mother’s collection of hippo-themed gifts, which she acquired over decades and which she is loathe to part with for sentimental reasons.

I never have to dust chocolate

Chocolate, on the other hand, is meant to be eaten and cherished in the moment, not forever gathering dust and taking up precious space in my little house. For the gifter too, I think it’s a good deal — appropriate for all occasions; available in a wide variety of price ranges, flavors, and flavor combinations; and usually comes in its own attractive packaging, so no wrapping needed on their part.

All in all, an excellent gift, I’m sure you will agree.

Last month, an unexpected gift arrived for cacaopod and me: 8 bars from K’ul Chocolate in  Bellingham, WA, a craft chocolate company we hadn’t heard of before. (We also didn’t know at first who the gift was from because there was no card or note enclosed, so there was an added element of mystery.) 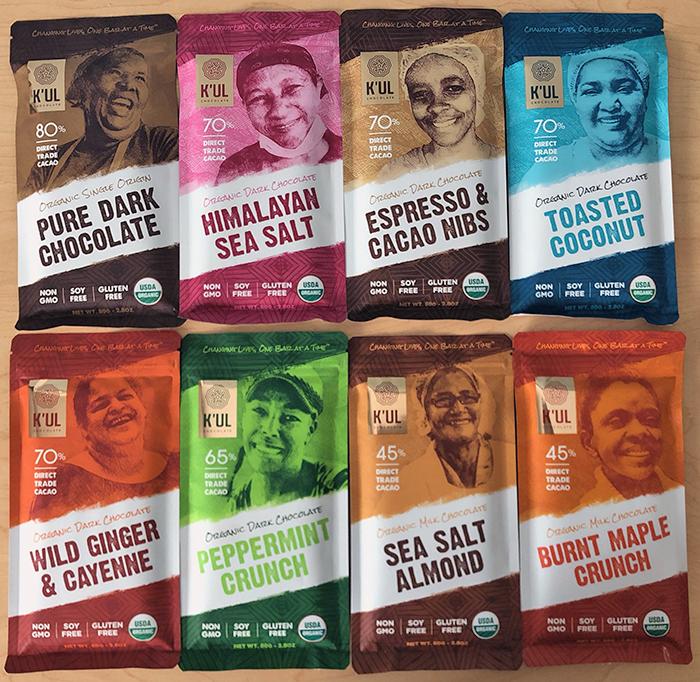 Formerly BIJA Chocolates, K’ul Chocolate is an American company that focuses on empowering women in chocolate growing areas by working with local women’s cooperatives to help them receive and maintain organic certification for their cacao, so they can make more money selling their cacao. K’ul also sources their cacao directly from women’s coops in the Dominican Republic and Peru.

Their chocolate is all organic, gluten-free, and non-GMO, with no emulsifiers, preservatives, or soy. Ingredient lists are minimal: organic cacao, cane sugar, and cocoa butter, plus any inclusions.

The package of 8 bars covered K’ul’s entire line of chocolate, ranging from 45% milk chocolate to 80% dark. The 80% was straight up chocolate with only the 3 main ingredients; the rest were inclusion bars that started from the 3 ingredients and only added ingredients for flavor.

K’ul’s bright dynamic packaging is very attractive and enticing. The bars themselves were well made with a smooth mouthfeel: and while I thought they were all good, I definitely had favorites that I can recommend.

The bars are in resealable packages which is a very nice touch, keeping the chocolate fresh and preventing flavor contamination. This was a good idea because some of the inclusions are very subtle and could have been lost. My only complaint was that the package opening was a little too narrow to slide the bar out, so it was hard to get a bar out whole to take a nice picture of it. 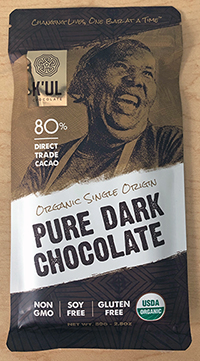 Wherever they sourced this one from, they made a good choice because it worked well at the high cacao percentage

I was also surprised that there is no country of origin listed on the packaging. I could tell from the difference in taste that the chocolate is not all from the same place, but I think it would be nice to know where the chocolate is sourced from for each bar.

My favorite bars were all on the darker side. Their darkest bar, the 3-ingredient 80% Pure Dark Chocolate had a good snap and smooth texture. It took a while to melt and was a little bitter, but not overly so considering its high cacao percentage. It was a good fruity chocolate with nutty overtones, and had a drying sensation at the end, but good overall.

The package said it has flavor notes of dark cherry and blackberry. I didn’t get that, but I appreciate the tasting assist. This is one I recommend if you like higher percentage cacao.

The 70% Espresso & Cacao Nibs, as the name implies, adds organic cacao nibs and espresso beans to the 3 main ingredients. From the start of opening the package, it was a good bar with a very chocolatey aroma. Like the 80%, it had a good snap.

While I didn’t taste the espresso per se, it did make the bar taste a little darker and more chocolatey. It had an overall stone fruit flavor with a little tang. Again, I wish I know country of origin. The nibs were very finely ground and there were not enough of them for me. I still liked the bar and recommend it, but I think it would be better with more nibs. 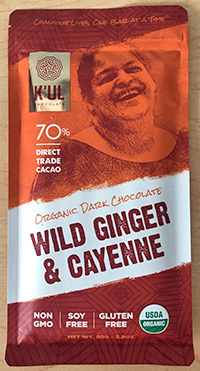 The 70% Wild Ginger & Cayenne was one of 2 bars by K’ul that were very assertive flavor wise. The organic ginger powder and cayenne pepper inclusions really made their presence known, starting from opening the package: The ginger and chocolate smells jumped right out.

I love ginger, so that was a plus to me before I even tasted the bar. The ginger flavor came first; the heat came later, but built quickly.  The cayenne wasn’t a flavor to me, but added to the ginger heat, creating a hot, but not too hot, bar with good ginger heat. And the bitter chocolate worked really well with the heat. I think it’s my fav spicy chocolate bar now.

The other flavor blast bar was the 65% Peppermint Crunch. This one had the most extensive ingredient list including chocolate cookie pieces made of raw almond butter, eggs, cacao powder, baking soda, vanilla extract, sugar, and vanilla bean extractives, plus pure but not organic peppermint oil.

It had a minty smell right out of the pack, and was very crunchy from the chocolate cookie pieces. It’s not a melt-in-your-mouth chocolate. Even after crunching through the cookie bits, the chocolate took a while to melt. It had a good mint flavor, but all those cookie bits made the texture dry. I think it’s more of a candy bar than a chocolate bar with its dry crunchiness. 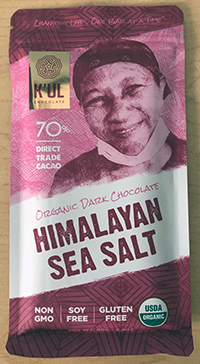 The 70% Himalayan Sea Salt added only one ingredient (guess!) to their 3-ingredient base, and it’s a welcome addition. This is a good bar, smooth texture, nice snap, with a good chocolate smell and a very  fruity, raisiny taste. But it’s the salt that makes it.

The salt popped up at different intervals as the chocolate melted, so there were these constant changes in taste; fruity, almost fermented chocolate, then a hit of salt, which receded quickly to another round of chocolate vs. salt. Delightful, tasty, recommended.

The 2 milk chocolate bars had good chocolate flavors, but their inclusions were not strong enough for my tastes.

The 45% Burnt Maple Crunch included both maple sugar and maple extract, but it still wasn’t maple-y enough. It was sweet with a crunchy sugar texture and a slight maple taste at first. But that hint of maple disappeared quickly and turned in a milky — as in milk powder — taste with banana notes. It wasn’t bad, just not maple enough to merit the name.

Maybe if it was a dark chocolate, the maple flavor would stand out, but as it was, it mostly registered as a sugar-crunch, sweet milk chocolate bar.

The 45% Sea Salt Almond made with toasted almonds and Himalayan sea salt was a reddish brown color with a very soft break. It had a slightly crunchy texture and almond flavor from finely chopped almonds, but nothing to bite into, due to how finely the nuts were chopped. The salt came last and lingered more than the almond flavor. It was not a bad bar, but I prefer bigger pieces of nuts and a bigger nut flavor in bars like these. 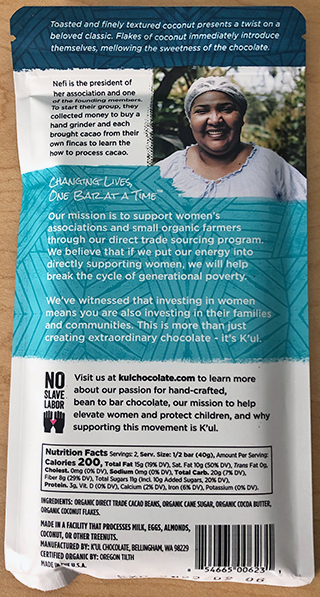 Each bar’s wrapper includes information about the chocolate, the woman featured, K’ul’s mission, and finally the usual chocolate bar info

The only bar I was disappointed in was the 70% Toasted Coconut. It didn’t have a yummy smell like the other bars. The only added ingredient was coconut flakes, but it was not very coconut-y. Maybe this one needed a sweeter chocolate because the chocolate was bitter, and the coconut was a texture, not a taste. If I hadn’t seen the package, I would have only guessed it was coconut by the texture. I don’t know if I got a bad bar, but it was disappointing because I usually like coconut/chocolate combos.

While I love chocolate, there are some reasons it can be problematic, such as child labor, even slave labor, on large commercial plantations in Africa, damaging agricultural practices, and chronic financial abuse of cacao farmers all over the world. So it’s always nice to find socially responsible chocolate, and especially nice when it’s good too.

K’ul has been doing socially responsible chocolate for a while now, starting in 2016. And not only do they source their cacao in a mindful way, they focus on helping women’s cooperatives get organic certification (which can be difficult and too expensive for small cacao farmers) and find buyers willing to pay higher amounts for their organic cacao. Currently, K’ul is working with 2 coops, but has a goal of supporting 24 women’s organic cacao cooperatives around the world by 2025.

If such a world interests you, you can help them by buying their chocolate for yourself and your chocolate-loving family and friends. I think we can all appreciate that.