Barry Callebaut, the Swiss chocolate manufacturer, announced a fourth type of chocolate in fall 2017, Ruby, which they said was chocolate, but not white, milk, or dark. Instead, it’s a naturally pink chocolate they spent 13 years developing from special cocoa beans grown in Africa and South America. If truly chocolate, it’s the first new chocolate since Nestlé introduced white chocolate about 80 years ago.

Very exciting/intriguing news to me until it was announced that the first product available would be Ruby KitKats in Japan in January 2018. As someone who writes a blog about artisan chocolate, this was disappointing. Although it might have been appropriate since Japanese KitKats are known for flavor innovations with over 350 flavors, from the predictable (Matcha Green Tea, Wasabi) to the unusual (Sweet Potato, Soy Sauce) to the truly weird (Cough Drop?).

Instead of ordering Ruby KitKats from Japan, I wanted to try simple, straight-up ruby chocolate, so I waited as Ruby spread across Asia, and a spring 2018 roll-out in the UK was announced. In March 2018, Callebaut announced that Ruby would be made available to artisan chocolatiers in Belgium.

What luck! I just happened to be going to Belgium in May 2018! But it turned out to just be hype; ruby chocolate was nowhere to be found when I spent a day visiting Belgian chocolate shops. In fact, I couldn’t find ruby chocolate anywhere on our European travels that May. Not even a single Ruby KitKat.

In the meantime, there has been a lot of controversy about Ruby. Questions about whether it is truly unique enough to be considered a fourth chocolate, and even if it could be considered chocolate at all. Callebaut has been pretty mum about Ruby’s details, so it’s hard to know the truth. And they delayed Ruby’s rollout in the US because the FDA told them they could not call it chocolate. 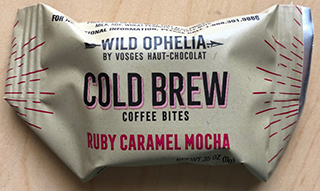 As I understand it, Callebaut got a temporary permit in the fall for Ruby, and it was finally available in November 2018 in truffles from Chicago’s Vosges Haut-Chocolat. We got a sample of their Wild Orphelia brand Ruby Caramel Mocha Coffee Bites recently, which I will get to later, but I still wanted to start with a plain piece of ruby chocolate to compare it to the other types of chocolate. 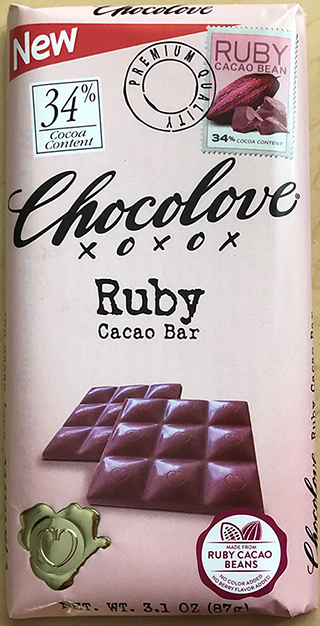 Not ruby chocolate, but ruby cacao

Enter Chocolove. In January 2019, SFBA chocolatier NeoCocoa posted a pic on social media of Chocolove’s Ruby Chocolate bar at the Fancy Food Show in SF. Finally! A ruby chocolate bar I could try. Chocolove is not local — they are based in Colorado — and not artisan chocolate makers, but they were making a simple ruby chocolate bar.

So I ordered some from Chocolove, but never got an acknowledgement of my order. Weird, then I didn’t get my bars, but I got charged for them on my credit card. A round of emails and phone calls with Chocolove revealed that my order and 3 other people’s orders the same day had resulted in charges but no actual orders placed. Ruby remained elusive.

So I tried again. Finally, the second week of March 2019 — a whole year after I expected ruby chocolate to be widely available, my bars arrived.

You say chocolate, I say cacao

When we opened the box, the first thing we noticed was that it is not labeled ruby chocolate, but ruby cacao. This is what I think they had to do to comply with the FDA, and I think it was a good call.

Opening a bar, we noticed the color is not exactly pink as we expected, but more of a grayish, purplish pink, the result of it being its natural color, not enhanced by coloring or additives. Cacaopod said that he had read that ruby chocolate is not suitable for baking because it turns gray when baked. So the pinkish color is not stable when exposed to extreme heat.

The bar had a smooth texture, similar to white chocolate, and to me, the taste brought back a memory from early childhood. When visiting our grandparents, my older siblings would take me to the corner store where we would get raspberry ice cream bars. As we ate the bars, a cut-out character would slowly be revealed on the hidden end of the bar’s sticks. Although I can no longer remember what characters were hidden in the ice cream, Chocolove’s ruby cacao bar tastes just like I remember that melting raspberry ice cream tasting.

Cacaopod said it didn’t taste like raspberry, but more like a general berry and milk flavor, and not as bright as white chocolate. It did have a pronounced tang that lasted a long time. And a buttery aftertaste.

While the taste was disappointing, it was reinforced by information on the wrapper. The wrapper said it was 34% cacao content, and the ingredients list started with sugar, cocoa butter, and milk, so it’s definitely a white or milk chocolate type of bar. (Cocoa liquor is the 4th ingredient, followed by soy lecithin, citric acid, and vanilla.)

I would not call ruby cacao chocolate. Chocolate is a unique pleasure, even if it has lots of different overtones, undertones, textures, and aftertastes, depending on where the beans are from and how they are prepared. Some people say ruby chocolate is just unfermented chocolate because fermentation is what gives chocolate its characteristic flavor.

Ruby cacao does not have any of that chocolate pleasure for me. We decided it should be called a confection, it’s definitely a candy of some sort, just not a chocolate candy. AMMA’s Theobroma Grandiflorum Cupuassu 80% bar that we tried in Amsterdam last year, which is made from a close relative of cacao, tasted more like chocolate than ruby cacao does.

Its only plus, Cacaopod said is the berry flavor. Otherwise, it’s a bit dull and heavy.

What’s in a name?

Since ruby cacao is a new thing, we decided to share it with a bunch of other people to get their reactions. Our first tasters found it extremely tangy. One will never try it again; the other said that while she agreed with us that it wasn’t chocolate, she predicted she would eventually eat the whole bar.

They also gave us a better word to describe the color of the bar: “Mauve.” We were happy to find a new use for an old word. And it’s certainly much more accurate than “Ruby.”

Our next group of tasters described the bars as shiny with a chocolate texture but too sweet, and tasting milky, lemony, and like flavored white chocolate or strawberry milk. They agreed with one person’s statement that “it melts like chocolate, but tastes like candy.”

“I’m kinda missing the chocolate,” said another person. “[Ruby] leaves you wanting something else.”

Their verdict was that ruby cacao is not satisfying like chocolate, and they suggested that it needs something, like almonds, to improve the experience. 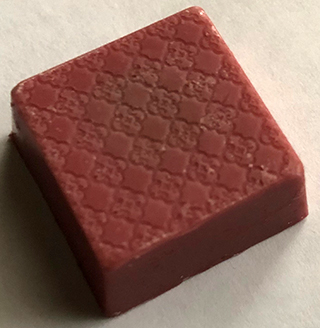 Ruby Cold Brew Coffee Bites are darker than solid ruby cacao bars, I assume due to the coffee caramel inside

Be careful what you wish for

On that note, we tried a ruby cacao+ confection: Vosges’ Ruby Caramel Mocha Chocolate Coffee Bites, part of their Wild Orphelia Cold Brew line of chocolate-covered coffee caramels. In fact, we tried the whole line of bite-size squares from white to dark, but were not wowed. Thick chocolate shells surround sticky coffee-flavored caramel, but the coffee flavor was weak and reminded me of old-school coffee candy, and overall the line is too sweet.

The ruby cacao added some tang and sweetness, but tang added to coffee was not a desirable taste combo, pushing it toward bitter and isn’t one of the points of cold brew is so it’s not bitter? IF you are interested in the bites, I’d suggest the white chocolate version, if you like sweetened coffee, or better yet, the Jet Black which covers the coffee caramel with a nice 70% chocolate. 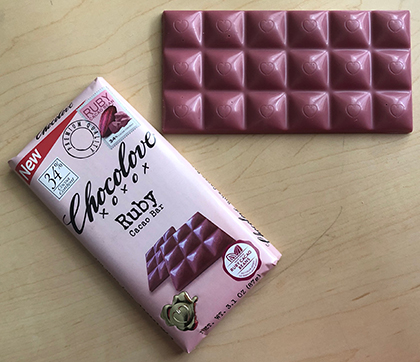 Add some sparkles to the package, and I think you’ve got the next trendy gift for the 10 and under set

While we didn’t share the Coffee Bites, we did continue to share the Chocolove bars to get reactions. These later groups of tasters were more favorable than our initial ones, and unless they were dark-chocolate-or-nothing types, tended to like it, describing the flavors as raspberry, strawberry, or white chocolate. But there was a sizable percentage of people who also said it was too sweet and didn’t taste like chocolate.

The only group that was reliably pro-Ruby were girls 10 and under. “I love pink!” was their starting position, and none of them had any criticism. No nuance in that crowd, “I like it!” and “I love it” were all the description I got in their reactions. I think I’ve found Ruby’s market.