Cacaopod & I just got back from a trip to Pittsburgh, PA. We went for a wedding, then spent a few days exploring the area. Pittsburgh has a time-warp vibe to it, ranging from the great (cool old architecture & signage) to the annoying (most everything closes down on Mondays) to the sad: There is no indigenous artisan chocolate scene in the ’Burgh.

Lots of history, but is it any good?

You can get artisan chocolate, but it’s all imported. The local chocolate culture has deep, milky roots — started by Greek immigrants over 100 years ago who brought their chocolate-making skills and love for Nestlé milk chocolate with them. This end of the spectrum is well represented by longtime candy makers such as Edward Marc Chocolatier,  Daffin’s Candies and Betsy Ann Chocolates; but the mother of them all has to be Sarris Candies. 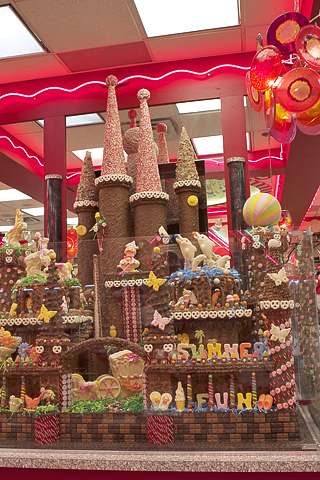 A chocolate & candy castle for the kid in you.

Sarris is ubiquitous in the Pittsburgh area, from its delivery trucks to its endcaps in the local drugstores to its displays in the airport — for that last-minute souvenir. As it’s mostly milk chocolate and uses ingredients like partially hydrogenated oils in its chocolate covered pretzels (which are their biggest sellers), we weren’t interested in sampling, but we had to visit their only store to see their chocolate attraction: a 1,500-lb. castle.

The store is at their main factory in Canonsburg, PA (also notable for being the birthplace of crooners Perry Como & Bobby Vinton), about a 30-minute ride from Pittsburgh. They don’t offer factory tours (as I understand it, the factory has grown organically over time, so it’s a bit of a hodgepodge with different machines scattered around several buildings, not really conducive to touring). But they have an ice cream parlour (they make their own ice cream) and lots of candy — not only chocolates, but nostalgic stuff like Turkish Taffy and Now & Later.

I think this place qualifies as kid-heaven, and lots of adults probably love it too. In our short visit (on a Monday midday), we saw a steady stream of customers. Sarris looks solidly successful. But if you’re looking for quality dark chocolate, you are out of luck.

They seem to be trying to address the dark chocolate audience with a few bars listing their cocoa content prominently. However, it’s like eating the chocolate chips for Toll House Cookies straight from the bag. Yeah, it’s chocolate, but only if you’re desperate.

The castle sure is cute though.

A world of chocolate

Pittsburgh is not a gourmet chocolate desert, in spite of its dearth of artisan chocolatiers. Since 2002, Mon Aimee Chocolat has been importing quality chocolate from around the world, including SFBA.

A world of chocolate awaits you in Pittsburgh. How many SFBA brands can you spot? 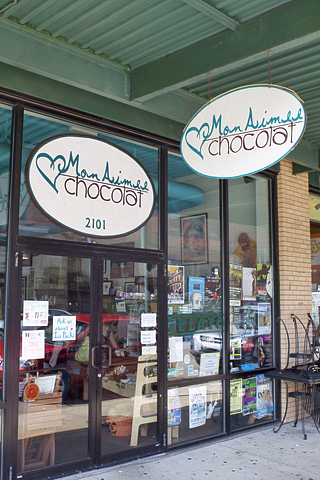 A neighborhood place that stocks a world of chocolate.

Amy Rosenfield, the owner, confirmed for us what our Google research hinted at: Nobody in Pittsburgh is currently creating artisan chocolates. But she’s doing her bit for the cause and bringing quality chocolates to the ’Burgh. From SFBA alone, she currently carries Recchiuti

Amy is a leader in the local slow food movement, and so is very interested in local sourcing. But the only local item she currently carries is maple syrup.

The only Pennsylvania chocolate she carries now is Asher’s, another old-school chocolate maker (est. 1892), but from Philadelphia. She is always looking for local chocolatiers, so maybe next time we’re in town she’ll have good news on that front.

In the meantime, you can enjoy her hot chocolate (featured on AOL’s when.com) or gelato (made with fresh local fruit), depending on the season. Pittsburgh’s seasons are more extreme than ours in SFBA, so Amy’s chocolate candy offerings are also somewhat seasonal. For example, she carries SFBA local Neo Cocoa truffles, but only in the cool weather since they don’t have a shell and wouldn’t survive a Pittsburgh summer.