Back in the 70s, I had a pen pal, Eddie Kisalita, from Uganda. While the concept of pen pals now seems quaint; before email and social media, they were pretty commonplace — a way to make friends in faraway places and learn about other cultures while sharing your own.

What was maybe more unusual was me having one in Uganda. Uganda in the 70s was a scary place. Idi Amin had overthrown the government in a military coup, and while at first he was friendly with Western nations, he was a ruthless dictator who terrorized his own people and killed hundreds of thousands.

But when I first started corresponding with Eddie, I knew nothing of that. His friend was an exchange student at my school in the early 70s and set up a bunch of pen pal partners between his Ugandan friends and my classmates.

We exchanged happy letters for a couple of years, until I started paying attention to the news anytime I heard them talk about Uganda. People from all walks of life there were being killed by the government, and it seemed no one was safe.

What I didn’t realize was that mail was monitored and censored in Uganda. And when I wrote a letter asking Eddie if he was OK after some fresh round of atrocities, he wrote back a stern letter telling me not to write about anything political. We stopped corresponding soon after that. I was scared that I might cause him trouble with something I wrote, and he didn’t pursue the matter.

Nowadays, Idi Amin is long gone, and Uganda is calmer, but it’s still a place of considerable unrest, deadly conflict, and human rights abuses. The most high profile one of those to Westerners is probably the Anti-Homosexuality Bill, which if it hadn’t been stopped by the courts would have condemned gay Ugandans to life in prison (original bill sentenced them to death). At this rate, Uganda may never get onto my bucket list for travel.

So I was totally surprised at TasteTV’s 2017 Chocolate Bar Awards that one of the bean-to-bar makers entered a 70% cacao bar made from Ugandan beans. I had no idea that Uganda had cacao plantations, but it makes sense because it is an Equatorial country, sandwiched in the middle of Africa between Kenya, South Sudan, Democratic Republic of Congo, and Tanzania, with a long shoreline on Lake Victoria. Cacao is grown there primarily in the north and west of this dinosaur-head shaped, landlocked country.

Because of Eddie, I wanted to love the bar, but the texture was too soft, the bar was too thin, and it tasted musty — like the beans had mildewed. Very disappointing.

Lucky for me though, I mentioned the bar and my disappointment to Jack at Chocolate Covered, and he hooked me up with a Ugandan bar done right. 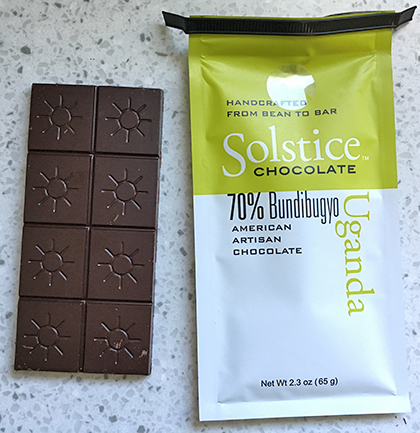 I have no idea what the conditions are for cacao farmers in Uganda. The packaging and website make no mention of fair trade, sustainable sourcing, ethical farming, etc. I have not heard of any child/slave labor used on cacao plantations in Uganda (unlike plantations on the western coast of Africa). The package does say the bars are gluten free, soy free, vegan, organic, and kosher.

The package describes the chocolate taste as “subtle bitterness of cocoa powder, resulting in a chocolate with fresh, earthy hints of berries and tree fruit.”

I found the Bundibugyo bar to be a slightly soft, creamy chocolate, with a subtle nutty taste. The after taste was reminiscent of hot chocolate. As one of my fellow tasters said, “It grows on you.”

I think this would be a good option for taste testing bean to bar. Contrasting it with single-origin bars from other countries/continents would really point up its more savory, less fruity overtones.

And you could easily create your round-the-world bean-to-bar taste test by picking up whatever strikes your fancy at Chocolate Covered, which carries over 1,000 bars from all over the globe. If you aren’t sure what to try, ask the staff for recommendations.

After all, that’s how I found a good bar from a place I’ve never visited but still kinda miss.