I enjoyed judging this year’s Top Artisan Toffee Awards (sponsored by TasteTV). There was a higher level of entries this time, so I got to be very picky. And based on the final ratings, it looks like the other judges were too.

There was only one SFBA entrant this year, but a good one: Tomo Toffee, San Ramon, CA, entered their classic Dark Chocolate Toffee again this year and a new toffee that I liked a lot, and so did the other judges it seems.

Tomo makes what I consider a classic toffee, not too thick, and coated with chopped nuts. Their toffees also contain a lots of nuts inside too, so nut flavors usually dominate, which I prefer. Plus their toffees are generally less sweet, and they use good chocolate. I am always excited to see them in the competitions.

Their classic Dark Chocolate Toffee with almonds and pecans was very toasty, almost burnt, tasting with a good crunch. It was awarded Silver for Best Taste, Bronze for Best Texture, and an Honorable Mention for Top Toffee; and rated 4.5 stars. 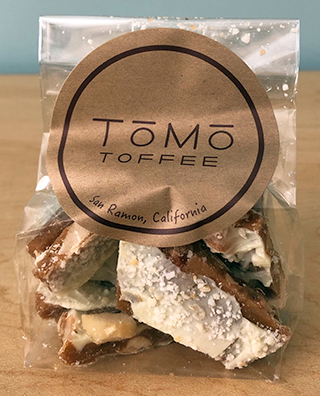 The White Chocolate Macadamia Nut Toffee was really interesting: Of course as a Tomo toffee, it had lots of nuts, and they were big pieces of toasted nuts, so you can taste them amid all the other flavors. I think Tomo knows that it’s important with mild nuts like macadamia to toast them and have enough of them for the toffee to taste like the nut listed in the ingredients.

The toffee also was sprinkled with coconut, so it had a mild coconut flavor and a bit of a coconut texture, which was a fun change from most toffees.

Perhaps most unusual was that the toffee tasted a little like marshmallows, which I assume is because of the white chocolate couverture they used or maybe some secret in their process of making the toffee. At the same time the toffee was not too sweet. I am always leery of white chocolate, but this was a good white chocolate.

The toffee had a good crunch and was one of my favs in the competition. It was awarded Gold for Most Unique and Top Toffee; Bronze for Best Ingredient Combinations and Best Texture; and Honorable Mention for Best Taste. It rated 4 stars.

New competitor, The Toffee Merchant, Phoenix, AZ, makes amazing toffee, based on what they entered this year. They know what makes good toffee: Generous chunks of crunchy toffee with wonderful flavors. They snapped up a bunch of awards at the competition, and received high ratings too. 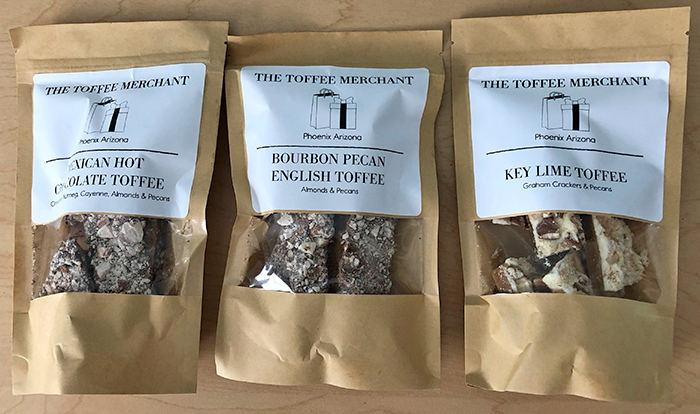 Their Bourbon Pecan English Toffee was so good: Good crunch, good roasted nut flavor, good chocolate, good balance among all the flavors. It had a nice distinct, bourbon flavor that tasted of molasses. I loved it, and so did others: It was awarded Gold for Best Ingredient Combinations and Top Toffee; Bronze for Best Taste and Best Texture; and Honorable Mention for Most Unique. It was the highest rated toffee this year: 5 stars.

I also liked their Mexican Hot Chocolate Toffee, which not only smelled like cinnamon and nutmeg, it tasted like it too. Like the Bourbon Pecan English Toffee, it had a good toffee crunch, well-balanced quality ingredients, and wasn’t too sweet. And it came with the surprise of a little heat at the end from cayenne, not too much, very well done. It was awarded Gold for Best Taste; Silver for Best Ingredient Combinations and Most Unique; and Bronze for Top Toffee; and was rated 4.5 stars.

Their third entry, Key Lime Toffee, also did very well in the competition, although I didn’t like it as much as their other too entries. It smelled like key lime pie and had a distinct key lime flavor, plus a graham cracker flavor. I gave it points for its successful uniqueness and distinct taste, but it wasn’t nutty enough for me. In fact, I might just ditch the pecans since they seemed extraneous to the piece. I also thought the white chocolate tasted a little soapy. But it still had a good crunchy texture with thick layers of toffee and white chocolate. It was awarded Gold for Most Unique, and Honorable Mentions for Best Taste and Top Toffee. It rated 3.5 stars. 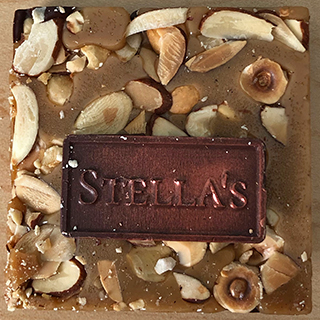 Gift with every package

Another new contestant that I liked a lot was Stella’s Confectionery, Milwaukee, WI. They make attractive 4″-square bars crammed with nuts on both the chocolate and brittle sides. A small chocolate bar, decorated with copper luster dust and the name “Stella’s” embossed on, sat on the back of each bar. Simple clear sleeve packaging showcased the bars.

My favorite was her Almond Hazelnut Toffee. It had a good dark chocolate flavor, and was generally nutty tasting. Strangely, with all those big pieces of nuts, they didn’t taste distinctively like what they were. Still, it had a good taste, good crunchy texture, and a good balance between the chocolate, brittle, and nuts. It was awarded Bronze for Top Toffee; and Honorable Mentions for Best Ingredient Combinations and Best Texture; and rated 4 stars.

The Butter Pecan Toffee was almost as good. This one had a distinct pecan taste and was a good crunchy toffee. My only quibble is that I wish it were dark. The milk chocolate was  a little too sweet for me. It was awarded Honorable Mentions for Best Texture and Top Toffee; and rated 4 stars. 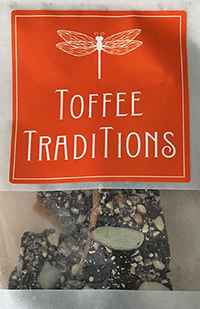 Sliced almonds were an eye-catching addition

Toffee Traditions, IL, is aptly named for what they make. Their Traditional Toffee was a good, traditional toffee, made more attractive with some sliced almonds mixed with the chopped, salted pecans and almonds on the toffee.

When I opened the package, I was met with a delicious chocolate smell — always a good sign. The thin toffee  was very buttery, with a small crunch. I was surprised it didn’t garner a single award; but it did rate 3.5 stars.

I must admit, I found Toffee Traditions very mysterious. Their packaging was attractive but with minimal information — just an ingredient list. Their website is equally mysterious with no company info. I only figured out they were Chicago, IL area by their phone number’s area code. But their toffee was legit. 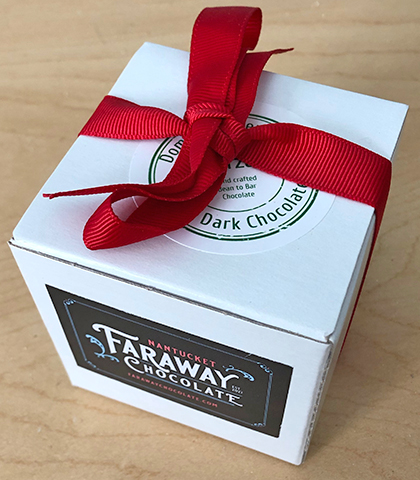 The other new entrant I was impressed with was Nantucket Faraway Chocolate, MA, and their Dark Chocolate Almond Toffee. According to the packaging, they used single origin Dominican Republic cacao to make the 75% chocolate they used for their toffee (bean to bar is unusual for toffee makers).

The ingredients list also had a surprising entry: In addition to the chocolate, almond, and salt — coffee. Maybe in Nantucket, you don’t make toffee without coffee, but most toffee I’ve seen that includes coffee says so in the name.

I didn’t read the ingredients list first, so I was surprised when I tasted a strong coffee flavor immediately. It was so strong that it was almost burnt tasting. I don’t mean to imply this wasn’t good toffee. It’s not nutty, but it has its good points: coffee is the strongest flavor, then buttery brittle, then good dark chocolate. Maybe if they toasted the almonds, it would be nuttier, but I liked it overall. It was awarded Honorable Mention for Best Texture and Top Toffee; and rated 4 stars. 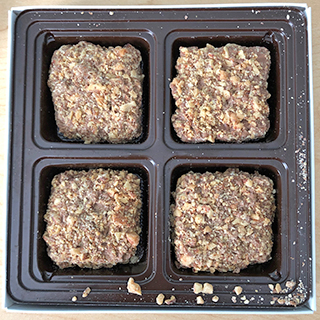 DGZ Chocolates, Houston, TX, first submitted their Toffarazzi toffee in last year’s competition where it did very well. Their generous squares of milk chocolate covered toffee rolled in chopped nuts is excellent — if you like milk chocolate.

I prefer dark chocolate, but I do like Toffarazzi because it’s a good, nutty, crunchy toffee. It was  awarded Gold for Best Texture, Silver for Top Toffee, and an Honorable Mention for Best Taste; and rated 4.5 stars.

Moser Roth also submitted this entry in last year’s chocolate bar competition, so I was already familiar with it. It’s a little sweet for me, but acceptable with small crunchy bits sprinkled lightly through the milk chocolate. A satisfying treat that kids would love, it rated 3 stars.

There were lots more entries in the 2021 toffee competition, but these were the ones I liked best. You can see the complete list of winners and judges’ comments about some of the individual entries on the International Chocolate Salon site.

Generally, all of the contestants have online stores where you can order their toffee so you can try them yourselves. However, like other chocolate products, they might not be shipping right now due to summer heat. So maybe put a reminder on your fall calendar to order something from one of these award winners. I hope you can enjoy them like I did.

This site uses Akismet to reduce spam. Learn how your comment data is processed.