Chocolate sunscreen and other health benefits

Just in time for Indian summer, another reason to eat chocolate daily: It protects against sunburn. According to SmarterTravel.com, scientists have found that foods that are high in flavonoids, such as chocolate, provide some protection against sunburn and long-term skin damage (like skin cancer).

Lucky for us, you have to ingest the chocolate. Slathering it on like sunscreen would just be a waste.

And there’s more, an experiment done in Germany in 2006 showed not only the sunscreen effect, but supposedly left women with smoother skin. This is a beauty regime I can totally get into.

Healthy on the inside

Researchers continue the good chocolate news. In a report published by The Cochrane Collatoration, an international organization focused on health-issues research, cocoa flavanols reduced blood pressure in a small but statistically significant way. They say more research is needed to measure the long-term effects. I bet they have no shortage of volunteers for these studies. 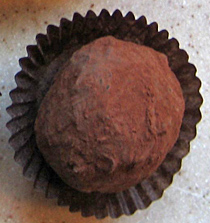 (For illustration purposes only. Not a suggested serving size.)

And finally, maybe the best chocolate health news of all: Another recent study debunks the myth that eating chocolate makes you fat.

Researchers in San Diego proved their theory that the metabolic benefits of chocolate balance out the calories in chocolate. In fact, they found that of the 1,000 participants in their study, those who ate chocolate most often had the lowest body weight index (BMI) — even if they ate more total calories and didn’t exercise more than the other participants.

If you are interested in all the technical details of the study and other interesting tidbits about chocolate and health, you can listen to an interview with the lead researcher, Dr. Beatrice Golomb. It’s long, but you can start listening at around 7:00 where she discusses how the fat in chocolate is important because it blunts the insulin bump of the added sugar, then listen up to 28:30 when she says you should eat chocolate like it’s a supplement — daily for consistent benefits.

And you gotta love any scientist who claims chocolate is her favorite vegetable.